On the Thursday before Labor Day weekend, with crisp autumn distinctly in the air, I decided to hike Cat Mountain. I parked at the trailhead on Edgecomb Pond Road. The morning was cold for late August, and the clouds were dark and angry and itching to drizzle. The sun was trying to break through the cover and not doing well. I threw a long sleeve shirt over my head and crossed my fingers for better weather at the summit.

Mine was the only car in the small lot on Edgecomb Pond Road. It’s not much of a parking lot at all, so I pulled off to the side as far as I could. Cars may have to park on the road on a busy day at this trailhead. I grabbed my backpack and hit the trail around 9 a.m. There’s no trail register at this trailhead, but it isn't a complicated trail system. Stay on trail and eventually you'll reach a parking lot.

Cat Mountain, located only five minutes outside of bustling Bolton Landing, is owned by the New York State DEC and maintained by the Lake George Land Conservancy. The trail system leads to the summits of both Cat and Thomas Mountains. From Edgecomb Pond Road, the trail I took is 1.9 miles from the parking lot to the summit. For a longer hike to the summit of Cat Mountain, park on Valley Woods Road.

The red trail leads away from the parking lot on Edgecomb Pond Road. It’s a wide dirt road that follows the southern and western shore of Edgecomb Pond, which serves as Bolton Landing’s drinking water. The pond was like a window pane, smooth as glass, placid and undisturbed as it curved around the pond. I would’ve liked to do a little slalom skiing before I continued up the trail.

The dirt road that serves as the beginning of the red trail is wide and dry, sometimes turning into sand. Pine needles cover the road and large rocks poke through the earth. So far, this is only a mellow walk through the woods. I can hear birds chirping high in the trees and the distant din of dump trucks driving Bolton Landing’s quiet back roads.

As you walk this part of the trail, the pond is always glimmering on your right through the thin forest. A small herd path leads down to the shores of the pond so you can snap a close up picture or two. When the trail breaks away from following the banks of the pond there’s what looks like a small beach and a fire pit. Fires are allowed but must be watched at all times. 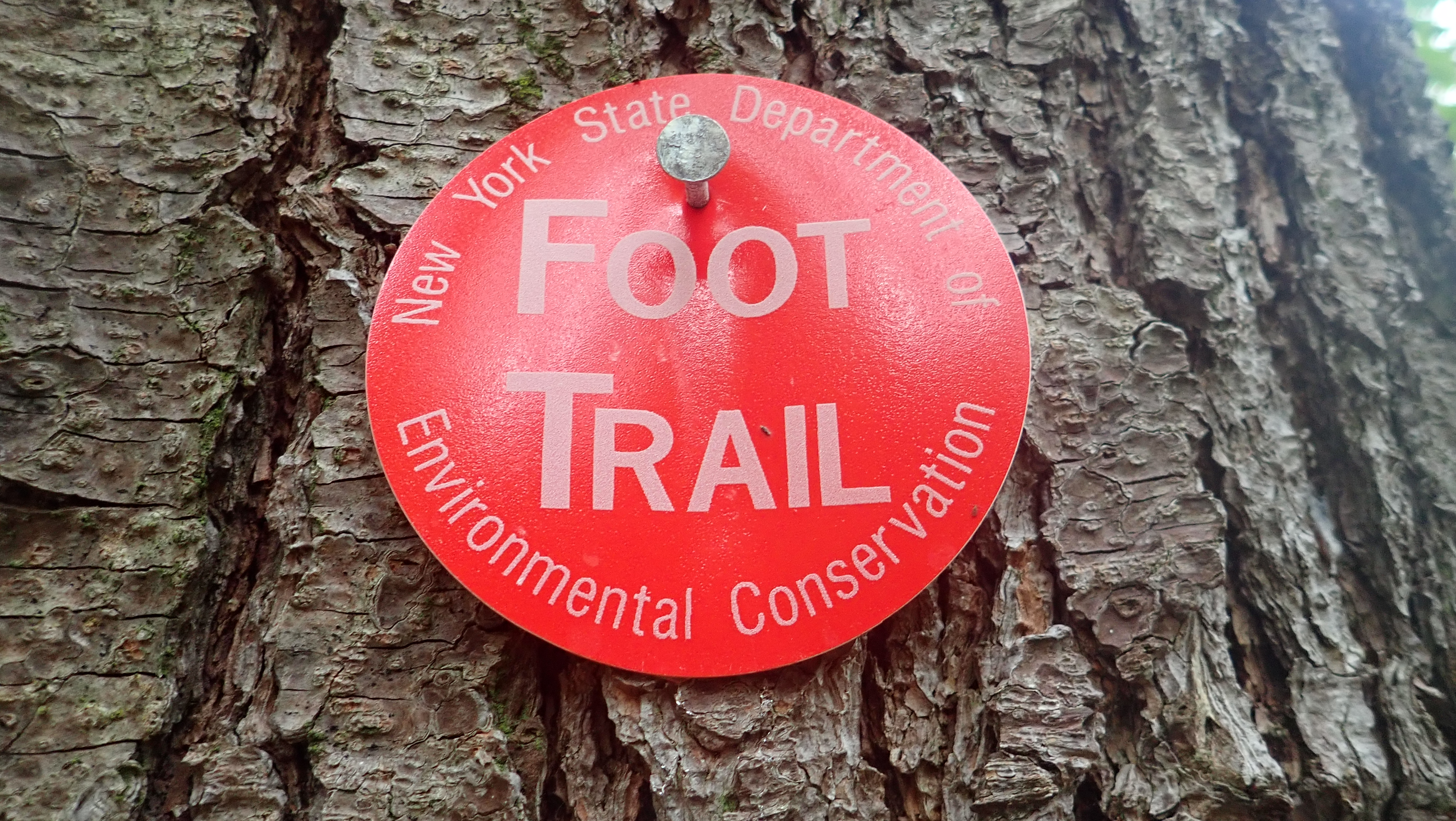 The red trail runs for 0.7 miles before intersecting with the blue trail. Every trail in this preserve is well-marked. There are rarely times where you can’t see a red marker posted on a tree. This is another trail that would be tough to get lost on. I did get momentarily confused when I saw the red trail split in two. One trail runs steeply up a ridge to the summit of Cat Mountain. I kept hiking straight instead of hanging that sharp left. The weather was still chilly.

The trail remained unchanged after I left Edgecomb Pond in my rearview mirror. It sometimes widened to almost ten feet across, running straight and flat through a widely spaced forest of tall pines and green ferns.

I came across what I believe to be Finkle Brook, which feeds into Edgecomb Pond and runs through many Bolton residents’ backyards. The water was low and slow, dribbling downhill around rocks and logs. I met Finkle Brook again, this time having to cross it, farther down the trail next to what looks like some sort of bog. After crossing the brook I came to a gate.

The gate is up to stop ATV riders from damaging the trail. I had to duck under the chain to get around it, so I assume it does a solid job of keeping ATVs out. After you duck under the gate, banging your head in the process, take a sharp right, following the obvious sign that reads “TRAIL.” The sun was finally starting to warm me up, and I took my long sleeve shirt off. The red trail still wasn’t much of an uphill climb at this point

This is a good time to point out that a ton of old, disused roads crisscross the marked trails. Follow the trail markers to make sure you remain on the correct route.

The trail narrows following the right turn after the gate. It’s still made up of sand, dirt, and grass, with rocks jutting out of the ground. Small pine trees and bushes loom over the edges of the trails, keeping you on a single-file, vibrant green path. At this point I was surprised to not be heading uphill yet.

I almost stepped on a wood frog just as I was converging on the blue trail. It was tiny and light orange, a lot like the Eastern newts you see all over the Adirondacks. Its eyes were gold and black, and it had two ridges running up its back. I took a left here, onto the blue trail and the uphill ascent of Cat Mountain. 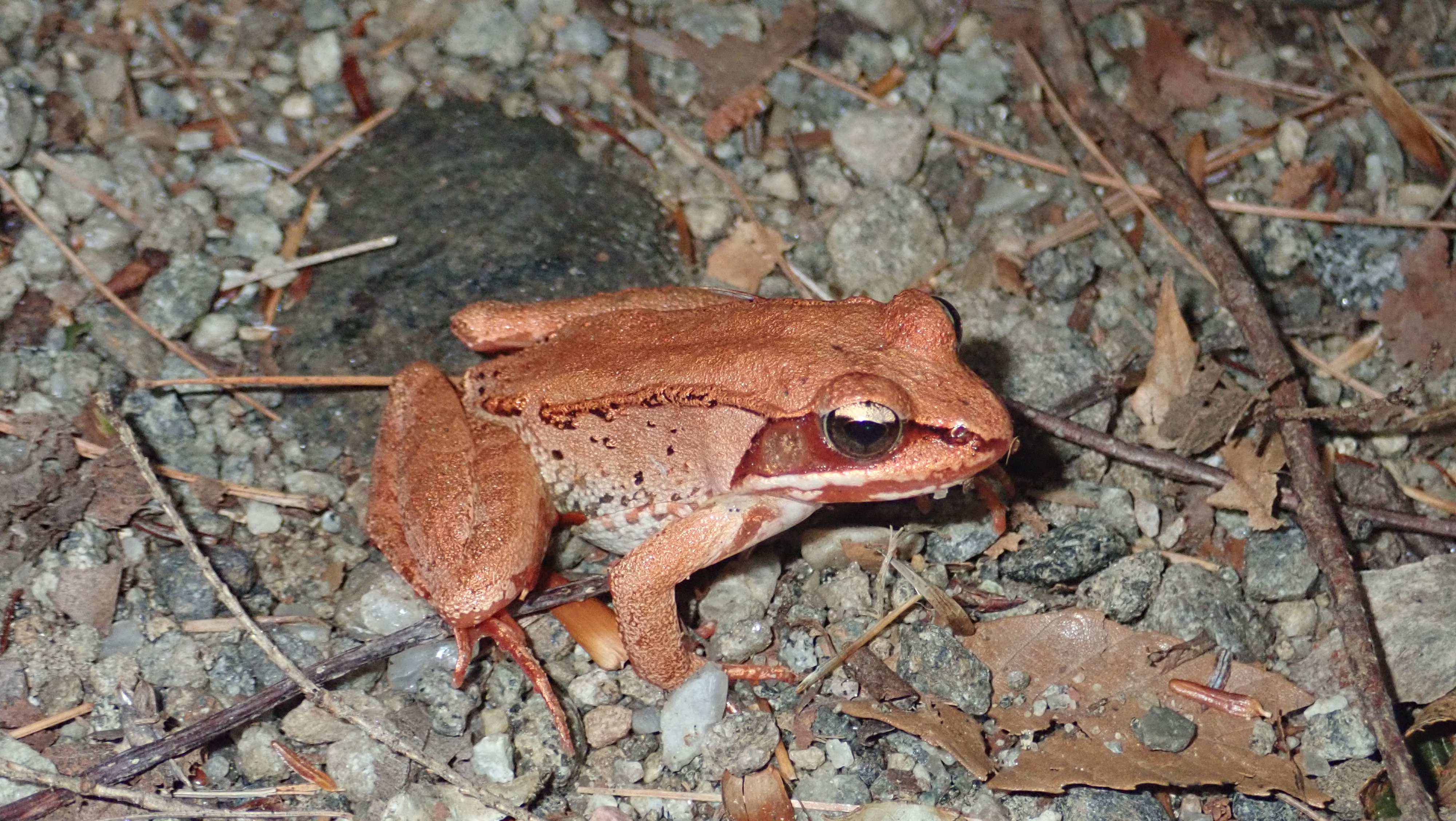 And, the trail remained the same. I walked and strolled, one foot in front of the other, for a good clip. This hike isn’t long, but I felt like I had been walking forever. Very little of the hike had been uphill until I was greeted with a left turn in the trail and a cascade of grey rock. Finally, the trail had turned up a bit. Some of the rocks in this part of the trail were loose, probably from being stepped on over and over again.

After a while there’s another blocked off road. This time, an arrow and a blue trail marker posted on a branch stuck in the dirt pointed me to the left. To my relief, there’s a change in trail style. The trail narrows again, changing from broad, level, and littered with rocks to cramped, twisted with roots and dirt. The trail runs up the mountain, and then leads you sideways, winding around trees and rocks in relaxed switchbacks. Then, another fork in the road. On this “Choose Your Own Adventure,” I hung another left. Going right puts you on the yellow trail to Thomas Mountain. A left continues the blue trail to the summit of Cat. 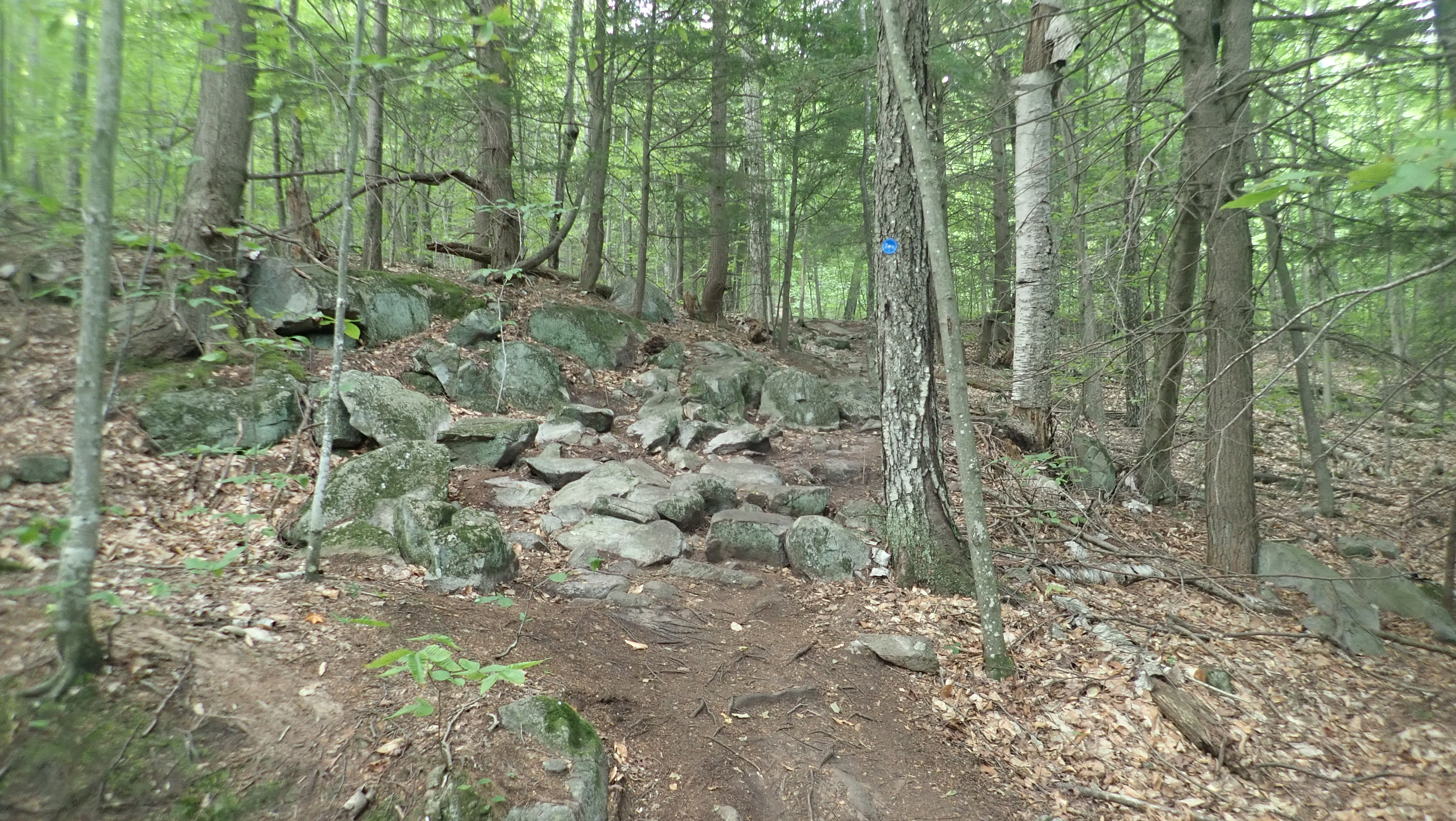 The trail gets steeper in this section. You’re still meandering around rocks and trees, which is a more interesting hike than the wide roads of the previous mile. As you look to the west it’s clear that the trail is coming to an end. You can see open sky – that tell-tale sign. One more blue marker and trail arrow points toward the right and you’re at the summit.

And wow, that view. It’s stunning. The summit is extensive, with tons of room to walk around or have lunch. It’s mostly bald rock with some shrubbery poking around. There are gorgeous views of the Narrows to the north, Lake George, Dome Island, Long Island, and Trout Lake below, and mountains for miles all around. The view from Cat Mountain is one of the best in the Adirondacks. 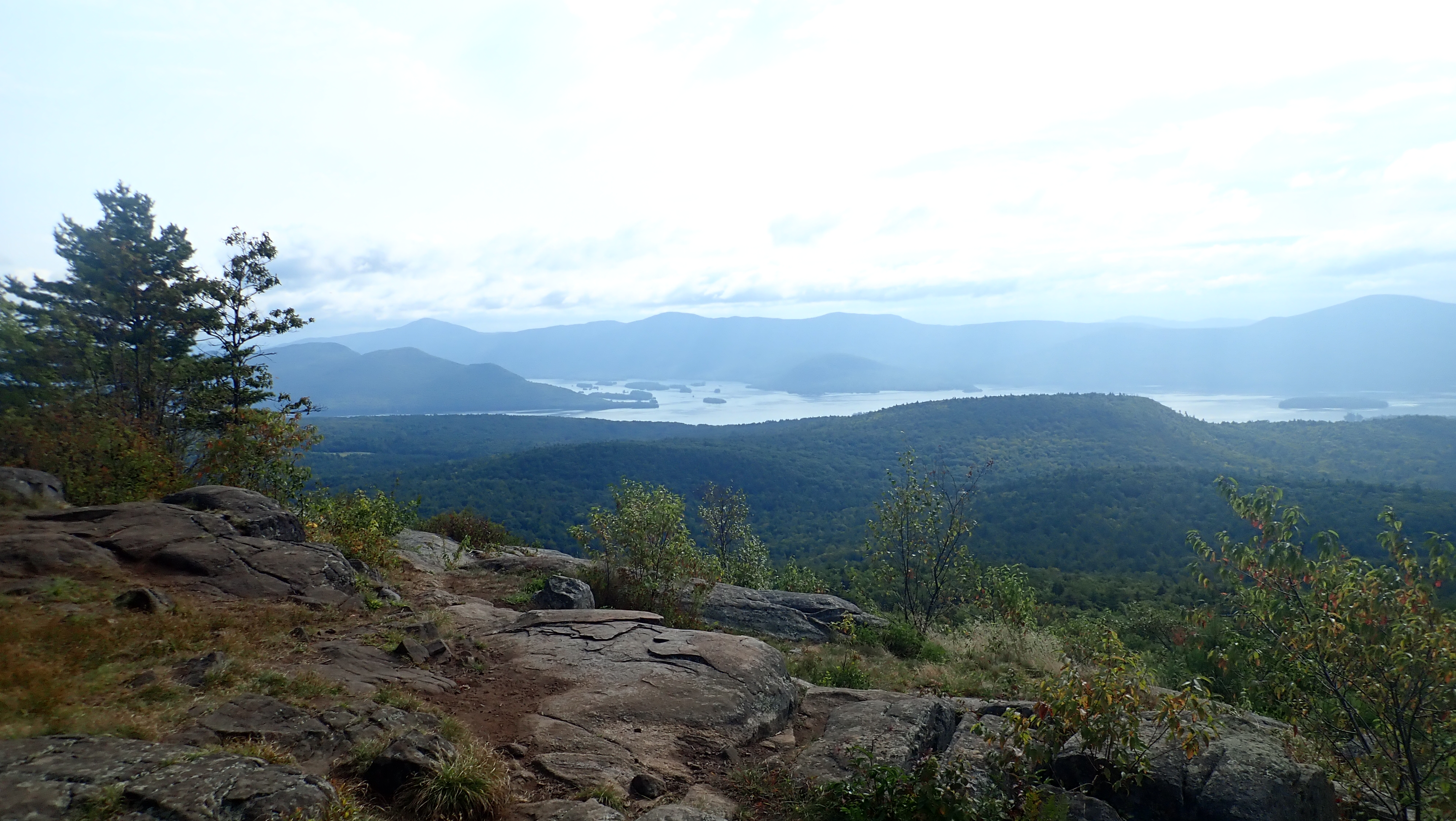 I milled around the summit for about half an hour, taking a bunch of bad pictures, and then hooked back up with the red trail towards the north end of the summit to hike down. This section of the red trail would connect me to Edgecomb Pond, a short walk from the parking lot. This is the steep way down; one of those descents that require you to grab tree after tree like you’re crossing the monkey bars. This portion of the red trail follows a ridgeline with sheer cliffs on the right in the beginning. Red trail markers and red painted squares adorn trees to show you where you’re going.

I was relieved that I didn’t come up this way. Flat areas to rest are few and far between. Occasionally, the trail dips into a shallow valley, but you’re mostly heading downhill. The woods on this part of the red trail were spread wide and the sun was shining through and hitting the trail. After about a half hour of stumbling down the trail I converged onto the other red trail, on the shore of Edgecomb Pond. From there, I only had a short walk around the pond to find my car. In my 2.5 hours on the trail I hadn’t seen a single soul. The sun was gleaming over the pond. 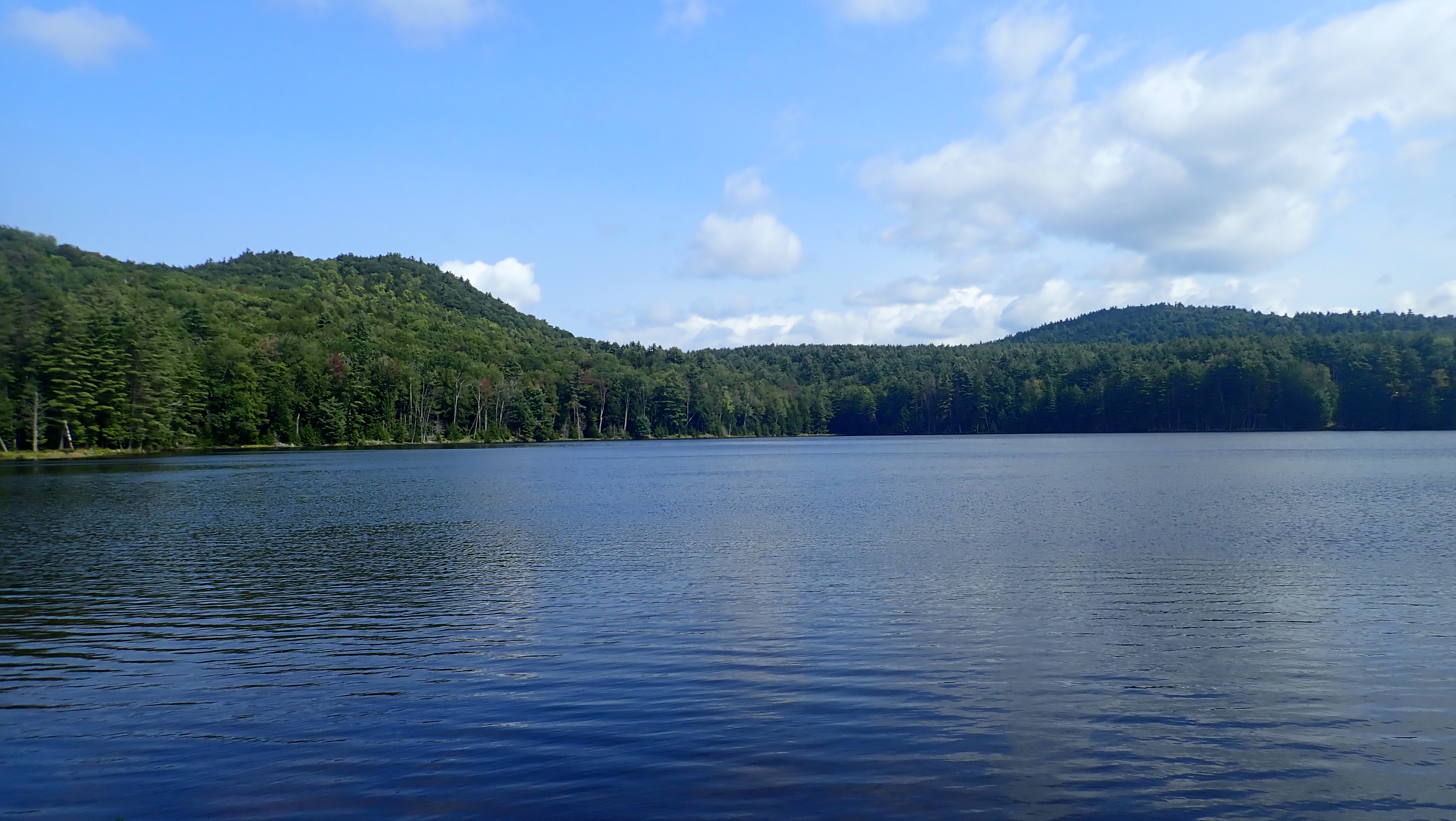 I would rate Cat Mountain from Edgecomb Pond as a challenging hike. There’s a steep section or two, and you’re in for a 1.5 to 3 hour hike depending on how quick you’re climbing. The most challenging part would be taking the red trail directly to the summit. The view from the summit will always be worth the hike.