The Lake Theatre has been delivering professional dinner theatre to audiences for 50 years!

Have you ever been to a dinner theatre? I’m not talking about Medieval Times or enjoying a milkshake served by a Marilyn Monroe look alike before she jumps on stage for a few songs.  Those are fun and I like them a lot but what I’m talking about is combining the concept of dinner and a show into an event.  Having a great meal and then seeing a real show put on by a professional theatre company without having to leave your seat.  Naively, I assumed we’ve all had this experience.  Imagine my surprise when I learned that most people haven’t even had the opportunity.

Lake George is home to The Lake Theatre which performs two shows per year in a dinner theatre setting at the Holiday Inn Resort.  The hotel culinary team provides the dinner and The Lake Theatre produces the show.  2017 marks the 50th anniversary of the theatre company.

I grew up in the Lake George Area and visited the Lake George Dinner Theatre many times with my parents.  As a teenager, I didn’t realize what a treat that was.  It had always been there, after all, entertaining audiences since before I was born.

Yesterday, Terry Rabine, The Lake Theatre Producer, agreed to have a chat about the theatre, its 50 year history, and its future.  One of his comments was particularly surprising.  Did you know there are only 16 professional dinner theatres in the country?  I didn’t.  Most of those are huge, seating 300-500 people, while The Lake Theatre seats 125 providing the most intimate dinner theatre setting in the country.  If you didn’t grow up in or visit an area with a dinner theatre, you’ve probably never had the opportunity to experience something that has become an annual tradition for me.

This revelation has shaken me somewhat – as is often the case when meeting one’s privilege.  So today, I want to share with you what makes The Lake Theatre experience so special.

After seeing the first show of the season, Last of the Red Hot Lovers by Neil Simon, I went home and bought tickets for the second show.  It was that good.  Don’t take it from me.  My husband, who’s not at all the theatre nerd I am, said it was his favorite show – ever.  He couldn’t tell me why; just that he really liked it.  Yes, some of the humor was dated – especially for us.  We’re in our thirties.  Yet it was timeless and appropriate for the story and the 60s era the play lives in.  The actors were incredible.  This is where real dinner theatre shines.  Witnessing true talent in person, whether it’s an athlete on a sports field, a chef at an exceptional restaurant, or a performer on stage demands a moment of surrender and awe.  The Lake Theatre delivered those moments, one after the other, to rolling laughter from the audience.

Last of the Red Hot Lovers plays through September 2.  The second show of the season, The Great Kooshog Lake Hollis McCauley Fishing Derby opens for a seven-week run on September 14.  It’s written by Norm Foster, often called the Canadian Neil Simon.  Tickets for both comedies are available on The Lake Theatre website.

So what’s it like to attend the most intimate dinner theatre in the country?

After being greeted in the lobby, guests are led into a room with a stage and shown to a table.  There are no bad seats due to strategically placed platforms.  After meeting our table mates, my husband and I settled into our salads and ordered some drinks.  The culinary staff at the Holiday Inn is efficient.  For us, part of the show is watching them feed 125 people three courses in unison.  Not one complaint or mistake was made when we were there. 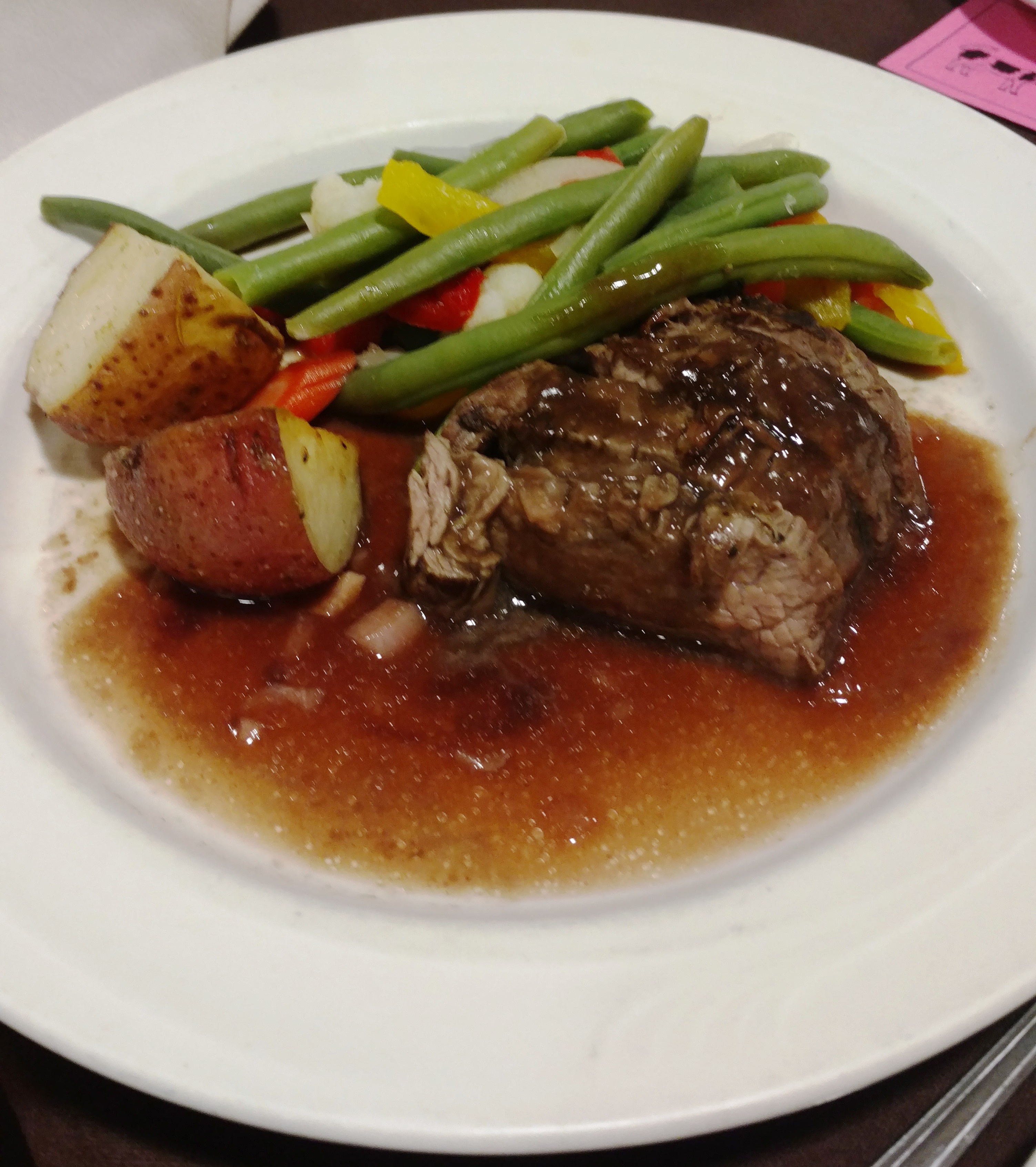 The food was delicious with four different entrée choices.  I opted for chicken and my husband ordered beef.  Both were prepared perfectly and complemented by vegetables and potatoes.  The meal is capped off with a slice of cheesecake. 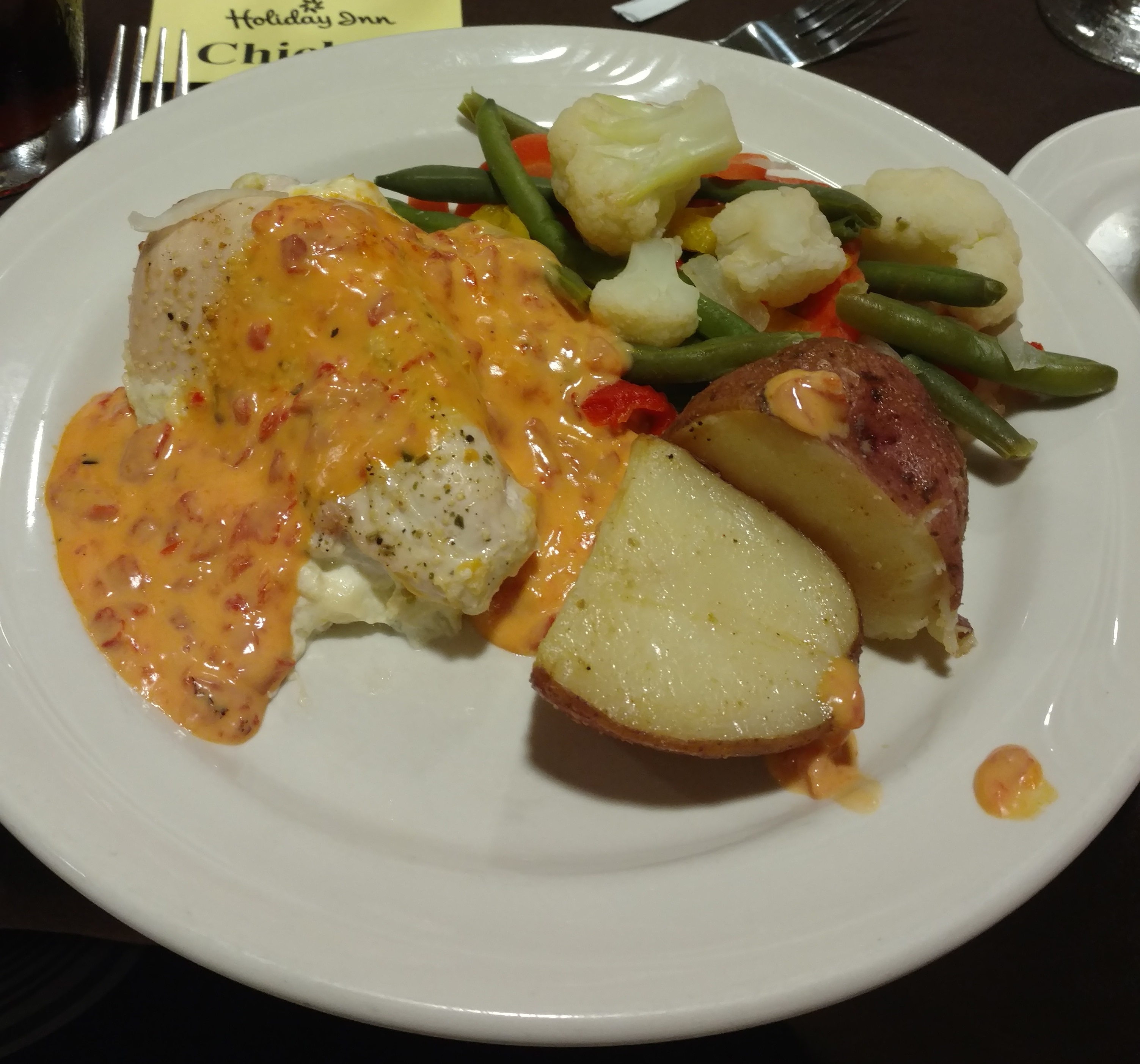 There is time after dessert to adjust, spread out, grab another drink and stretch your legs before the show starts.  Coffee is available at the table throughout the show and we requested a basket of rolls as well, which our server was happy to accommodate.

Terry kicks off every show with a personalized speech, welcoming the audience, recognizing any groups or special occasions being celebrated by the audience, and delivering a few one-liners to warm everyone up before the show.  Then, the lights dim as a wave of anticipation fills the room.  Some movement from the stage draws your attention, lights illuminate the set, and the magic begins.

As the actors play their parts, you’re drawn away from your table and second cup of coffee and into a space somewhere between reality and imagination.  If you’ve seen live theater before you may know this realm.  For me, I can only find it when the actors are delivering a genuine, authentic performance – something that sets professional theatre apart.

When the lights go down for intermission, it takes a moment to adjust as you come back to yourself and remember that you’re sitting in a room with 124 other people and a now cold cup of coffee in front of you.  You stand, shake off the theater magic haze, refresh your coffee and engage in one of the many conversations about the show and experience you’re sharing with the other people in the room.

Then the lights dim and the actors again draw you into the story for the second act.  You realize you’re smiling and laughing with everyone else in the room.  The show climaxes as the actors give everything they’ve got to relay the play’s conclusion.  Then they exit, leaving you wanting more.  When they come back to take a bow, the whole room erupts in applause and stands as a tribute to the characters they now know and the team of people that worked to make sure their evening or afternoon was one to remember.

That’s been my experience at every show I’ve seen at The Lake Theatre.  I can’t say exactly what it is that makes the shows there so reliably enchanting.  Maybe it’s the dinner or the professional company or the passion of the audiences.  I can say that every time we attend, my husband and I hear similar praise from others in the room.

I encourage each of you to cross this item off your bucket list.  If you’re visiting Lake George, this is your chance.  If you live here, this is the year!  After 50 years, The Lake Theatre is seasoned, proven, and ripe to deliver you a delightful evening of entertainment.