An easy loop trail in Queensbury

Winter is the perfect season to explore some of the small, lesser known preserves we have in the Lake George Area. Summits like Fifth Peak, the Pinnacle, and the Schumann Preserve at Pilot Knob are popular, and for good reason, but many of the quiet walking trails around the region are worth exploring.

I pulled into the empty parking lot at around 1 p.m. There wasn’t a cloud in the sky and the sun was beating down on a 15 degree January afternoon. The lot was a sheet of ice, so I parked as close as possible to the beginning of the trail, turned off my car, and started walking. 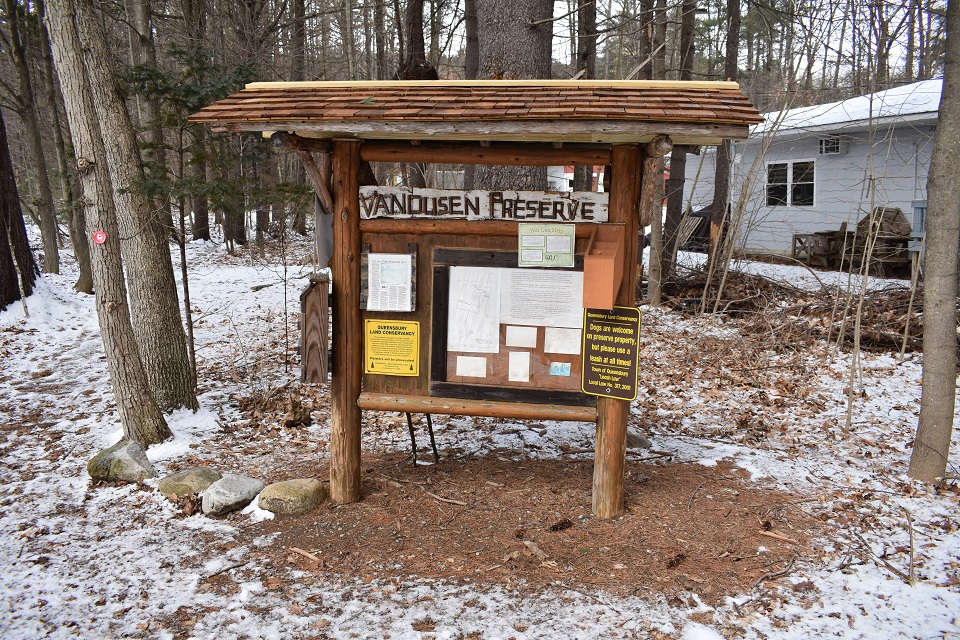 The trail was narrow and snow-covered. A thin layer of ice remained under the packed snow. I had a pair of spikes in my bag, but traction on the trail seemed good despite the ice. There were boot prints and dog prints all over the trail. 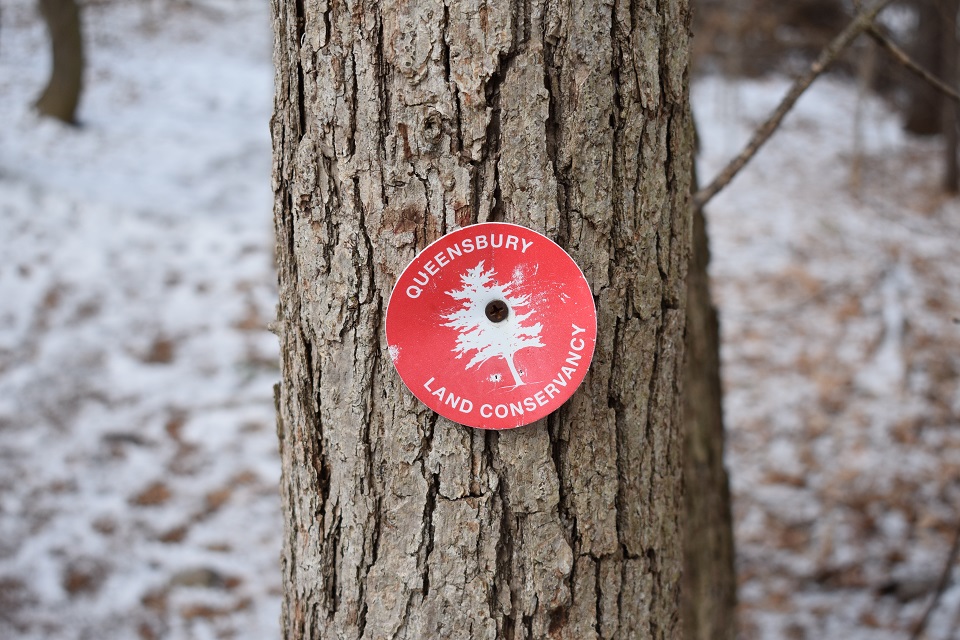 The path began flat and straight through thin forest. Houses from a nearby neighborhood could be spotted through the branches to the right of the trail. Red trail markers made following the trail easy. No Trespassing signs adorned several trees off the trail. Downed trees littered the ground.

After winding through the woods for a stretch, the path started to go up. The incline was gradual, and the thin layer of snow provided enough traction to stop me from slipping. The sound of passing cars from the nearby neighborhoods melted away as I climbed. 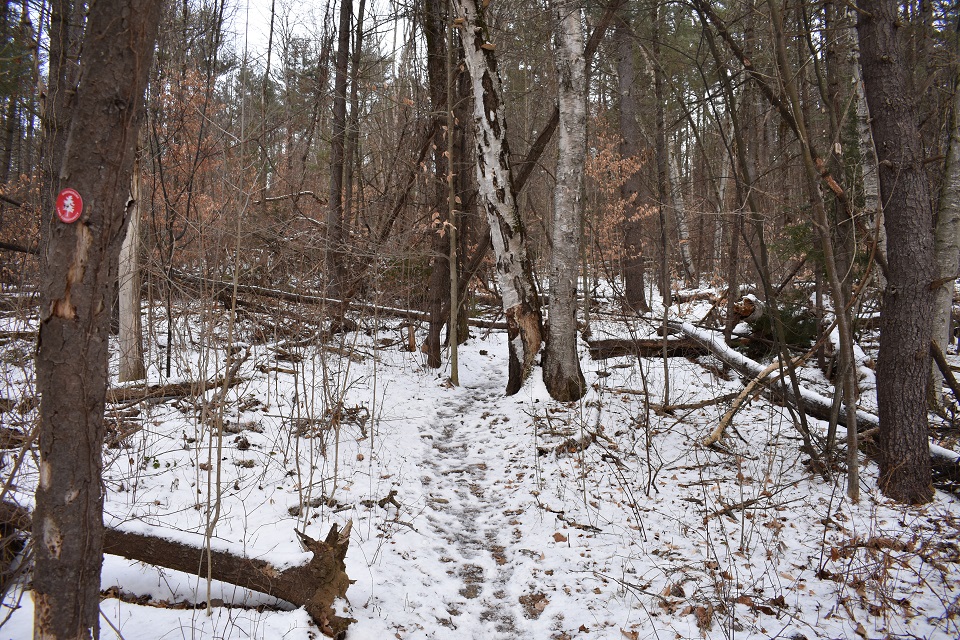 The climb was steady and moderate, and I was breathing heavy by the time I reached the only junction in the Van Dusen Preserve. I hiked to my right, intending to complete the full loop. It was a cold afternoon, but between the hiking and the sun I had to unzip my jacket.

The single path remained the same throughout. It wound snakelike through the woods, with gradual inclines followed by stretches of straight and flat trail. I had to stop a few times to find the next bright red trail marker, and once had to take my time heading downhill to make sure I didn’t fall on the ice. 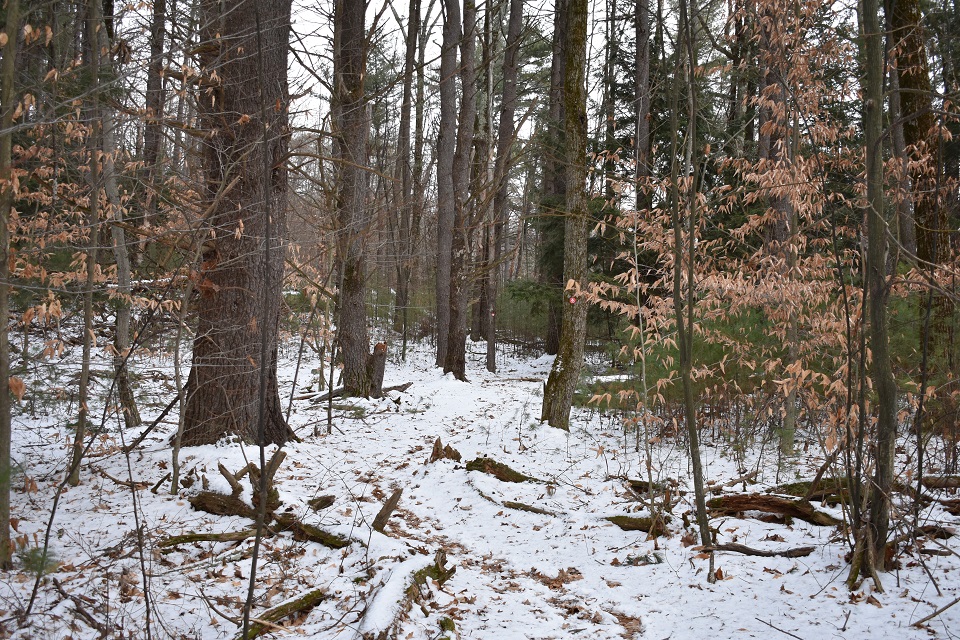 Eventually, I reached a red arrow posted on a tree that pointed me uphill. It looked like the trail was leading to a summit of some sort. I trudged up the hill, easily the steepest portion of the hike, to find a medley of “No Trespassing” signs and arrows pointing me back down the hill. There was no summit and no view, other than some distant Queensbury hills. 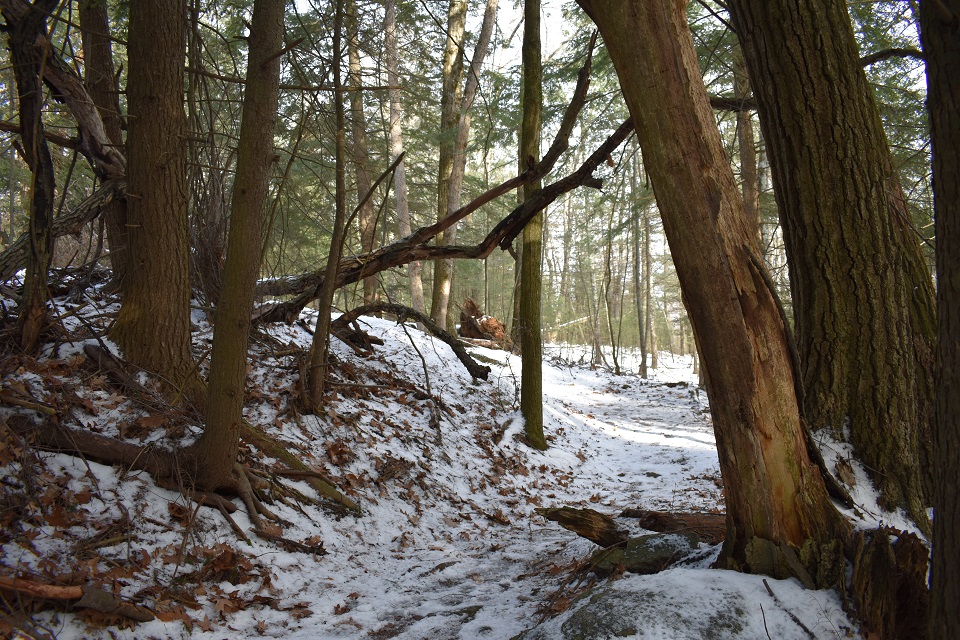 Without much of a reason to stop, I started to head back downhill, being careful not to slip on the warming snow and ice. I came to a steep hill and found someone’s black sneakers filled with snow off the side of the trail. They were frozen to the ground and unwearable. Shortly after skidding and sliding down that final hill, I was back at the junction I had passed earlier. 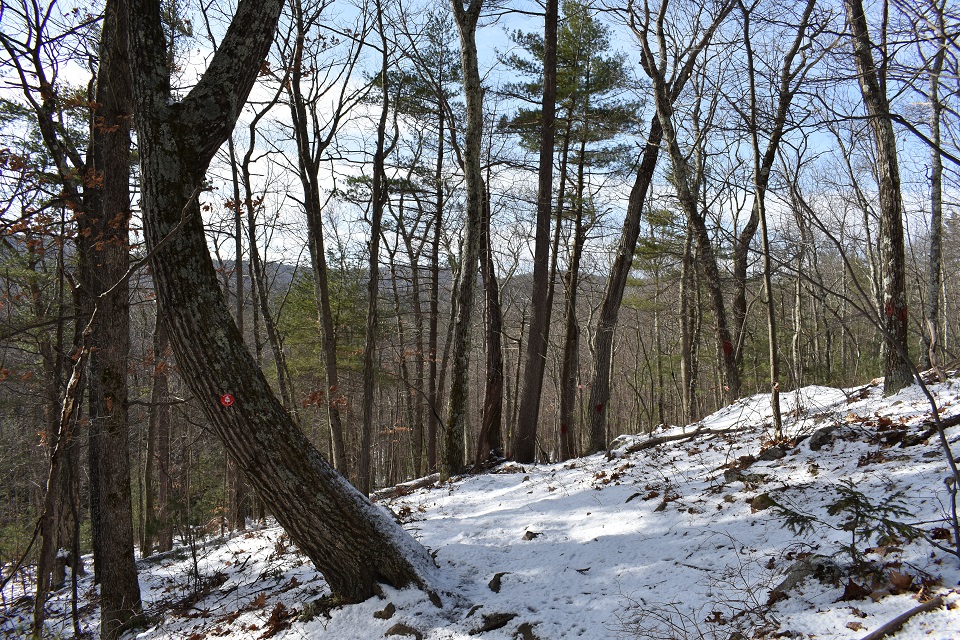 I followed the trail back towards the parking lot, and the neighborhoods came into view on my left. I passed a man on his way into the woods for a hike. He asked about ice on the trail, and I told him it was softening up. It was a good day to hike the Van Dusen Preserve.

Overall, the Van Dusen Preserve is an easy hike. Beginners will enjoy the simple loop trail and its few short inclines. Kids and dogs will love the trail as well. Experienced hikers should opt for something longer and more challenging, such as Pilot Knob or Cat Mountain. 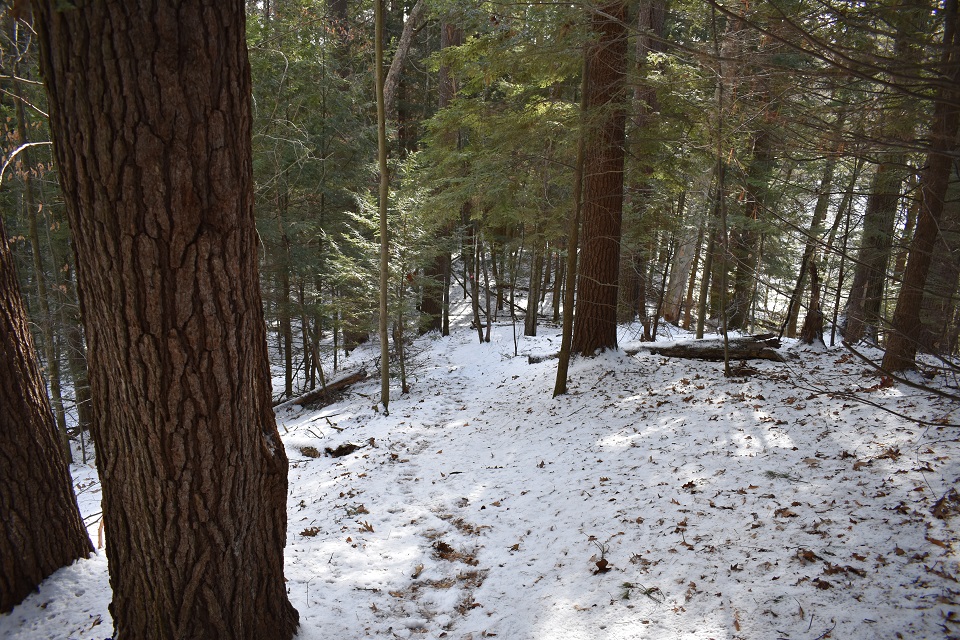