Quick Facts About the Meadowbrook Preserve

Queensbury isn’t a mountain town. It lies just south of the Adirondacks. However, the Queensbury Recreation Department has done an awesome job creating natural spaces for its residents and out-of-towners to wander. We’ve already written about Gurney Lane, a web of nature paths, mountain biking trails, and other sources of fun. During a snowy winter, I wanted to get out and explore more of these small, simple rec areas that encourage people to get outside without forcing them up steep mountain trails. 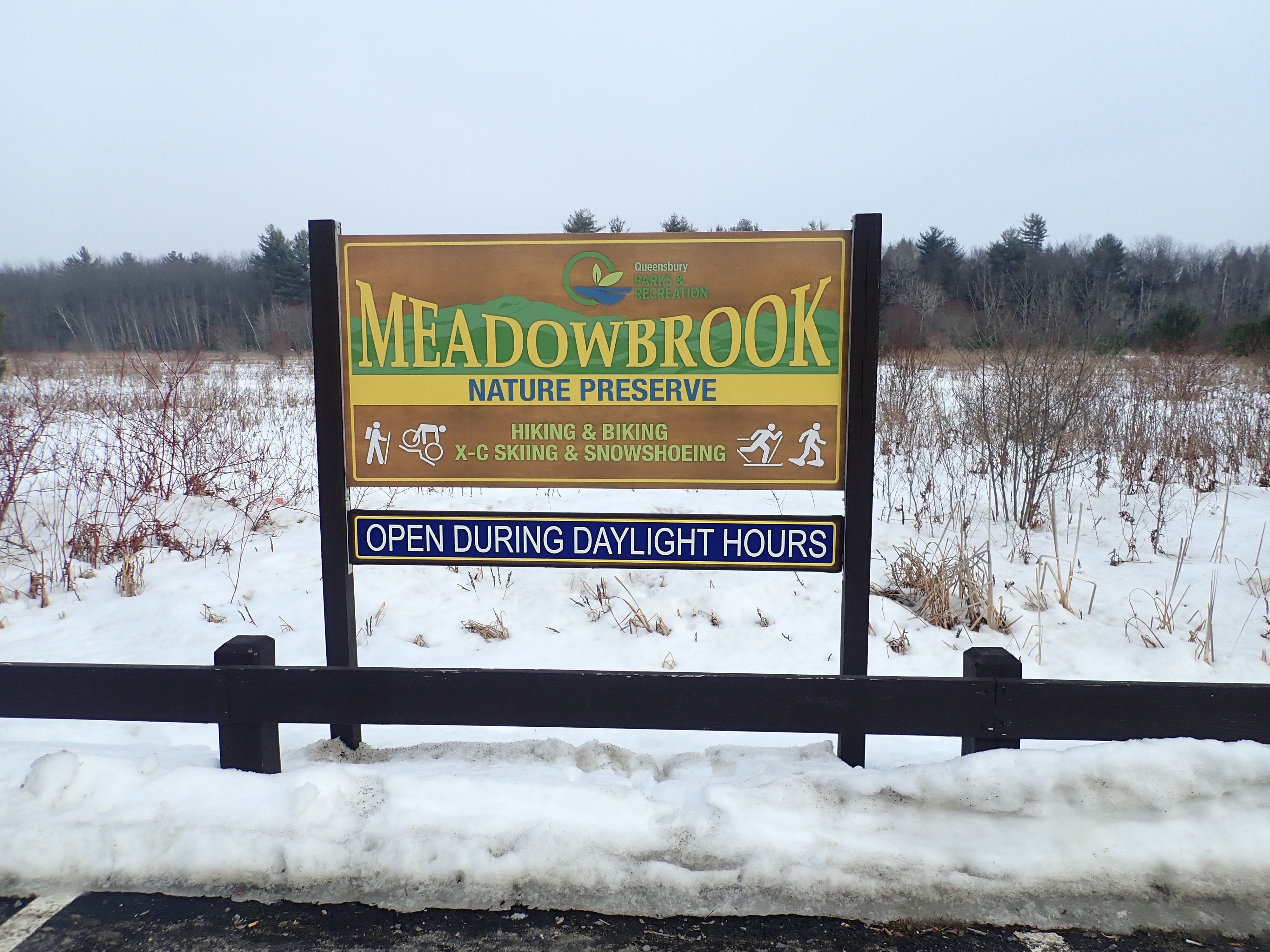 In the spirit of exploring these spaces, I decided to check out the Meadowbrook Preserve, a 44-acre nature park. Set just off a busy commercial district and amid snaking neighborhoods on Meadowbrook Road, this area is a dog and dog owner’s haven. There isn’t an incline in the entire preserve, and the paths are wide and well-marked. Perfect for an afternoon stroll with the pooch. Unfortunately, all I have is a house cat, so I ended up going alone.

I pulled into an empty parking lot of about eight spaces, grabbed my handy-dandy office camera, and stepped out of the car. The signage at the front of the preserve advises folks that the land is pet-friendly, but to please take care of your dog’s waste. Another sign mentioned the educational signage that could be found on the trails. With that, I started on the blue trail.

The 0.45-mile blue trail begins at the parking lot and brings walkers into the woods from three different directions. I chose to walk to the right. The trail was wide and flat, plenty stomped down after a few recent snow storms. I was only wearing my Merrell hiking boots, but some sort of spikes would have been useful, as the trail was packed to the point of being slippery in some spots. 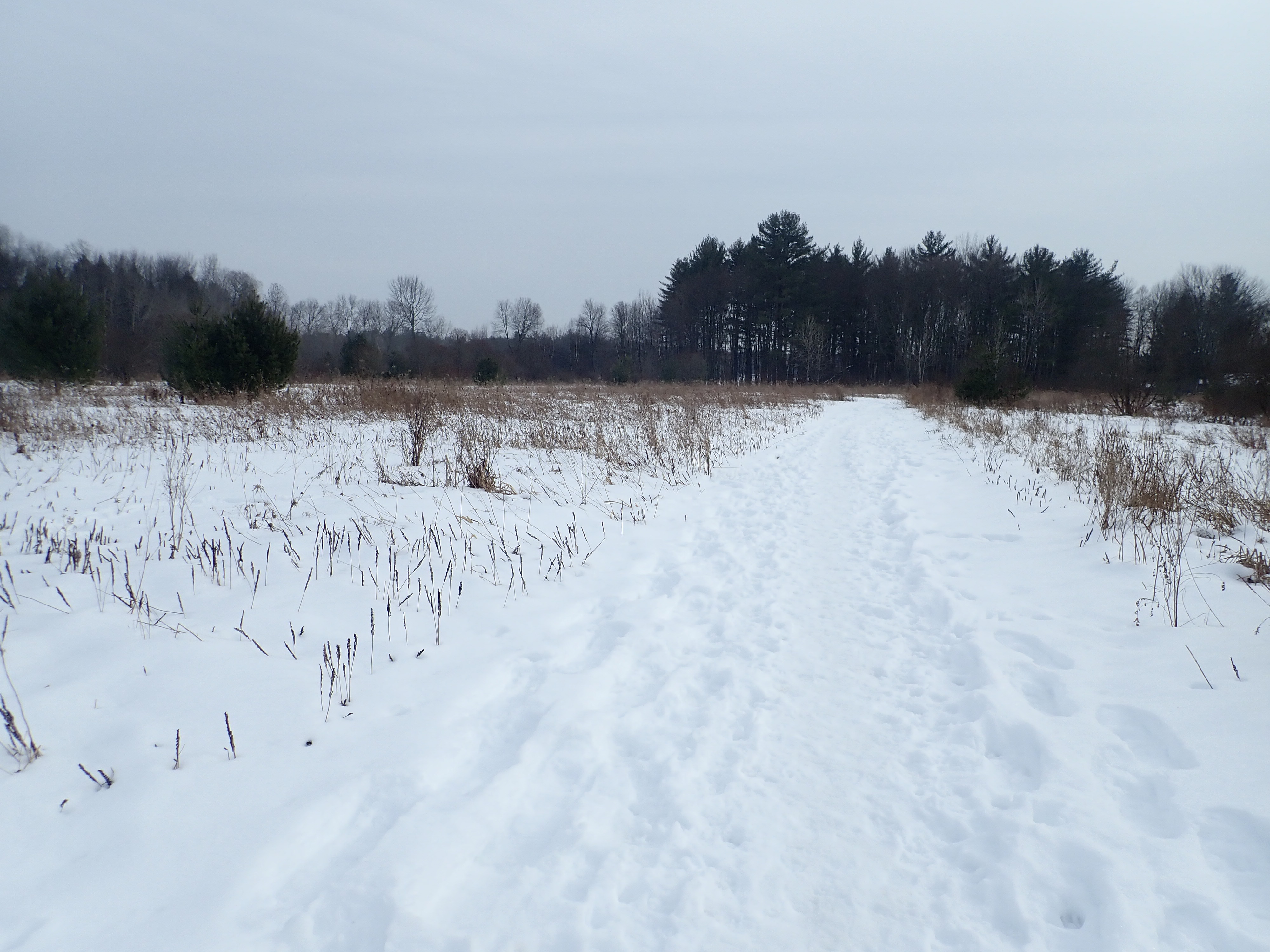 A meadow surrounds the blue trail. In warmer months, the meadow is probably wet, wild, and teeming with animals, with tall scrub lining both sides of the trail. In the winter, it’s beaten down and covered with snow. I walked until I reached the wood line, which connected me with the red trail. 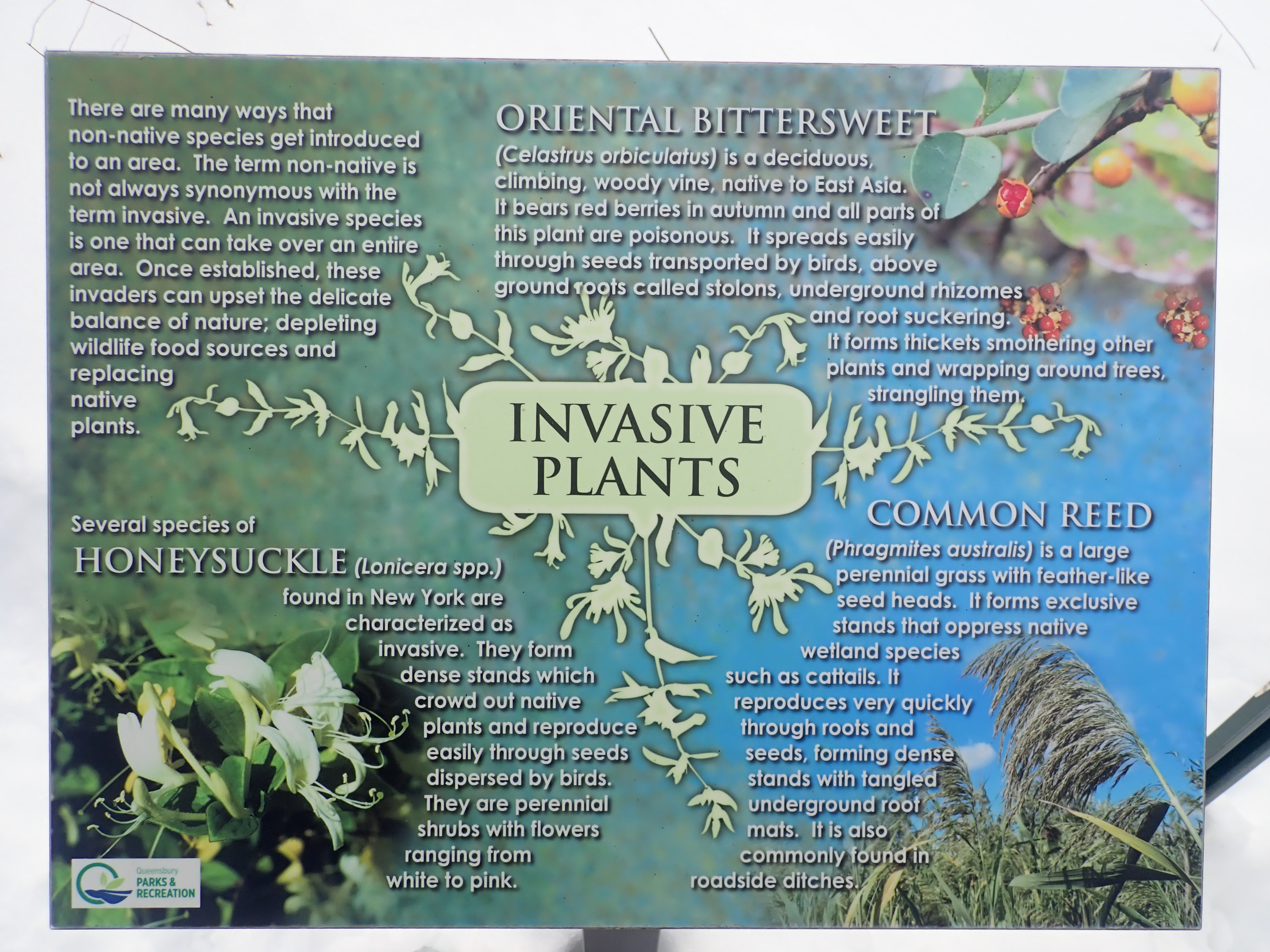 The 0.85-mile red trail marks the beginning of the wooded section of Meadowbrook Preserve. This is where I discovered the first educational sign, which detailed the danger of invasive species. It told of non-native plants that often take over entire areas, such as honeysuckle, which crowds out native plants, and the oriental bittersweet, which is a poisonous vine. Invasive species are a big issue, especially in our local waterways.

More signs identified the species of trees that were growing in the forest. I stopped and trudged through sometimes knee-deep snow to read about trees like the trembling aspen, the Eastern white pine, and the grey birch. Seven or eight other trees were noted throughout the rest of my walk. 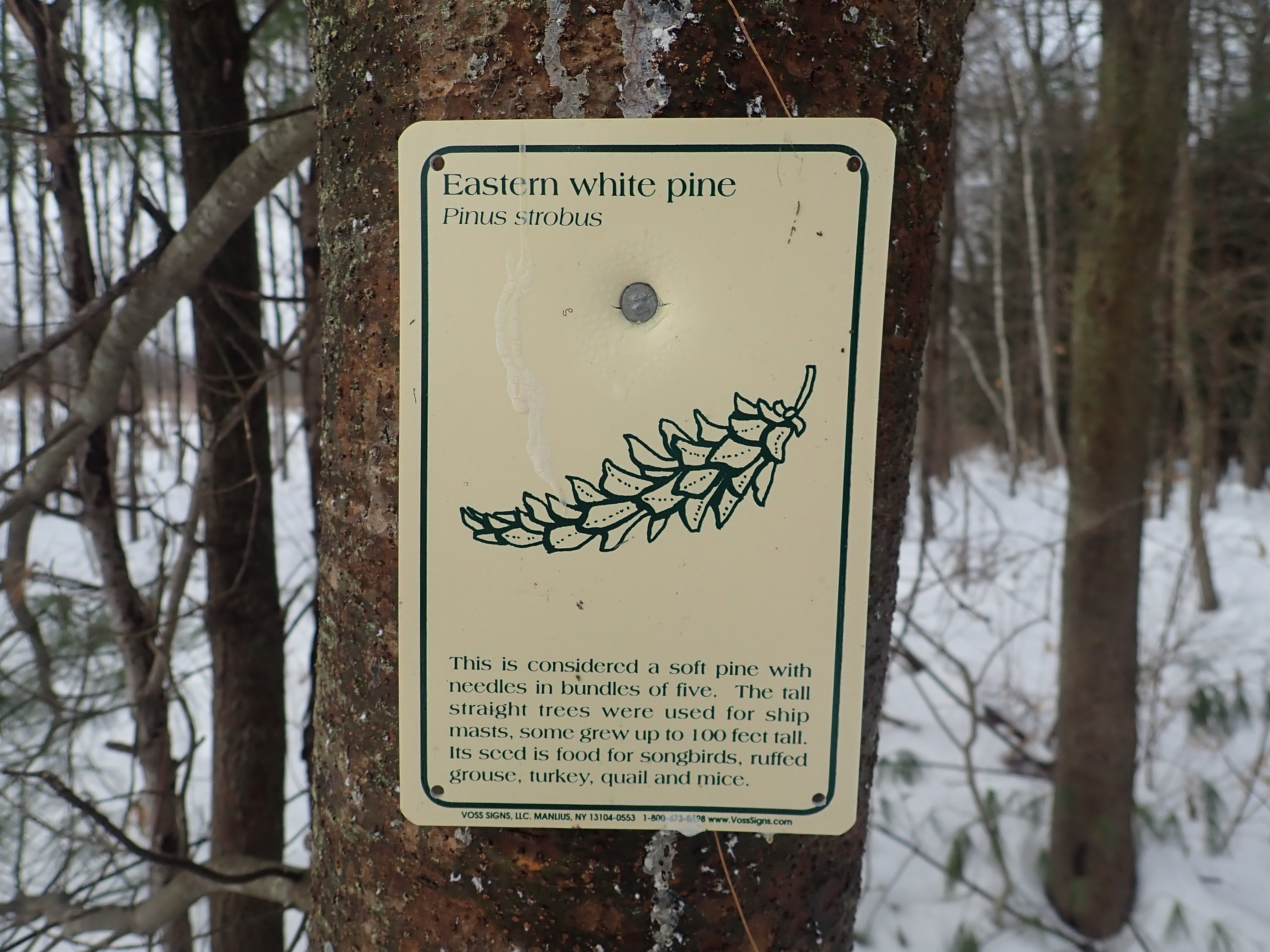 The red trail is studded with trail markers and runs through a compact forest. The warm weather was melting snow on the trees, causing a constant drip throughout the forest. The snow was deep, ranging from my shins to my knees in some parts. Dog prints strayed in a mad pattern throughout the forest, zig-zagging between trees and under bushes. The day was cloudy, making the forest dark and bleak. Eventually, I came to another sign discussing coniferous and deciduous trees. I stopped to read it because I have virtually zero knowledge about anything growing in the woods.

Eventually, I came to an intersection. I could either continue on the red trail’s inner loop or walk the red trail’s short loop, which took me deeper into the preserve. I took the short loop which remained narrow and packed down. I found another sign – “Wetland Flood Plains,” describing the flood plains of the preserve. 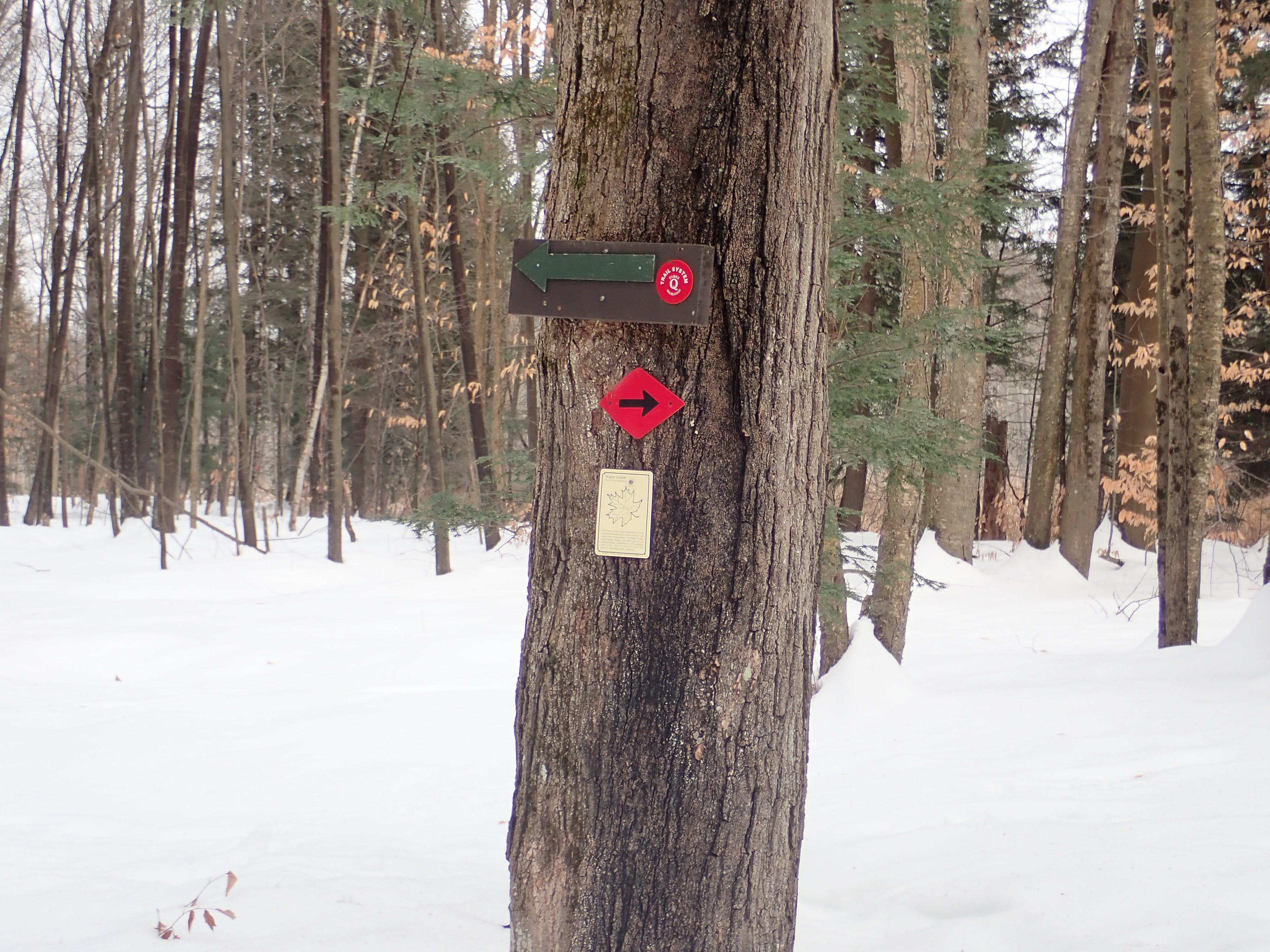 This is where I found the coolest part about the Meadowbrook Preserve. A short herd path led away from the flood plains sign to Halfway Brook, a slowly moving mass of water. It was iced-over in sections with large trees looming over its banks. Trees that had fallen over the brook long ago held inches of snow. It was a peaceful spot, even with the din of cars and tractor-trailers on nearby Quaker Road. I couldn’t see any fish, turtles, or other wildlife, but another interpretive sign told me that many animals called Halfway Brook home. 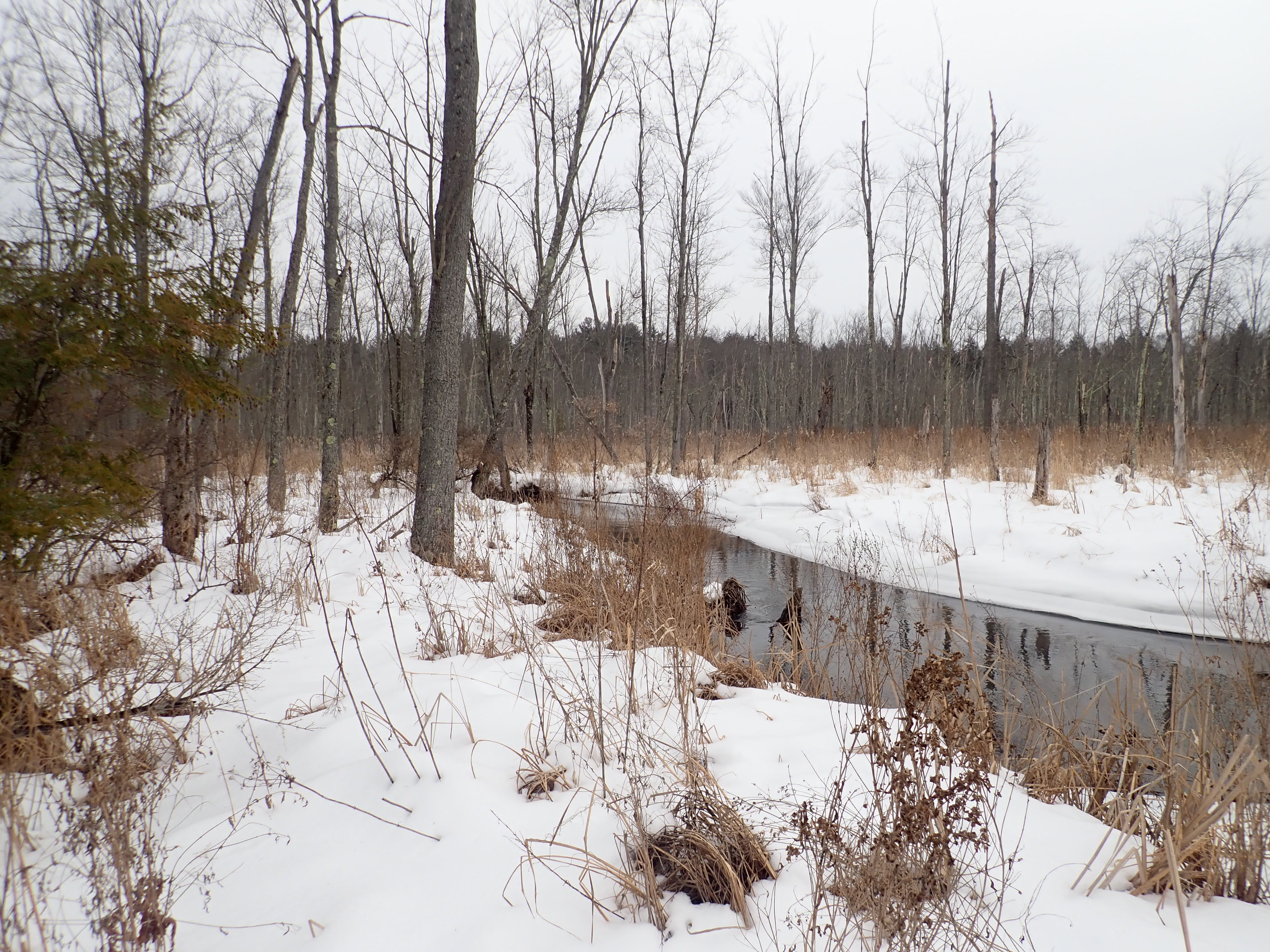 I lingered on the bank of the brook for a few minutes, taking photos and enjoying the scene, before following the herd path a little farther. Eventually, I turned around and walked back to the red trail and found a snow-covered dock on the bank of Halfway Brook. The wildlife was nowhere to be found at the dock, either, but it was another nice spot. 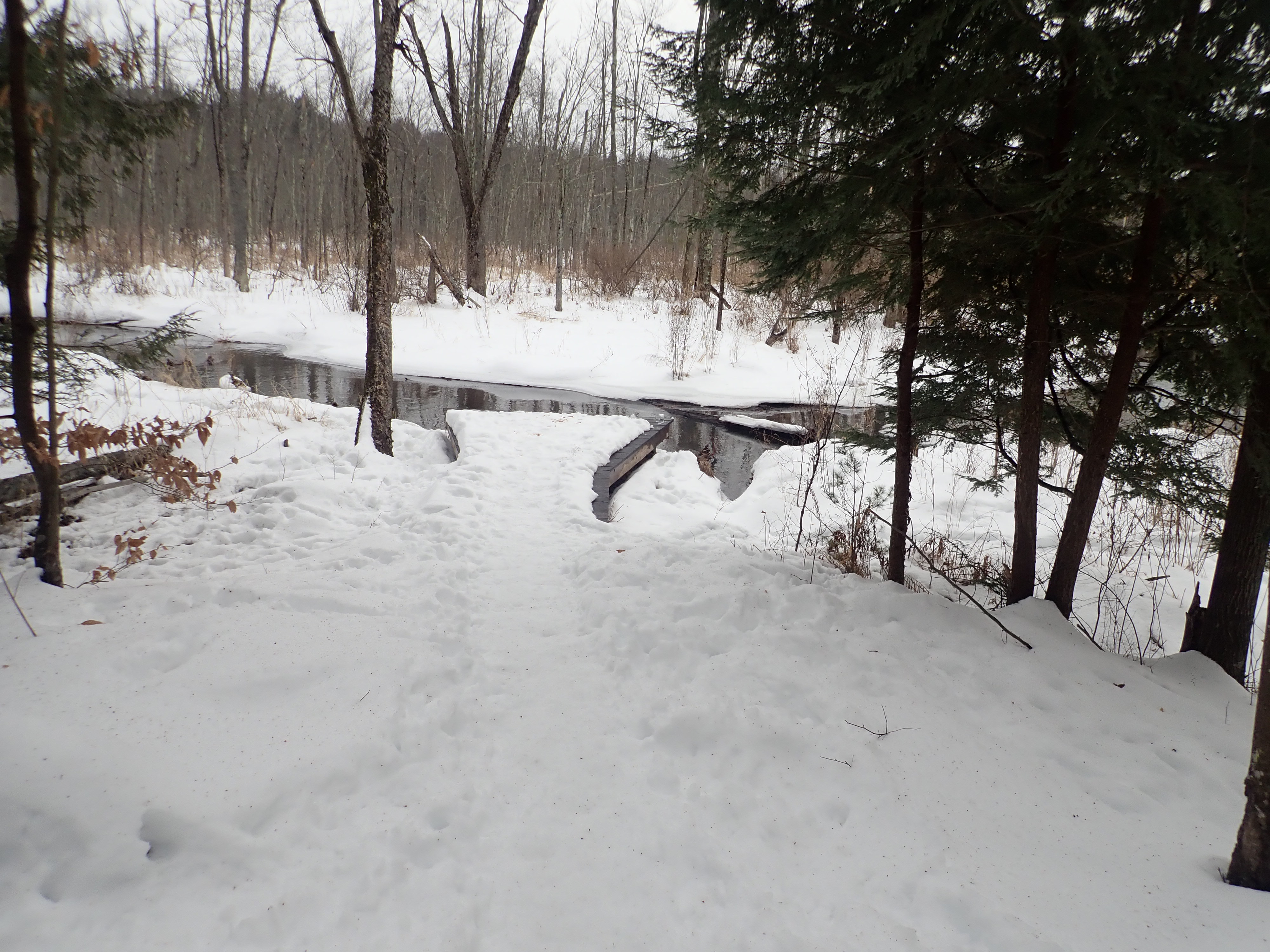 I wasn’t going to get much of a tan on that dock, so back to the red trail I went, meeting up with the orange trail, and then finding the blue trail again. My car was back in sight soon enough. I had completed the loop.

My visit to the Meadowbrook Preserve lasted about two hours, but that’s only because I stopped to take pictures of branches, trees, and boulders in the park. Someone walking their pooch might complete the loop in 30 quick minutes. The preserve is perfect for an easy walk with the dogs or for a quick snowshoe with two-legged friends. If you’re ever just south of the Adirondacks and itching for some fresh air, go take a walk at the Meadowbrook Preserve. 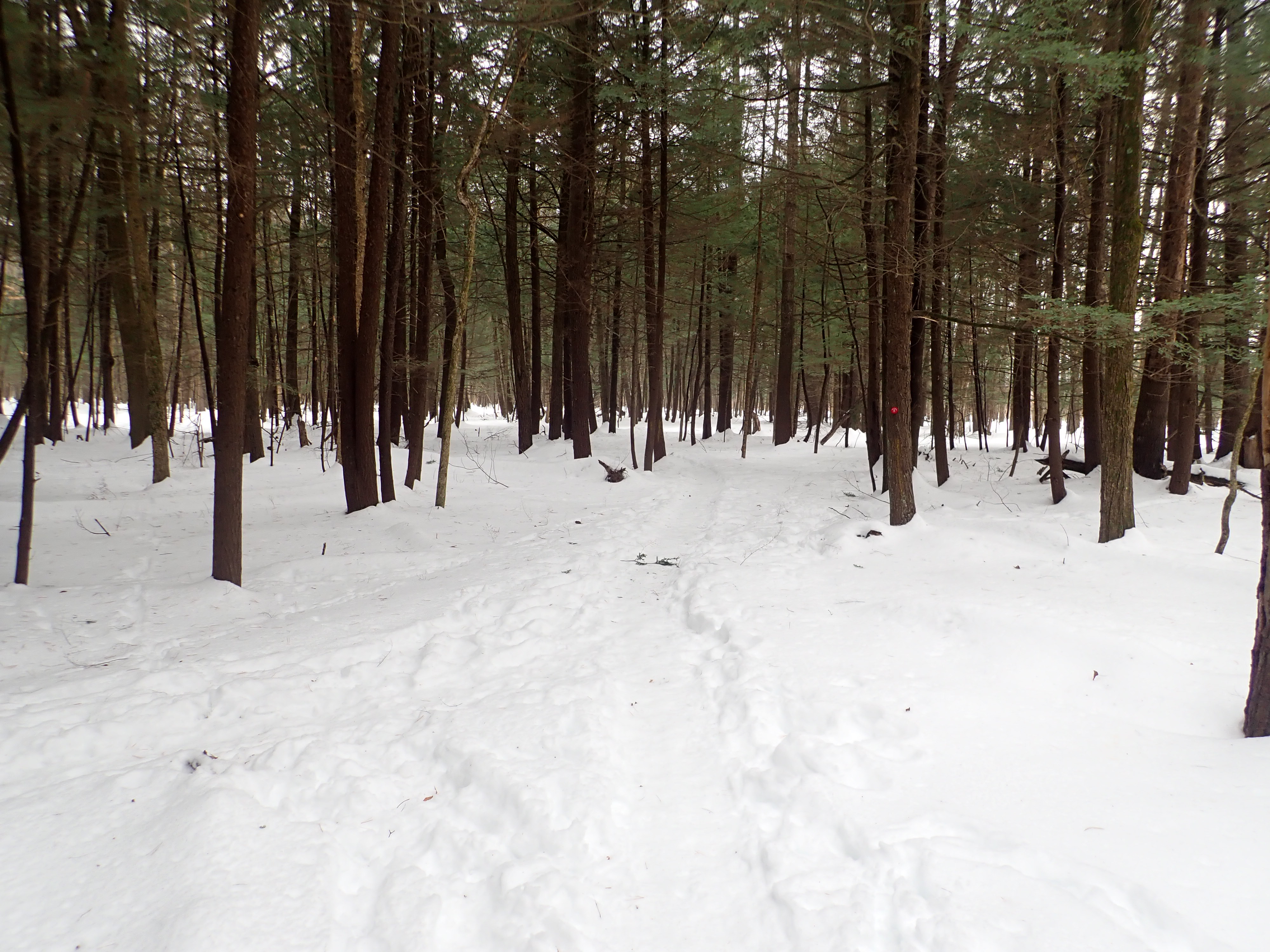