Easy hiking trails in the heart of Chestertown

It’s been a snowy February in the Lake George Area. While we haven’t had any monster storms (so far), a few inches here and there have kept the trails in solid shape for snowshoeing. I decided to give those covered trails a test with a snowshoe in Chestertown on a warm and overcast Friday morning. 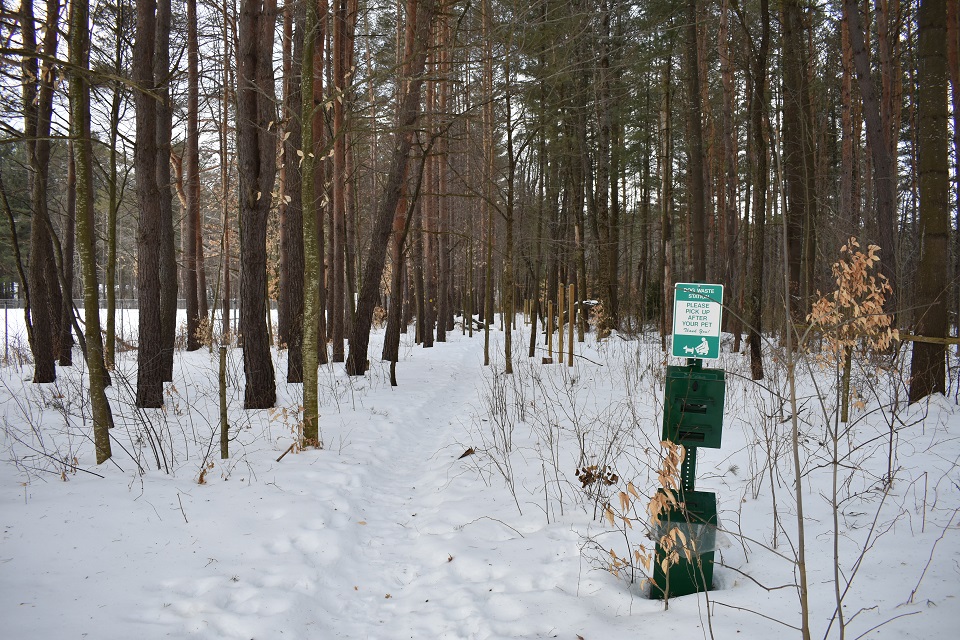 I opted to hike the Chester Creek Hiking Trails, a 1.9-mile mostly flat path that begins behind the Chestertown Municipal Center and follows a meandering Chester Creek. This trail is part of the Chester Challenge, and since I had hiked five of the six trails needed to get my pin, I was eager to explore the trail. 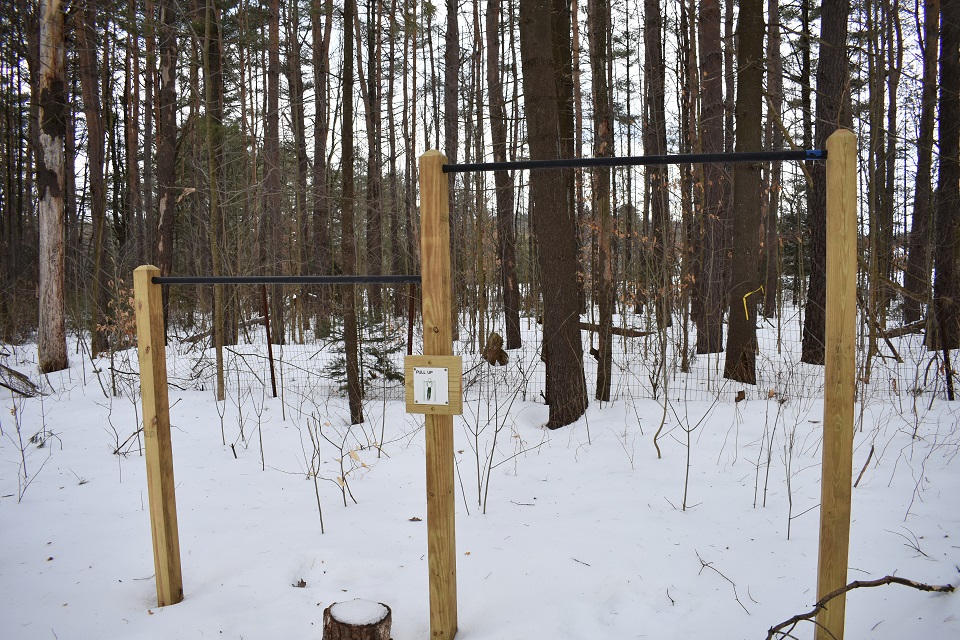 As I walked the narrow, packed trail, I passed about a dozen pieces of exercise equipment. It was all basic and functional, made of wood and PVC pipe. Some of the exercises included pull-ups, push-ups, and dips. The base of snow made a lot of the equipment useless, but those who walk the Chester Creek trails in the warmer months could put in quite the bodyweight workout. It was a cool little feature. 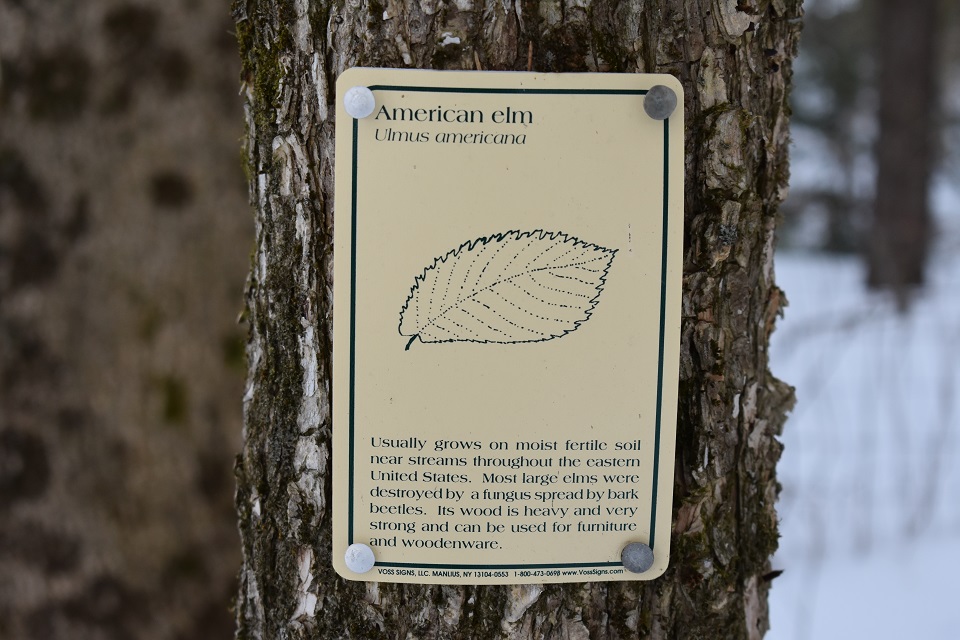 Another great aspect of the Chester Creek trails is the signage naming tree species. I like to hike in the woods, but I don’t know trees, so it’s interesting to walk the trail and read signs identifying the white ash trees and American elms. These neat bonus signs told me two things: that Adirondack forests are incredibly diverse, and that the Chester Creek trails aim to teach about the outdoors. 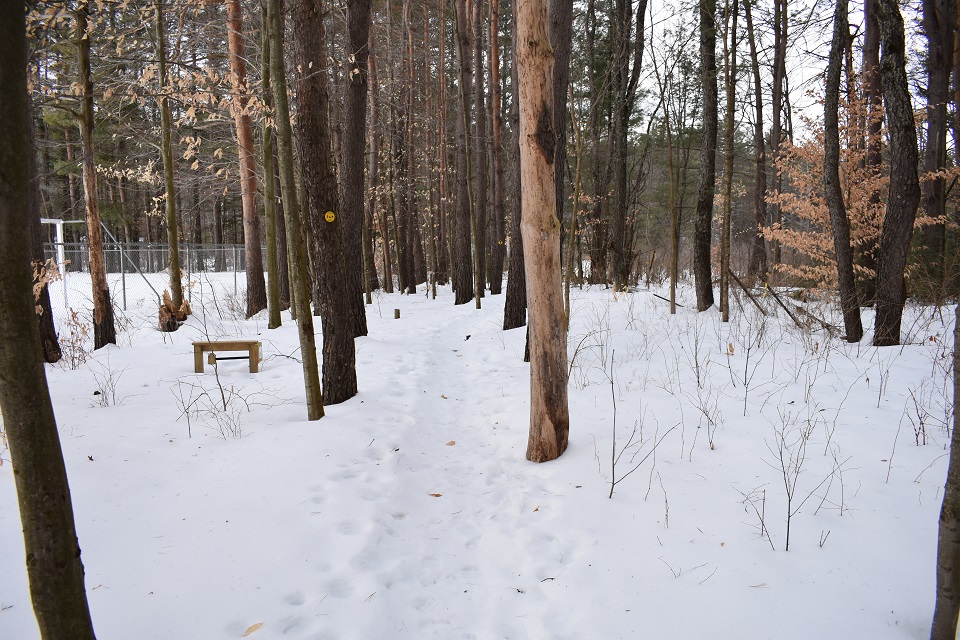 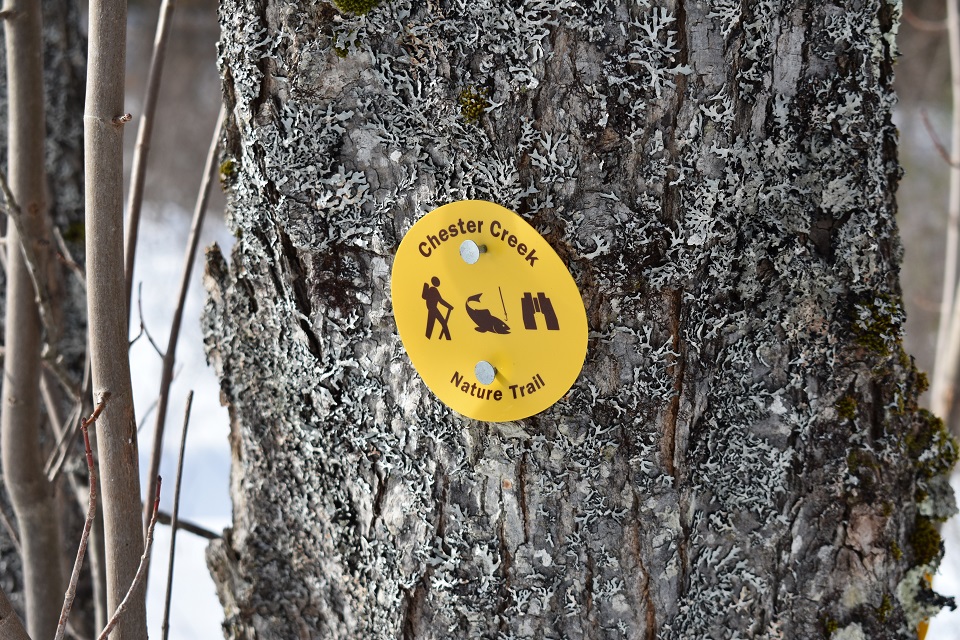 These trails, like all of the Chester Challenge trails, are perfectly marked. Bright yellow arrows and markers let hikers know they’re heading in the right direction. After walking through the first section of woods, I crossed a well-traveled snowmobile trail that followed the outfield fence of a baseball field. The next section of flat trail through the woods brought me to my first view of the creek. 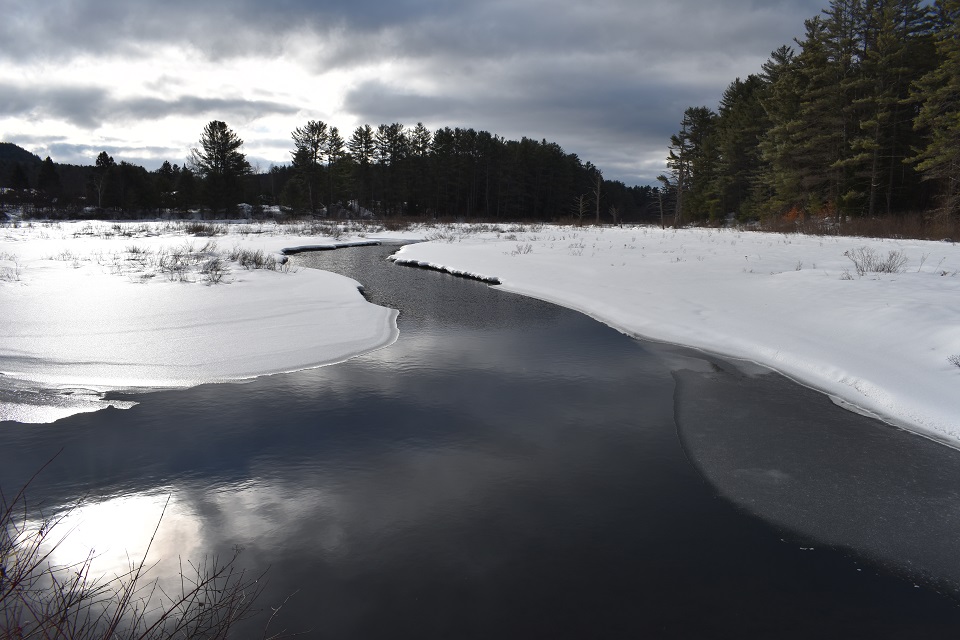 Chester Creek flowed through a frozen and snow-covered meadow on both sides of a wooden bridge. It was barely moving but not frozen solid. The morning sun was attempting to break through the overcast sky, throwing faint light at the translucent ice. Distant hills rose in the background. I crossed the bridge quickly, hoping there were no snowmobiles nearby, and found a trail map waiting for me on the other side. 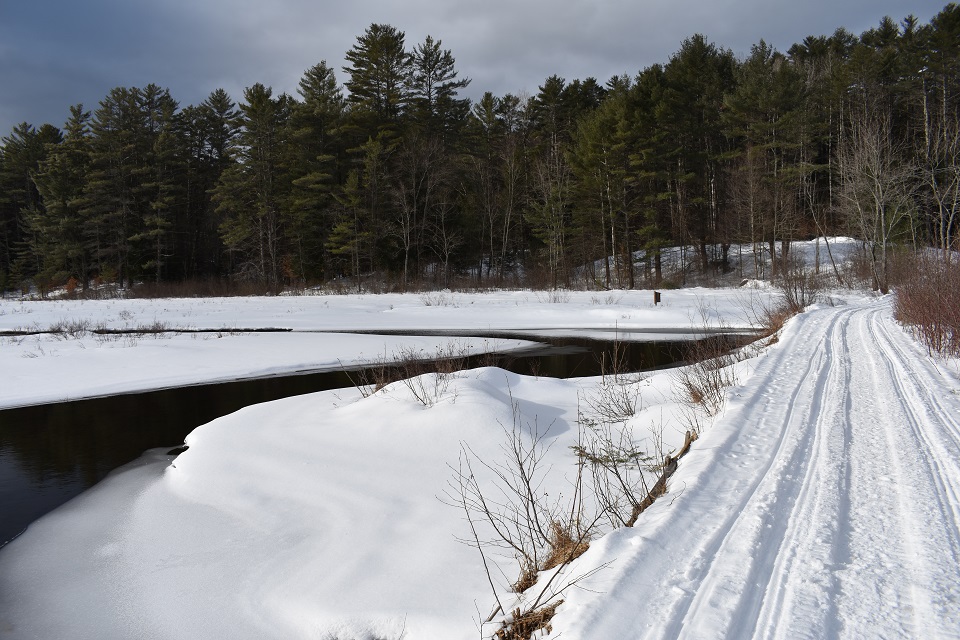 I continued to my left on the yellow trail. The path was consistently up-and-down without a serious, sweat-pouring incline. More trees were identified as the path followed Chester Creek, and several blue benches covered in snow sat in spots that would be gorgeous in the summertime. 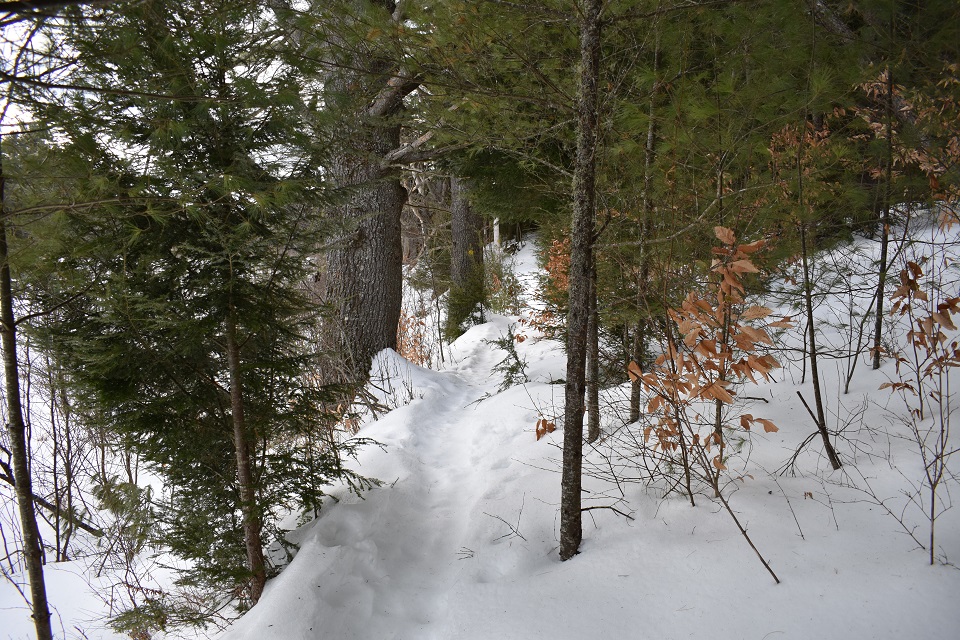 After crossing another wooden bridge, I found a laminated sign that read, “Take a look at what careless fire use can do…” It told the story of an out of control fire that was spotted by a trail steward after the fire-builders ran away. In the summer, it’s probably quite clear what the fire did to the spot, but the late February snow kept all of the damage hidden. Deeper in the woods was a makeshift shelter made of cut wood and nails, and a few more educational signs. Not ready for a nap, I passed the shelter by and kept going. 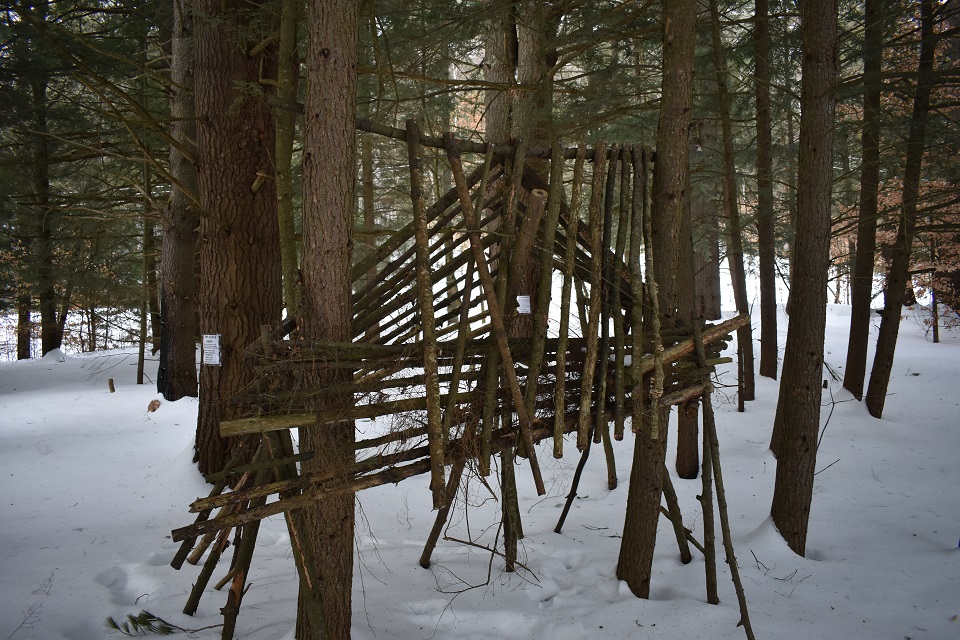 At the end of this portion of the trail, I met more beat down snowmobile trails underneath a strip of power lines. The snow here was soft, and I was leaving deep post-holes as I walked. I should have been wearing snowshoes, but I didn’t think I would need them! Distant yellow arrows assured me I was heading in the right direction, and eventually I was back at the original wooden bridge that passes over Chester Creek. 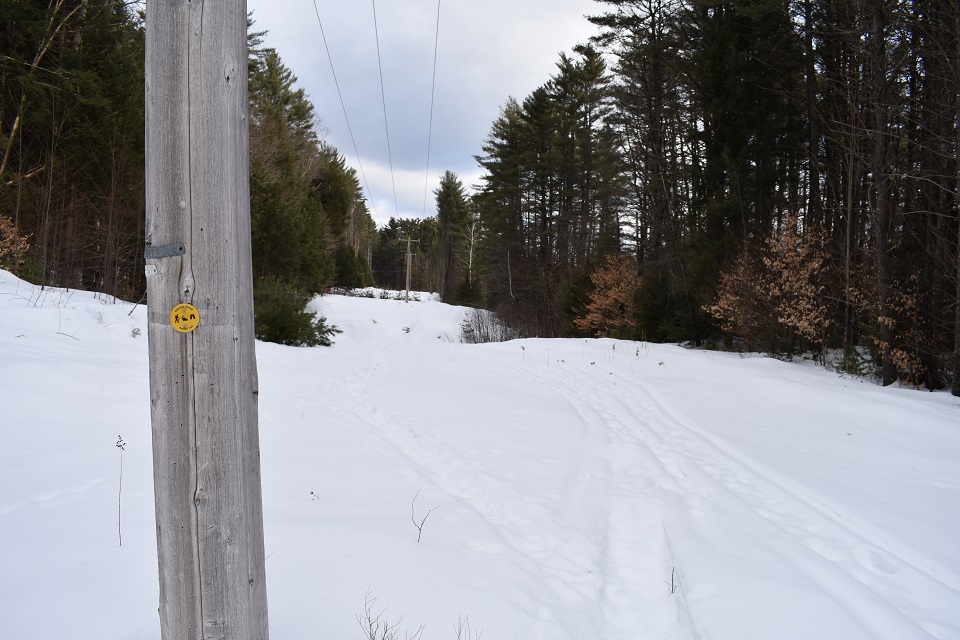 I completed another short loop on the opposite side of the bridge, which offered more of the same views of Chester Creek and one more wooden bench to sit on. After returning to the bridge for a second time I started walking back toward the parking lot. 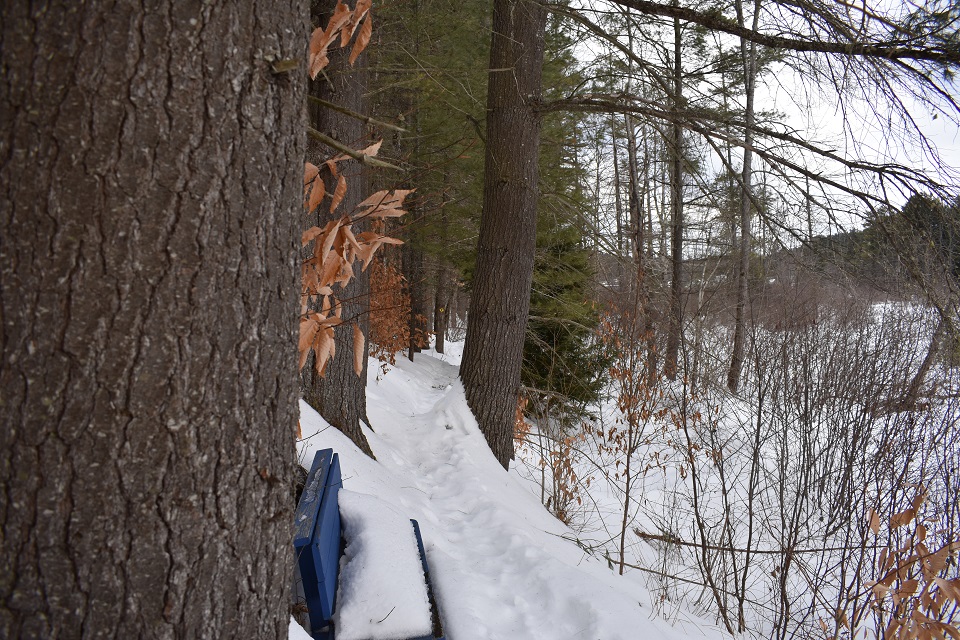 The Chester Creek trails are short and easy. Hikers and snowshoers with kids will love this trail, especially the workout stations in the beginning and the makeshift shelter in the middle of the hike. Those looking for more of a challenge should try Kipp Mountain or Meade & Beckman Mountains, just a short drive away. 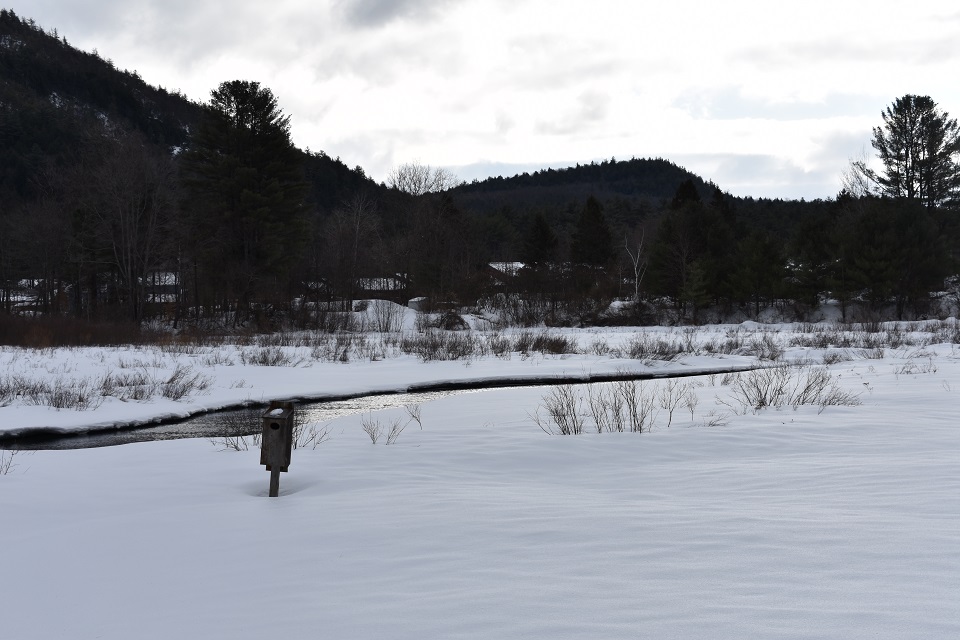