Downtown Glens Falls is the epicenter of another ECHL hockey season

Glens Falls and ice hockey go together like a stick and a hockey puck. Hard-hitting and high-quality hockey has been played and watched in the Glens Falls Civic Center for decades. The ECHL’s Adirondack Thunder play in the newly renamed Cool Insuring Arena. Mesmerizing puck handling, screaming slap shots, last second glove saves, bone-crunching hits, and even a brawl or two on the ice keep the Thunder in every game they play. Through good times and bad, locals and visitors alike know that a family-friendly and exhilarating night out can be found in downtown Glens Falls.

Glens Falls hockey has a rich history that began in 1979 when the the beloved Adirondack Red Wings graced the ice. They were a phenomenal team, winning four playoff titles over the course of their 20 year history. Since the Red Wings left for Rossford, Ohio in 1999, three more teams (sporting five different names) have called the Glens Falls Civic Center (and now Cool Insuring Arena) home ice.

The Adirondack Thunder arrived in Glens Falls prior to the 2015-2016 ECHL season, relocating from Stockton, California. They finished their inaugural season at 38-28, getting bounced from the ECHL playoffs in the second round. The 2016-2017 season held more success for the Thunder, but another early playoff loss kept them from a championship win. The 2017-2018 version of the Thunder, now an affiliate of the NHL’s New Jersey Devils, has high hopes for their first ECHL title.

The Adirondack Thunder play their home games in Cool Insuring Arena, a 4,774 seat multi-purpose arena in downtown Glens Falls. It sits amid the busy restaurant and shop section of the growing city. On nights when the Thunder are playing at home, downtown Glens Falls is buzzing with fans grabbing pregame meals at local restaurants or sipping on cold craft beers at one of three Glens Falls breweries.

On a rainy Tuesday evening, I gather a group of hockey nuts and drove to Cool Insuring Arena to catch some Adirondack Thunder action. The Thunder were hosting the Greenville Swamp Rabbits, an aptly named team around Halloween. However, downtown Glens Falls was far from scary. The sidewalks were crowded with Thunder fans scampering out of the rain and into the welcoming doors of Cool Insuring Arena.

We parked across the street from the arena and wandered across Glen Street to the box office. One of the great things about attending hockey games or other events at Cool Insuring Arena is the plentiful parking, both in paid lots and for free on the streets. We walked inside the arena just as the National Anthem began and stopped for a moment to listen. After the rendition was finished, we were greeted by the arena’s smiling staff, who took our tickets. If you're interested in Thunder merchandise, a shop selling red and white Thunder t-shirts and jerseys is on the right after you enter the arena.

Our seats were in section F, about halfway up. Section F is at the west side of the rink, right behind the goaltender and protected by thin, black netting. The Thunder goalie would guard that net for the first and third periods. I was worried about watching the game through the netting, but after a while, I barely noticed it was there. It doesn't affect how you watch the action, and the added safety the netting provides is worth it.

We found our seats and sat down just in time for the puck to drop. The ice was bright, white and clean, freshly worked on by the Zamboni crew. The new, HD scoreboard hanging high above the middle of the ice began to tick down from 20:00. The game was on.

The crowd at Cool Insuring Arena was sparse but lively. The constant drizzle on a work and school night was probably keeping fans away. The plus side to this is that tickets were easy to come by, and if you wanted to sit somewhere other than your ticketed section, there were plenty of open seats to choose from. Weekend games, especially as fall turns into winter, will be busier. The people that were there were completely devoted to the action on the ice. They cheered for the Thunder at every opportunity, and hollered at the Swamp Rabbits and the referees when they deserved it. Thunder jerseys were common around the building. The locals come out for their team.

Unfortunately for the Thunder, they were playing from behind from the beginning. The Swamp Rabbits scored 55 seconds into the first period, moseying through two Thunder defenders to flick a goal past the Thunder goalie. Not the start we were hoping for.

And the early deficit only grew. The Thunder were attempting to kill the power play and let another goal through. The Swamp Rabbits were lighter on their skates, playing quicker and with more urgency than the Thunder. With that, it was time for a beer. I walked up the concrete stairs to the top of section F and found a beer stand right in front of me.

One of the best parts about hockey at Cool Insuring Arena is that you don’t miss any of the game while you’re waiting in line for food or drinks. Concessions are in each corner of the arena. The rink is rarely out of view. Food offerings are exactly what you would expect, including burgers, French fries, hot dogs, pizza, pretzels, and more.

I returned with beers a few minutes later, hoping the Thunder would pull it together. If they didn’t, the beer would at least brighten my mood. Cool Insuring Arena has a solid beer selection. They offer the typical domestics and imports that you can order at any bar. There is also a craft beer stand that had local favorite Adirondack Pub & Brewery beer on tap. Highly recommended!

The Thunder have a lot of fun with their fans between periods. During the first 20 minute intermission, two young fans got to shoot pucks at the goal from the blue line, with the first fan to score a goal winning a prize. It took a while, but one of the kids eventually scored.

The Thunder finally put one in the net in the middle of the second period on a power play goal. There were a lot of whistles, and the ensuing penalties seemed to help the Thunder. They were hammering the Swamp Rabbit goaltender with shots on goal during their power plays. After letting in another Swamp Rabbit goal, the Thunder scored twice, momentarily notching the score at 3-3. Greenville snuck another goal through to end the second period at 4-3. The Thunder were losing, but so far the game had been an exciting, back-and-forth affair with plenty of hits. The crowd was loud and energetic, giddy for the third period to start.

There was even more crowd interaction between the second and third periods. The Thunder’s mascot, Gunnar, who is apparently the son of Thor, God of Thunder, was waltzing around the stands in a red jersey and mustard-yellow pants, firing t-shirts into the cheering crowd. For the on-ice entertainment, two fans threw bean bags into shopping carts in some difficult to follow, cornhole-esque game. Following that was a dance contest, with anyone willing to show off their moves getting highlighted on the scoreboard's giant screen. Remember, the cameras may be on you at any point.

The third period began with some hope for a Thunder win. They had fought back and were only down by one. Two more Swamp Rabbit goals quickly stomped on that hope. The first goal was a sweet breakaway that a Swamp Rabbit forward flipped past the goaltender. The second Swamp Rabbit goal of the period was a wide open rebound goal. 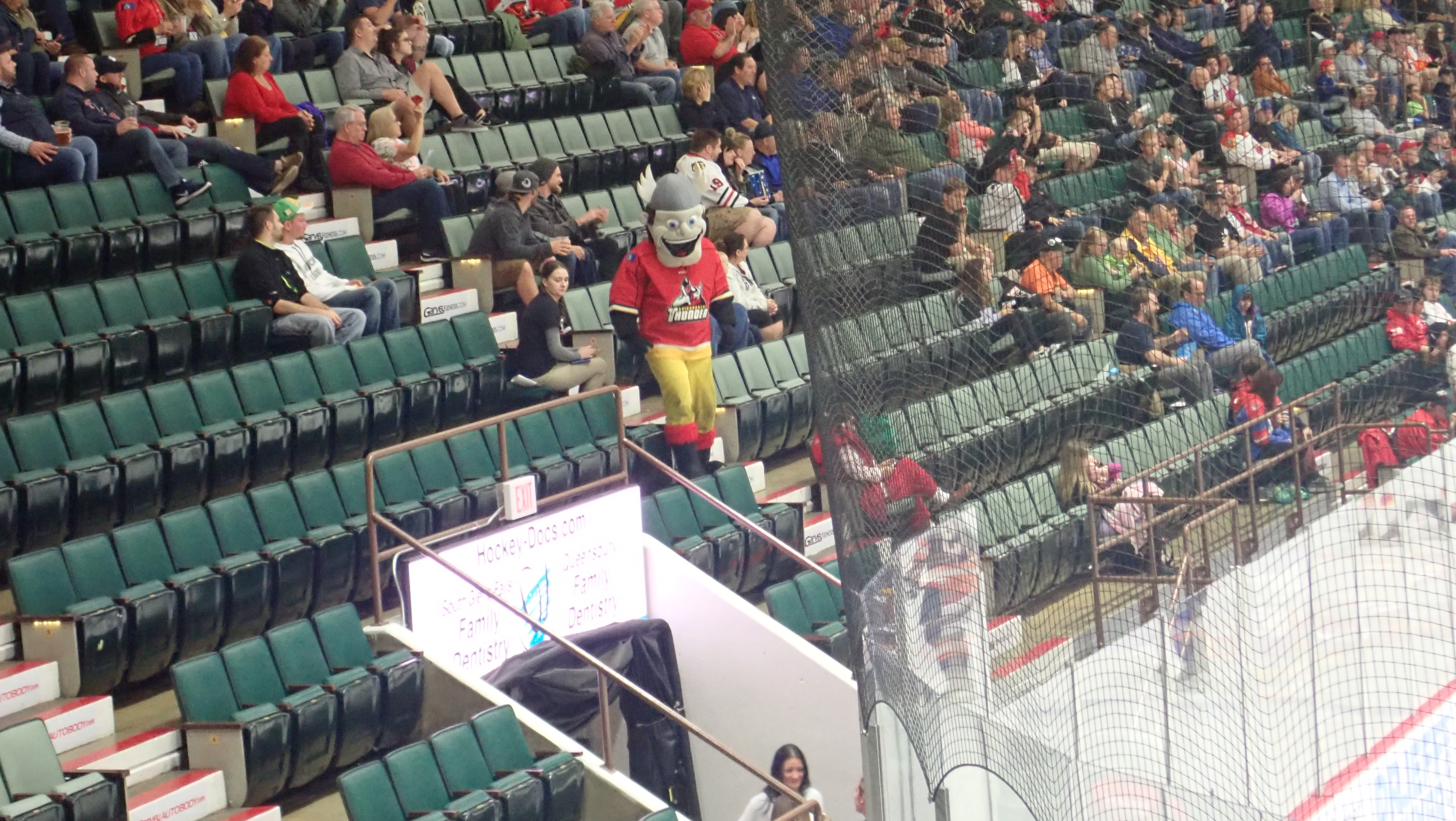 With a deficit of 6-3, many Thunder fans began streaming towards the exits, looking for some other way to spend the rest of their Tuesday evening. We stayed until the end, and saw a final Thunder goal with about a minute and a half left in the game. We cheered with the rest of the dwindling crowd, but the goal didn’t inspire much confidence in a win.

Overall, the Thunder game was an awesome night out. People who are already hockey fans will appreciate the quality of play and the potential of seeing a future NHL star up-close and personal. Those who aren’t yet into the game will be treated to a spirited crowd and tasty food and beverages. The hockey is more than worth the affordable ticket price. Next time you're looking for something to do in the Lake George Area, go watch the Adirondack Thunder.

Visit our website to find the Adirondack Thunder's next home game!