The Lake George Area serves up some of the finest hard-water fishing to be found in all of New York, if not the entire Northeast. Waters big and small are home to a variety of fish species that await ice anglers. Several area lakes and ponds allow ice fishing including a handful of trout waters. They also have viable public access.

A typical Lake George winter finds some of the smaller waters in the region buttoning up by late December or early January. The same can be said of the bigger waters in the northern part of the county. When Mother Nature cooperates, cold, windless nights literally become an ice-making machine.

When this happens, ice shanties start to dot the area lakes and continue to do so until early March, when longer days and more intense sunlight begin to take their toll. No two seasons are alike and therefore opportunistic anglers, with a nod towards safety, make the most of the action from ice-in until ice-out.

Ice fishing is one of the best winter activities in Lake George.

Thanks to Thomas Jefferson, Lake George is known as “The Queen of American Lakes,” but to ice anglers it is simply referred to as “The King.” That’s because Lake George has so much to offer, not to mention pure scenic beauty. 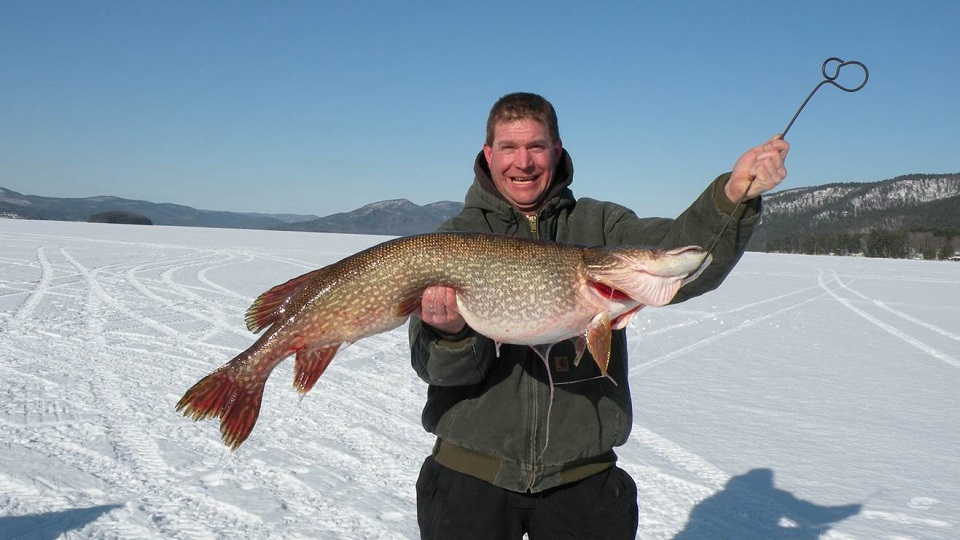 Lake George normally ices over in stages, with the shallow bays being the first to freeze up. Perch anglers are often the earliest to flock to these bays and enjoy season-long action here. They’ll return day-after-day filling their buckets with their 50-perch limit.

The deep, cold waters that make Lake George a two-tiered fishery make it a natural home to a native lake trout population.The King has always been a trophy lake trout fishery where a 23-inch creel limit is in place. An aggressive stocking program for landlocked Atlantic salmon has resulted in an improved take, but salmon fishing remains challenging. 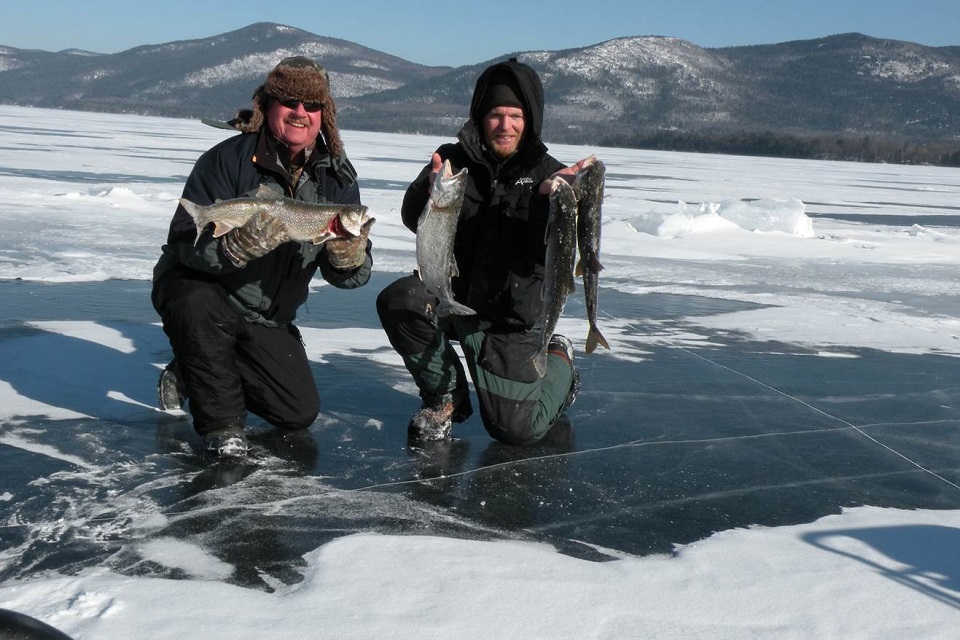 There are also trophy-size northern pike in Lake George, which often take a back seat to the panfish and salmonid fishing. Rainbow smelt too are now legal to target as well as use for bait.

Lake George remains a prime destination for anglers because of a variety of access points. There are New York State boat launches at Hague Town Beach Park and Million Dollar Beach in the Village of Lake George along with municipal access points elsewhere, including one in Bolton Landing at Veterans Memorial Park. Hearthstone Point Campground, just north of Lake George Village, is also a popular access location.

Like Lake George, but not as large, Schroon Lake is also a multi-species fishery with plenty of public access. The southern end of the lake sits in the Lake George Area where anglers get on the ice at both Eagle Point Campground and in the hamlet of Adirondack, NY on the east shore.

Once they do they can spend the day over deep water fishing for both lake trout and salmon, or hit the bays for perch, northern pike and panfish. Schroon Lake’s lake trout regulation allows for an 18-inch creel size and 15-inches for salmon.

Another fairly large body of water in the Lake George Area is Brant Lake. Anglers access Brant Lake via a New York State public boat launch off Route 8 on the western end of the lake.

An excellent perch and black crappie fishery, Brant Lake draws light-tackle anglers who enjoy a long season similar to nearby Schroon Lake. Brant Lake also features a solid trout stocking program of both brown and rainbow trout species and therefore remains attractive to anglers willing to rise to that challenge. 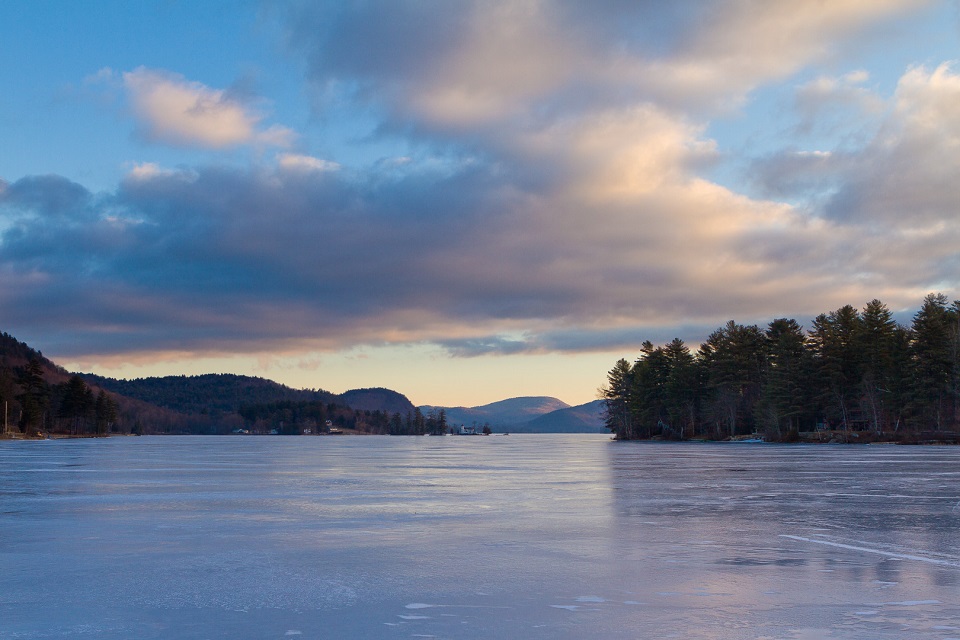 Just south of Lake George sits Glen Lake, where the only public access is the Town of Queensbury’s municipal (non-motorized) launch on Glen Lake Road. While there are fewer perch to be found in Glen Lake, those that are iced tend to be large. The same can be said for the panfish, which are a challenge on this lake during the winter.

Each year in late January an ice fishing tournament is held that is headquartered at the Docksider Restaurant next to the boat launch where several trophy-sized pickerel are landed. But the real gem in Glen Lake during the winter are the rainbow trout, which are stocked both by New York State and the Warren County Fish Hatchery. Some real beauties have been weighed in at the tournament or caught by individual anglers. 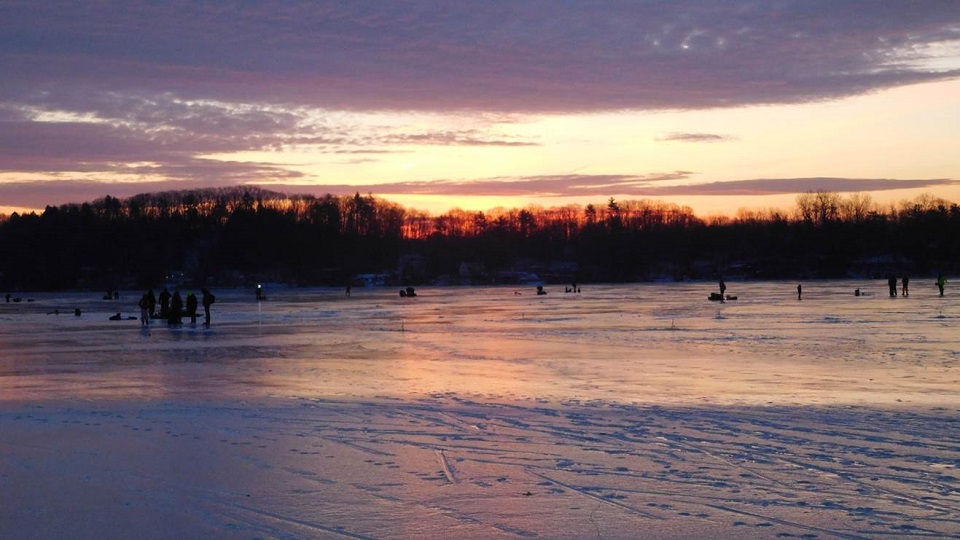 Another lake that serves as a year-round trout fishery and therefore beckons ice anglers, is Lake Luzerne. A New York State public boat launch in town serves as the main access location. Both brown and rainbow trout are routinely stocked here and are thus the main attraction. There is also solid perch and panfish action to be had at Lake Luzerne where one of the highlights of the winter is a special youth fishing tournament.

Anglers looking for ice fishing action in the southeastern Adirondacks simply need to watch the thermometer and have their gear ready. Lake George Area waters await! 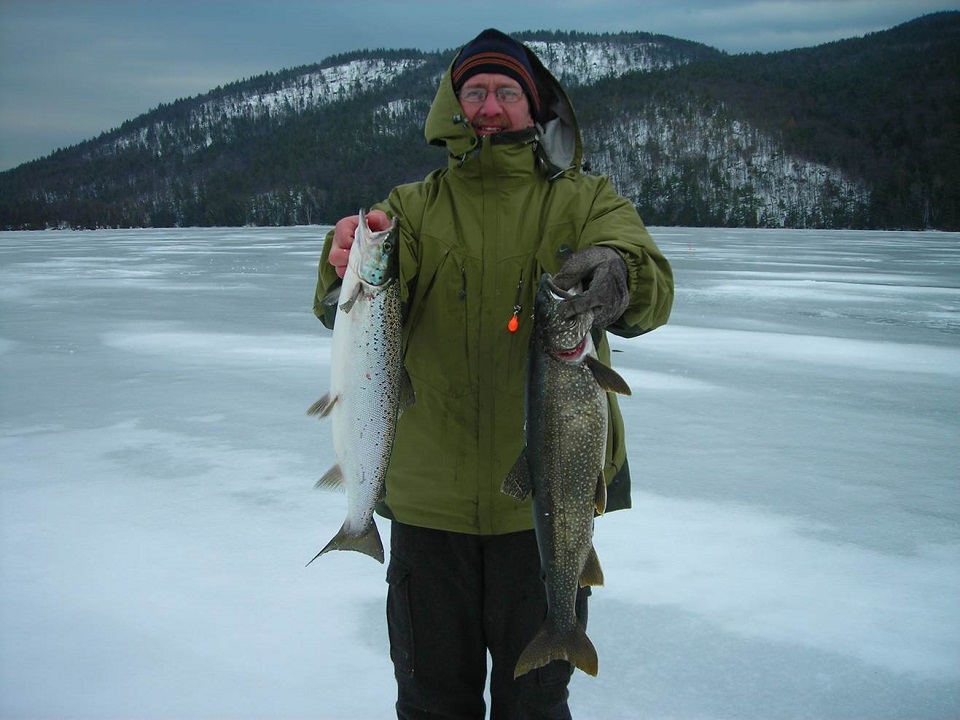 Ice fishing in the Lake George Area is one of the great Adirondack pastimes.

Pull up a stool at one of these frozen bars before it's too late.