My girlfriend and I rolled south on Route 9N through Lake George Village at around 8:30 a.m., just as the normally bustling strip was beginning to wake up. The streets were crawling with visiting families heading to breakfast and Lake George Area locals walking their dogs. We were headed for a walk of our own at the Schumann Preserve at Pilot Knob.

The Lake George Land Conservancy, a not-for-profit that aims to protect Lake George, bought the 223-acre preserve in August of 2000. It was originally named the Pilot Knob Ridge Preserve, but was renamed to the Schumann Preserve at Pilot Knob after past executive director Lynn LaMontagne Schumann passed away from breast cancer.

We turned left onto Beach Road, passed Million Dollar Beach, and then hung a left onto Route 9L. About seven miles later, after passing Dunham’s Bay Resort, we took another left onto Pilot Knob Road. Less than a mile later, on the edge of the Lake George Area, the Schumann Preserve at Pilot Knob is on the right. If you cross into Washington County you’ve gone too far.

In May of 2017, the Lake George Land Conservancy constructed an expanded parking lot at the base of the preserve. The old lot was small, forcing hikers to attempt to jam their cars into tight spots, park on a busy Pilot Knob Road, or find somewhere else to hike. The new lot is a huge upgrade over the old one. There are now two levels of parking with room for about 20 cars. The crushed stone lots are enclosed by light brown post and rail fencing. A park bench stationed on one corner of the lot is a great place to retie your hiking boot and double check your gear.

After locking my car and admiring the new parking lot one more time, we signed into the trail register. Great news: only one group had signed in so far. Pilot Knob is a quick hike, kid-friendly, and located ten minutes outside Lake George Village. It can be a busy trail. Only one sign-in meant we might have some trail time alone. We hit the trail at 9:05 a.m. with our fingers crossed.

The orange trail climbs for about one mile from the trailhead to the gazebo at the top. A quarter of a mile beyond the parking lot the trail splits, with one section heading south and the other continuing east. Orange Lake George Land Conservancy trail markers are almost always in view. It’s a well-traveled dirt trail that swells to 10 feet wide in spots. Large rocks are scattered throughout the trail, popping out of the earth like goose bumps and forcing you to constantly watch where you’re walking.

It was a sunny morning with temperatures nearing 70 degrees, but we both noted that the forest surrounding the trail was thick and dark. We noticed distinct rays of sun blasting through the leaves. It was even a kind of chilly in the heavily shaded sections.

That momentary chill disappeared as soon as we started sweating. The trail begins as an easy jaunt through the woods but quickly gets steeper and more intense. We passed a section covered in intermingling tree roots which seemed to throttle the boulders buried in the ground. Even some tree trunks seemed to be exposed above where they should be, showing how roots quickly expand as they dive into the earth.

We picked up an empty Budweiser can and an empty chip bag on the trail. Again, this is a busy preserve hiked by dozens of families and oodles of kids. We saw probably twenty people during our two hours on the property. I assume the garbage was dropped by accident, or by kids who don’t understand how important it is to keep trails clean. Please remember that when you’re hiking it is up to you to clean up after yourself. Throw your trash in a back pack or in your pocket. Bring an empty plastic grocery bag with you so you can pick up trash on the trail. We want the Adirondacks to stay clean!

The trail continues east. According to the Lake George Land Conservancy website, there’s a spot where the orange trail breaks off to the south, leading hikers on a more meandering path to the gazebo. We didn’t notice this break on our way up.

Sometimes it’s hard to find a clear trail to follow. You always know where you’re going, but between the fields of boulders and sprawling roots, you’re not pushed to follow a specific path. If you’re ready for a rest there are plenty of boulders to take a seat on.

We made it to the gazebo at 9:30 a.m. – a 25 minute hike with one short rest. Benches arc around the gazebo's edges. There’s room for a dozen people to relax, rehydrate, and get out of the sun. It’s covered in signatures, messages, and phone numbers left by hikers, but I’d recommend not defacing it any more than it already is.

The view of the southern basin of Lake George from the gazebo is gorgeous. You can see the small communities of Assembly Point and Cleverdale, Long Island and Speaker Heck Island, Harris Bay, and the mountains on the west side of Lake George.

We had only hiked Pilot Knob in the winter, so the growth on the fields behind the gazebo was surprising. The trail to the gazebo is almost overrun by the tall grass and weeds. There will be no Frisbee or football played in this jungle anytime soon.

We arrived at the gazebo just behind a trio visiting the Lake George Area from Tom’s River, NJ. We chatted for a few minutes about the region, where to launch a kayak onto Lake George, and my recent visit to the Stone Pony in New Jersey. Pilot Knob was one of the trio's first ever hikes, showing how accessible it is. Two more groups and about ten hikers total arrived at the top during our twenty minutes in the gazebo.

After we finished chatting with our new friends we wandered south of the gazebo towards the blue trail. Following this trail east for about a mile leads to a seasonal waterfall. We strolled for half a mile, discussing breakfast. The weather was warming up and the bugs were beginning to buzz around. After a typical “I don’t know, what do you want to do...” discussion, we turned around and went back to the gazebo. We’ll hit the waterfall next spring when it’s flowing hard. We sat down again, snapped some pictures, and started down the other side of the orange trail. 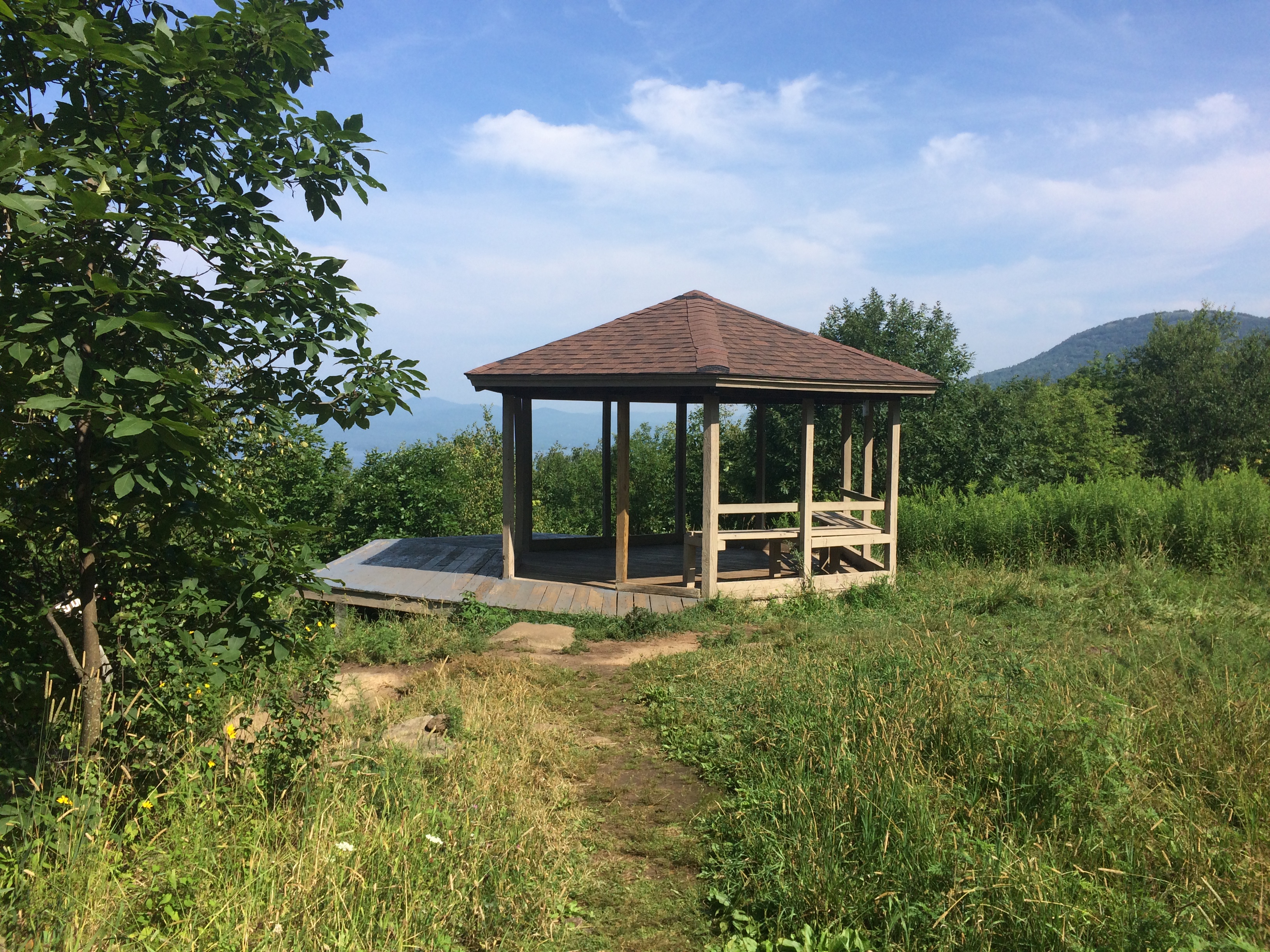 The orange trail wraps around the south side of the gazebo and eventually merges back into one trail. Like usual, we scrambled down the trail quicker than we hiked up. We had to step or hop off some of the boulders mentioned earlier, being careful not to trip. We found a few critters on the way down. After taking this picture, and doing research on its proper name, I eagerly await the nightmares involving this American giant millipede. I much prefer the American toad that seems to hop under my boot every time I hike. 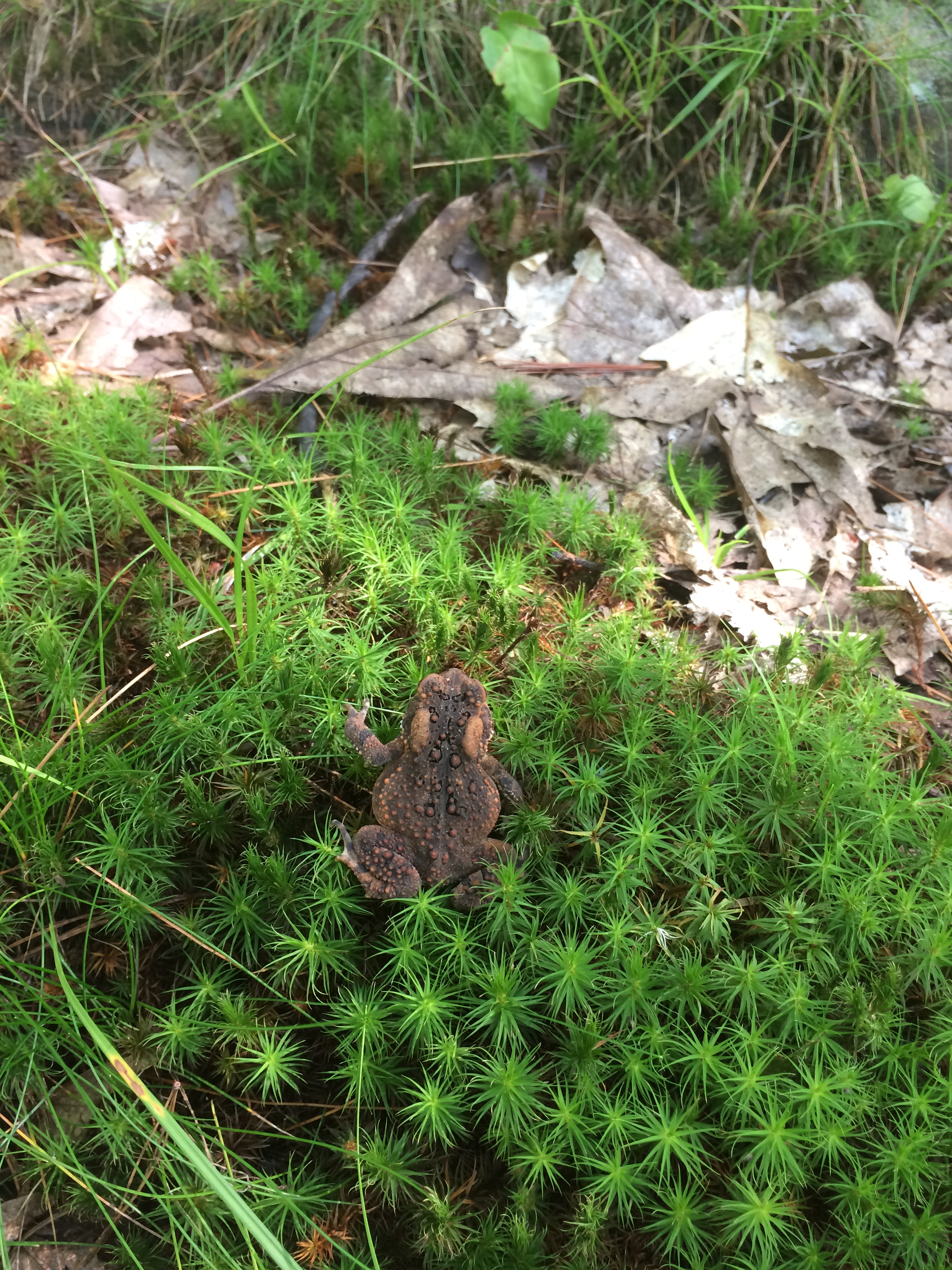 Overall, we’d rate this hike as easy-moderate, but leaning more towards moderate. It doesn’t take long to travel the two miles round trip to the gazebo, but there are a few momentary steep sections. The views are jaw-dropping, the gazebo is unique on a mountain summit, and the convenience to Lake George Village can’t be beat. It’s definitely kid and dog friendly. For those reasons, we recommend the Schumann Preserve at Pilot Knob.