A 2.1-mile round trip trail that brings hikers to two separate summits

Summer is beginning to wane. Fall is coming. You can feel the change when you leave for work in the morning. While the end of summer is sad in some respects, the cooler weather makes for better hiking. On another crisp August morning, my girlfriend and I drove to Chestertown. Our destination was Meade Mountain and Beckman Mountain.

This two-for-one special is a steep, 2.1 mile round trip trail that brings you to two separate peaks from one trail. Meade and Beckman are part of the Chester Challenge, a hiking challenge based in Chestertown. Hikers must visit six of the eight locations to complete the Chester Challenge and receive their pin. Most of the hikes are short and rated as easy or moderate. Some are simple walking trails.

We drove north on the Northway to exit 25. A left off the exit put us on route 8. We drove for a bit, took a right onto White Schoolhouse Road, then a left onto Igerna Road, and we were there. One of my favorite parts of the Chester Challenge trails is their convenience. Most of the trailheads are only a few minutes off the exit.

We pulled into a small dirt parking lot off Igerna Road. There was one car in the lot, which had room for maybe six cars at the most if they’re squeezed in. The trail head and trail register are right there in the parking lot. I signed both of us into the trail and we started to walk.

Initially, the trail looks like an old dirt road. Anyone who has hiked Thomas Mountain in Bolton Landing has seen a trail like this. It’s six to eight feet wide and shaded, with small rocks poking out of the earth. It climbs briefly and then drops back down with no significant incline. The trail wasn’t sopping wet, but it was kind of muddy. Green ferns and grass line both sides of the trail.

Just like the other Chester Challenge trails, it would be hard to get lost on your way up to Meade Mountain. Yellow “Meade/Beckman” trail markers are posted on trees, and yellow arrows point you, literally, in the direction you should be walking. Several run down and leaf covered roads or trails jut off the main trail. Posted signs keep hikers from wandering down the wrong route. Just follow the yellow arrows and markers.

After some up-and-down meandering, the hike actually begins. I wasn’t ready for this one. The trail is steep. I hate to use the phrase, “straight up,” because it definitely wasn’t even close, but in the moment it felt that way. 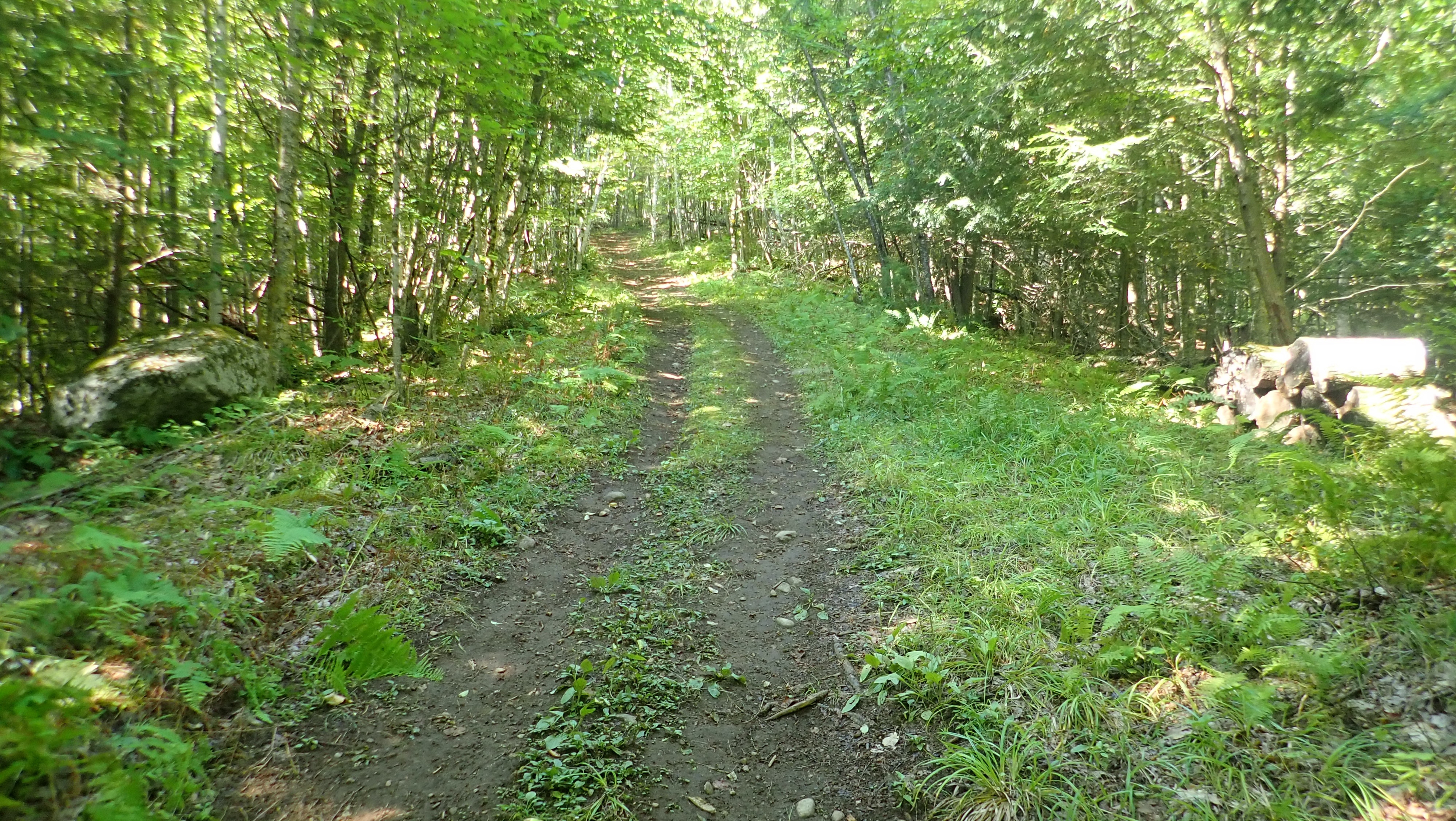 A dog leg right brings a brief respite and a “You Are Here” sign. The sign worked as intended, showing us that we were about halfway through the total hike and almost to the summit of Meade Mountain. Another steep climb was looming. My lungs hurt.

We huffed through the next steep climb. I was puffing more than my girlfriend, who blew by me without a care in the world.  Fine. I was carrying our back pack, which surely explained my deep breathing and pouring sweat. Or, maybe, I’m not in tip-top shape. Who knows?

To the relief of my lungs and I, that was the last steep section of the day. At the end of the incline, another yellow arrow pointed us along a narrow path, ending at the top of Meade Mountain. The summit is a large, wide open, treeless rock face clearing with a park bench for resting and plenty of space to lounge around in the sun. We can see the trio of Gore Mountain, the North Creek Ski Bowl, and Pete Gay to the west. On this August morning, all of the snow on Gore’s trails has melted. To the south and southwest, Crane Mountain, Mount Blue, and a slew of other peaks rise above the trees. It’s a solid view, especially the shot of Gore. A brown and yellow sign reads, “All photo copyrights belong to God! So keep your negatives in order.” 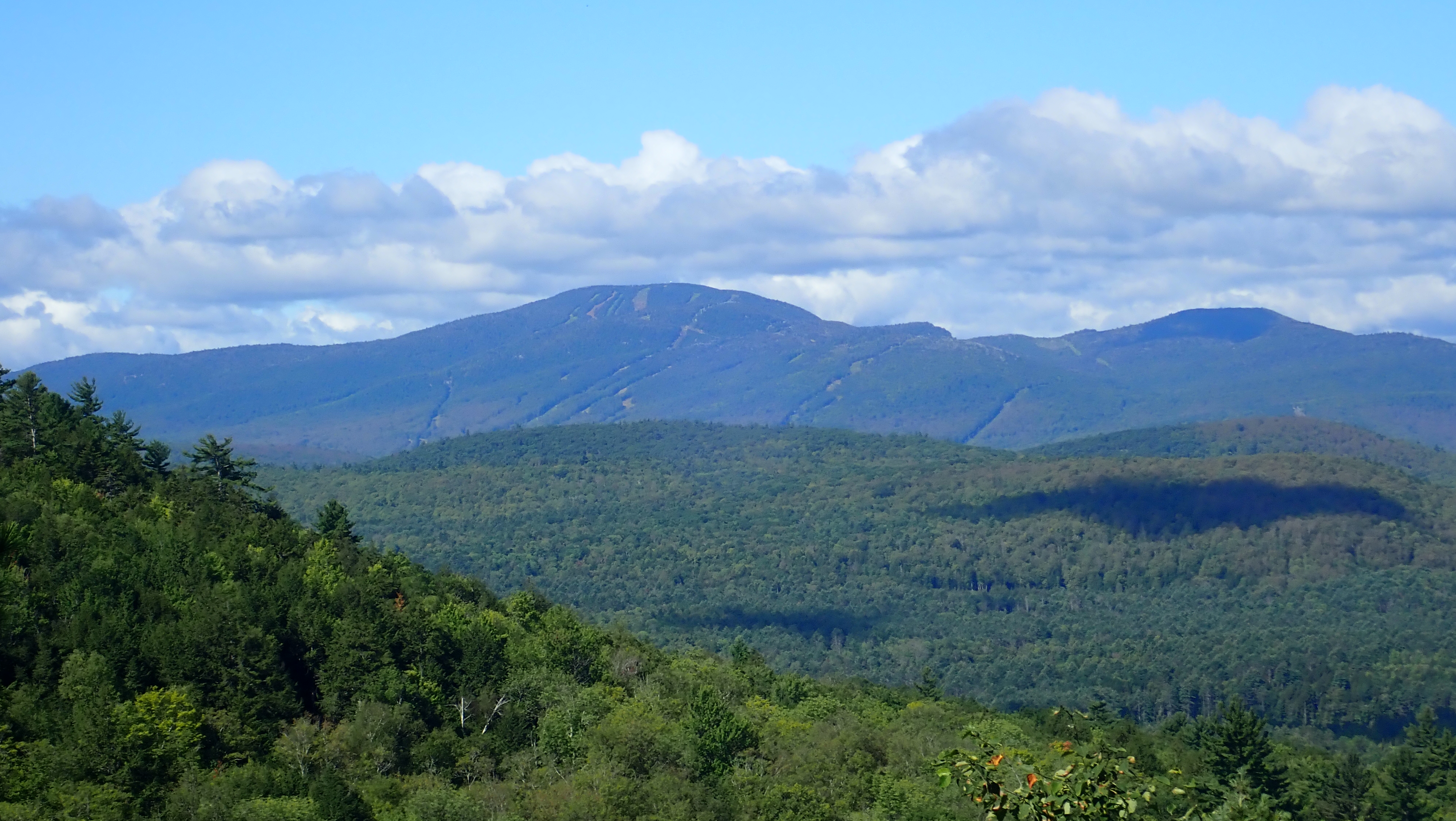 Another “You Are Here” sign tells us where we are. At this point, we’re at a summit of 1,540 feet. This isn’t the end of the hike – we still have Beckman to conquer! After drinks of water and a few deep breaths on the park bench, we followed the narrow path further along the ridgeline. More views emerge between the trees, but none are as good as the initial summit of Meade. Make sure you stay on the trail. There are spot where this ridge line is more of a cliff. The fall would hurt. 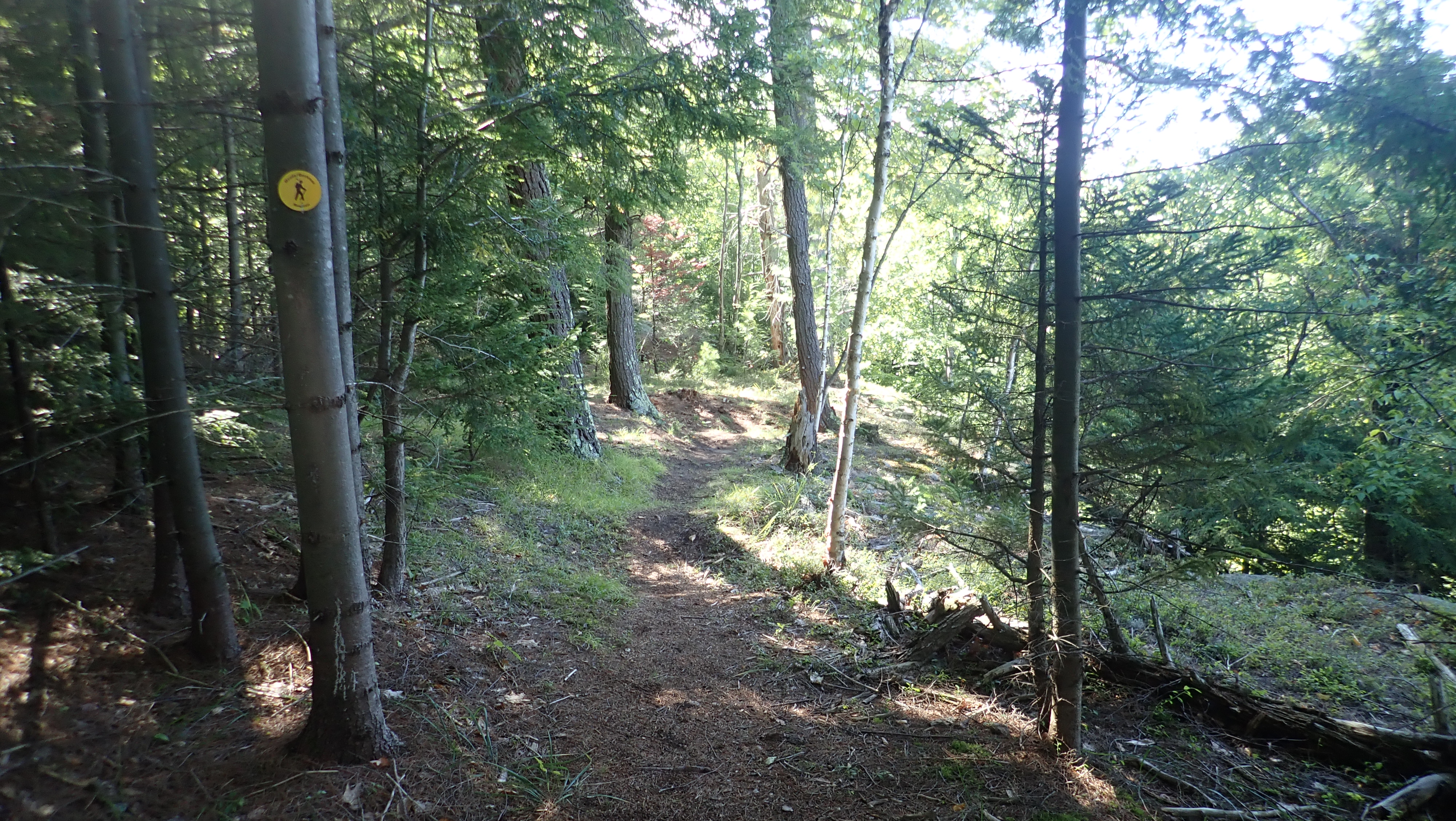 The trail rambles on, ranging back and forth from the wide, dirt road trail to the narrower path through the woods. After another short ascent we arrived at the summit of Beckman Mountain. Loon Lake spreads out below, and Panther Mountain, Prospect Mountain, and Kipp Mountain are visible in the east. We sat on the ground, drinking more water and admiring the view. Boats were already cruising around Loon Lake.

There is a platform in this clearing that is owned by the property owner. It is clearly marked with “Keep Out” signs. Please always respect the wishes of these landowners and stay on the marked trail. 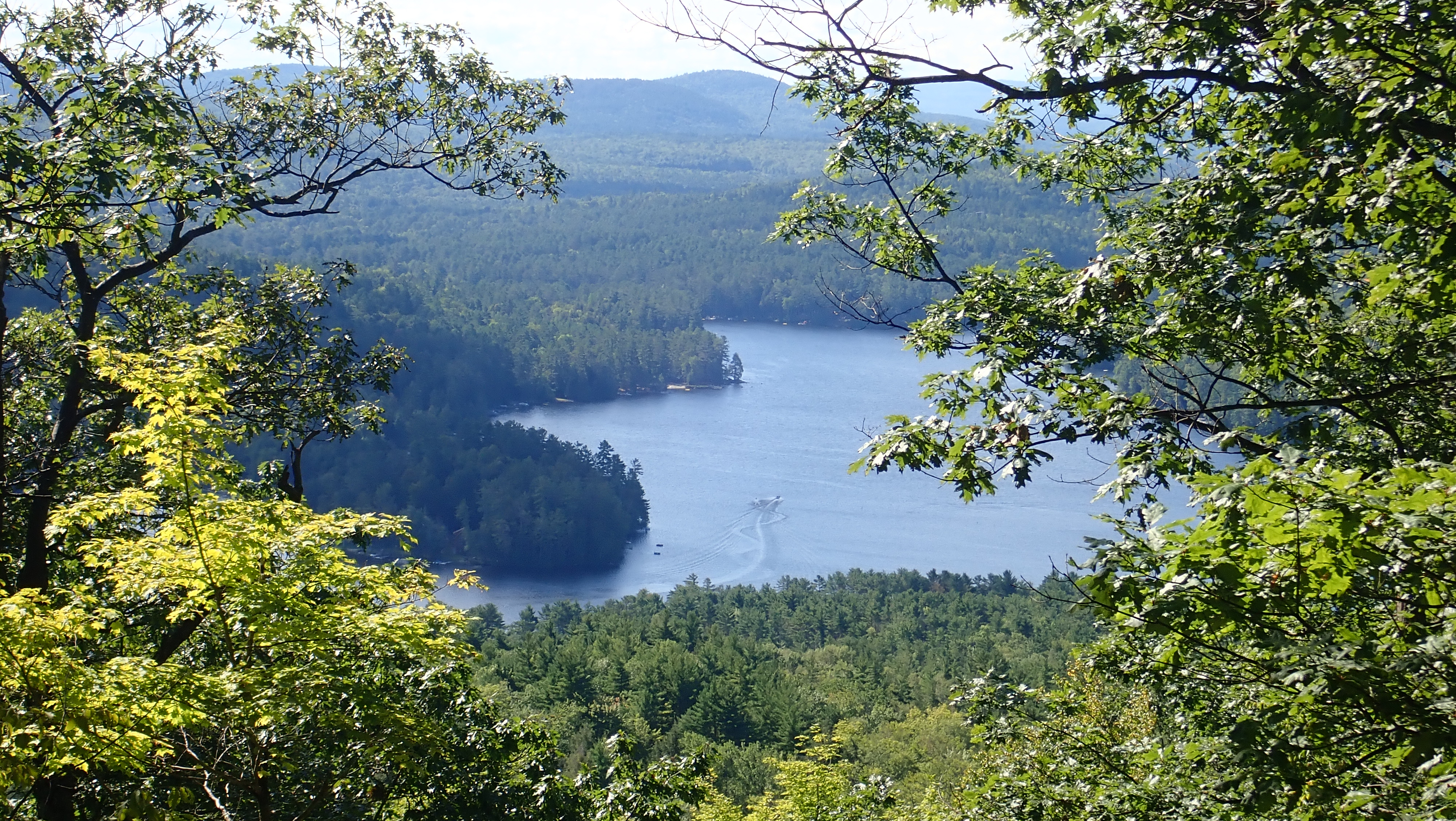 As we sat on the ground, we heard someone coming up behind us. After saying howdy, we found out this man was the landowner. We spoke for a few minutes about the trail and the Chester Challenge. He said that in 2016, there were visits to the trail from countries as far away as Russia. Kind of amazing.

He let us know that his favorite spot to hang out was farther down the trail, so we put our water away and followed the yellow arrows. Fields of ferns lined both sides of the trail and the sun peeked through the trees, warming the morning.

We came to another lookout, with a rock face that sloped into the forest. There was a picnic table placed in the shade. From this spot we could see Schroon Lake below and mountains in the distance. We sat at the picnic table and took in the view. It was chilly in the shade, so we got up and started heading back to the parking lot. 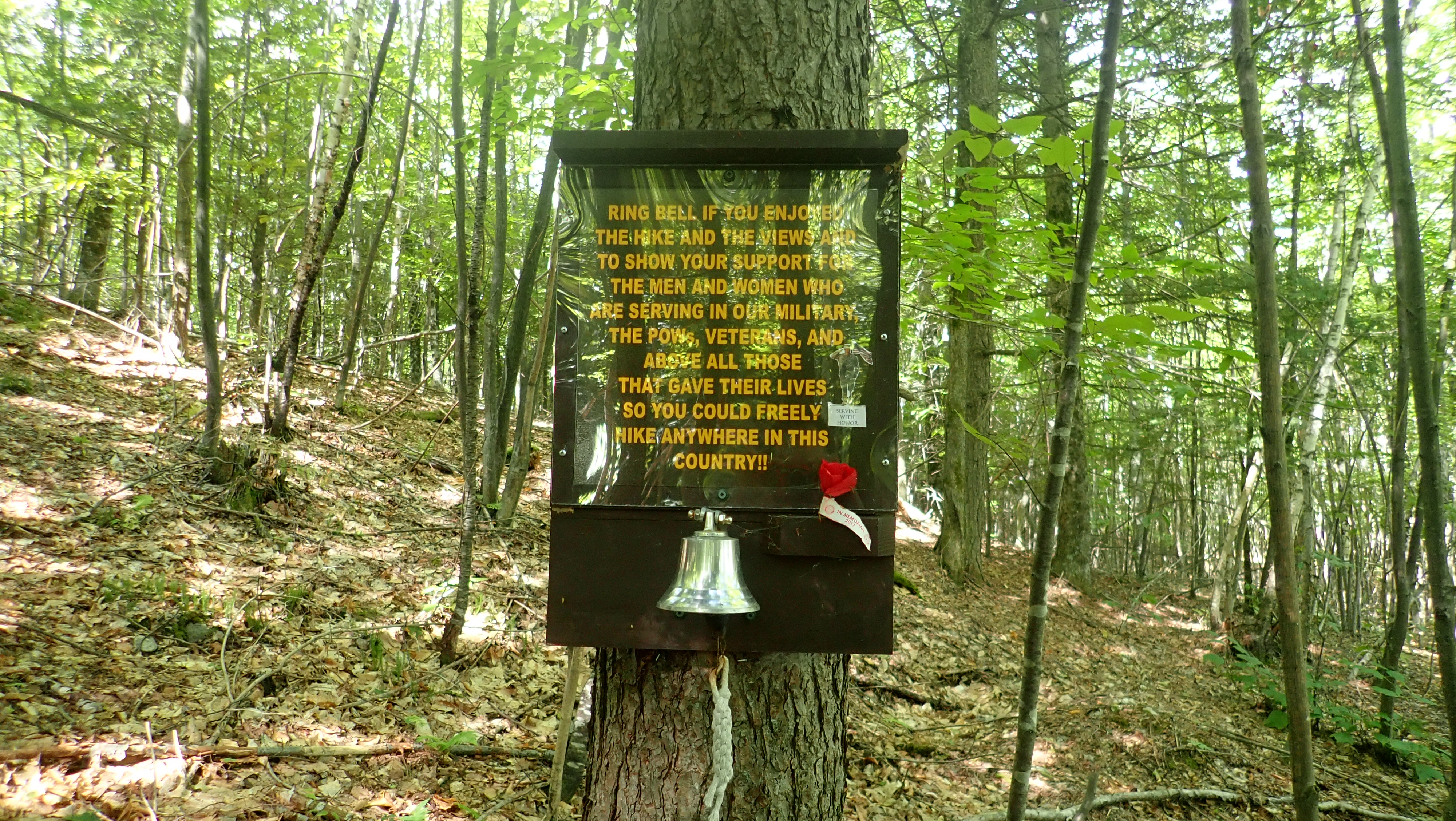 As usual, the hike back to the parking lot was easier than the scramble up to the summits. We walked down the dirt road, following the trail markers through several forks. We came to a bell and a sign that read, “Ring bell if you enjoyed the hike and the views and to show your support for the men and women who are serving in our military, the POWs, veterans, and above all those that gave their lives so you could freely hike anywhere in this country!!”

We also saw a white-tailed deer fawn hiding in the woods. We stared at each other for a minute, neither us nor the fawn moving. I snapped a few pictures before the fawn bounded away deeper into the forest.

Overall, Meade and Beckman rate out as a moderate hike. I thought it was tiring but my girlfriend thought it wasn’t so bad. It’s short, the views are gorgeous, and the trails are well-marked. To me, the Chester Challenge trails offer some of the best hiking in the Lake George Area. Plus, who doesn’t appreciate a twofer?