An easy walk following the Hudson River in Queensbury

The Hudson River, which originates in the Adirondacks from Lake Tear of the Clouds and flows into the Atlantic Ocean, runs through the Lake George Area’s backyard. The mighty Hudson is a recreational centerpiece of the region, with paddlers, rafters, and hikers benefiting from her waters. 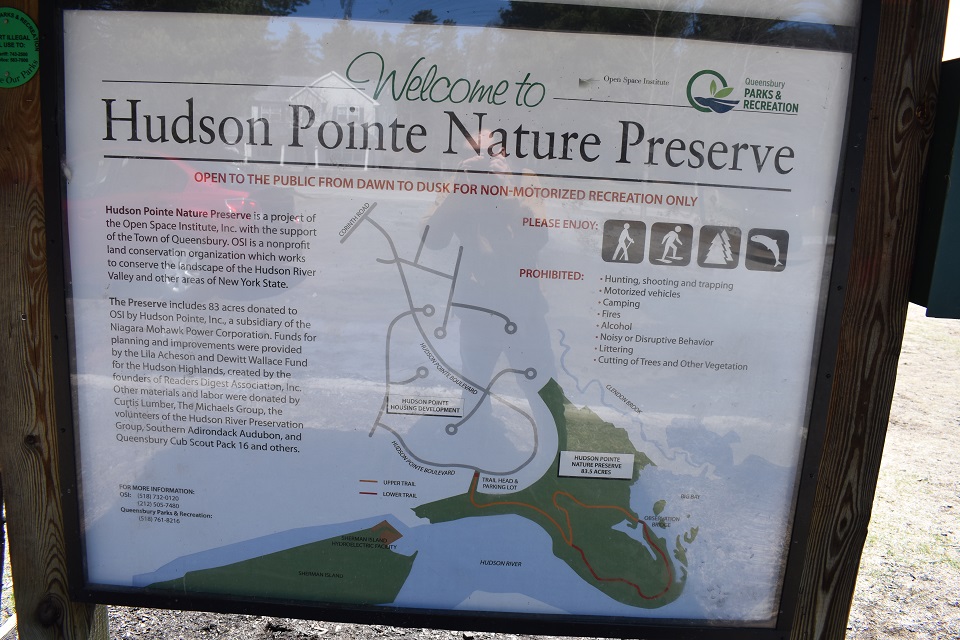 The tract of land is in a residential neighborhood on Hudson Pointe Boulevard. I pulled into the small stone parking lot with room for about 10 cars. A tall sign described the preserve, and a conveniently-placed picnic table sat behind it. I grabbed my camera, and started walking across a long field of short grass toward what looked like the beginning of the trail. 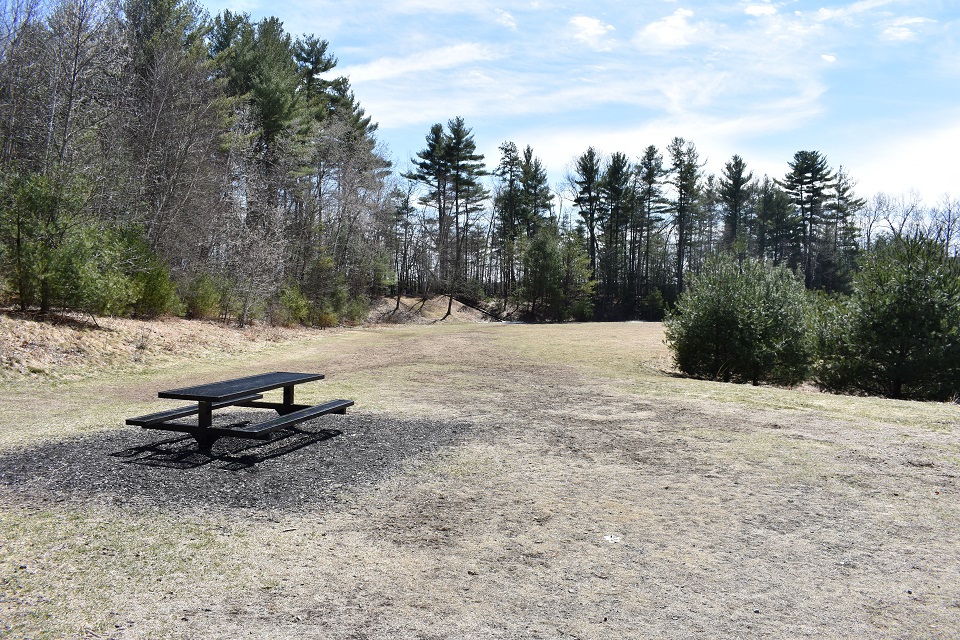 The first trail I hit was the yellow trail, a single-track mountain bike route that winds through the preserve. I was only on that trail for a short time before I came to another Hudson Pointe Preserve sign which was the true beginning of the trail. The sign warned against getting too close to the banks of the river, which fall sharply towards the water. Another sign provided some education about “Plant Life in Queensbury.” On to the orange trail. 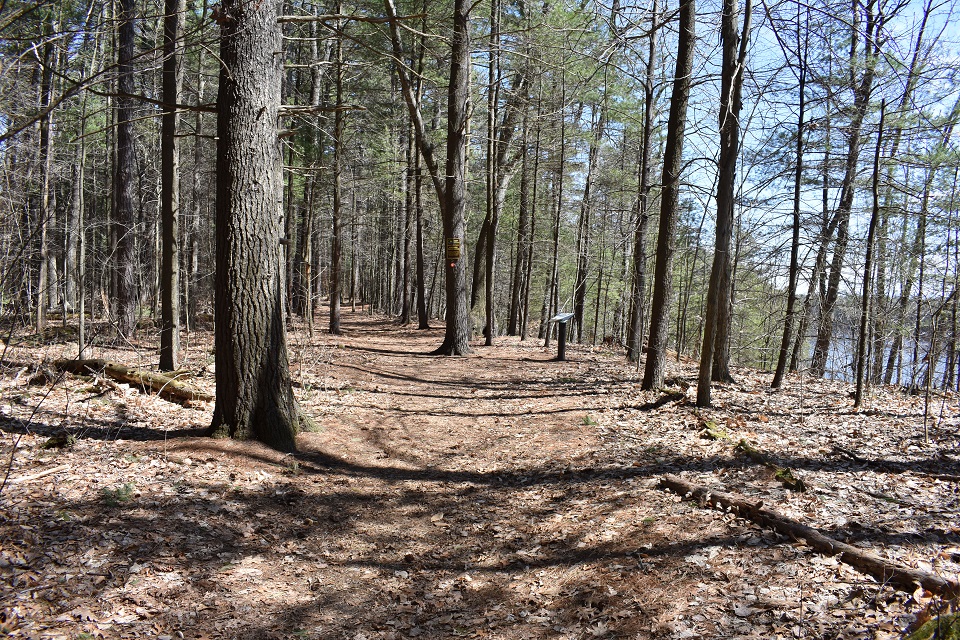 The orange trail, and much of the Hudson Pointe Nature Preserve, consisted of wide, walkable trails with zero elevation. The trail was covered in dead pine needles, creating smells reminiscent of the worn paths on the Lake George camping islands. Trees grew in the middle of the trail. The surrounding forest was thin and uncrowded. Other than the natural up-and-down of a walk in the woods, there is little challenge in this preserve. That doesn’t mean Hudson Pointe isn’t worth your time. 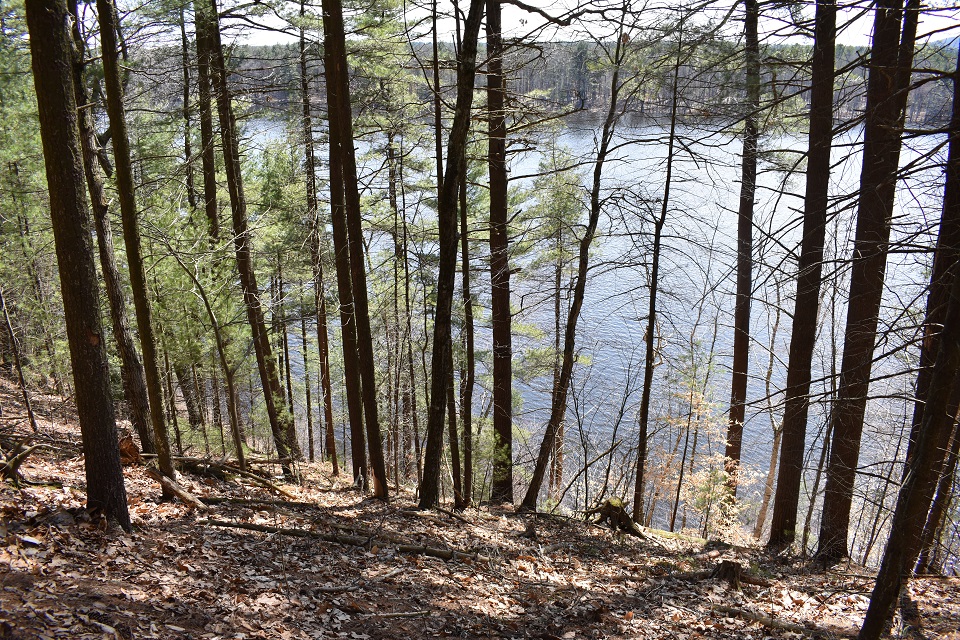 The views of the Hudson were beautiful. I inched as close as possible to the steep drop that led down to the river several times, but I wasn’t able to get close enough to get to the water. In most spots the Hudson was still obscured with growing pines.

I continued walking with the Hudson River on my right. The sloping bank was still too steep to risk climbing down to the river. That changed once I merged onto the green trail. Before long, I came to a gate in a black fence. The leaf-covered trail sloped down, and after hopping over the last patch of ice in the Lake George Area, I finally found myself on the same level as the Hudson. 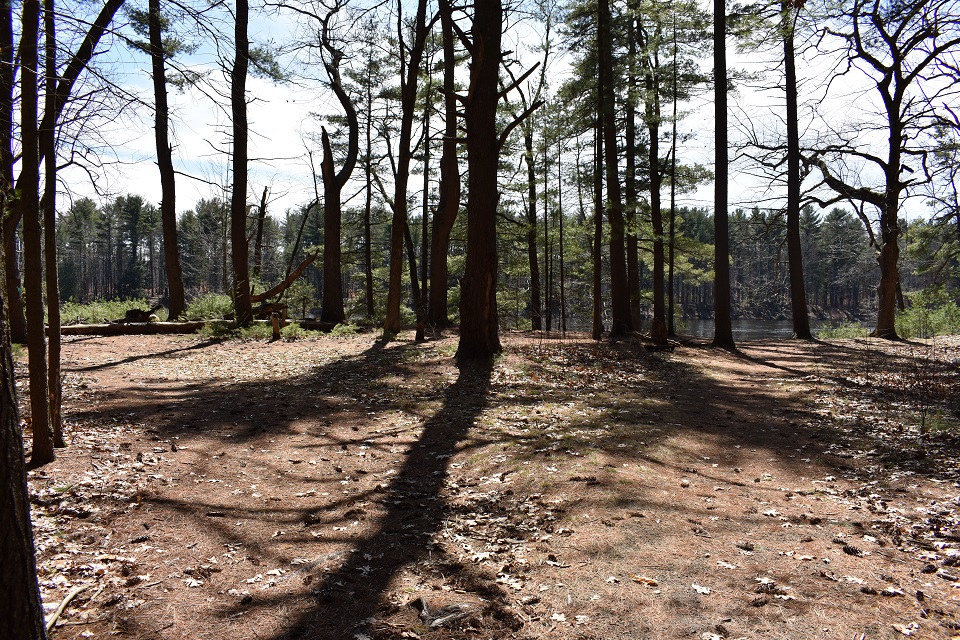 I skipped the blue “short cut” trail and kept strolling the green trail until it opened into a spacious, flat area that would be perfect for lunch in the sun. Even better, I was able to creep directly onto the banks of the river and dip my fingers into the water. It was absolutely frigid. There were the remains of an old campfire on the bank, which is not allowed. Towering trees provided thin slivers of shade. 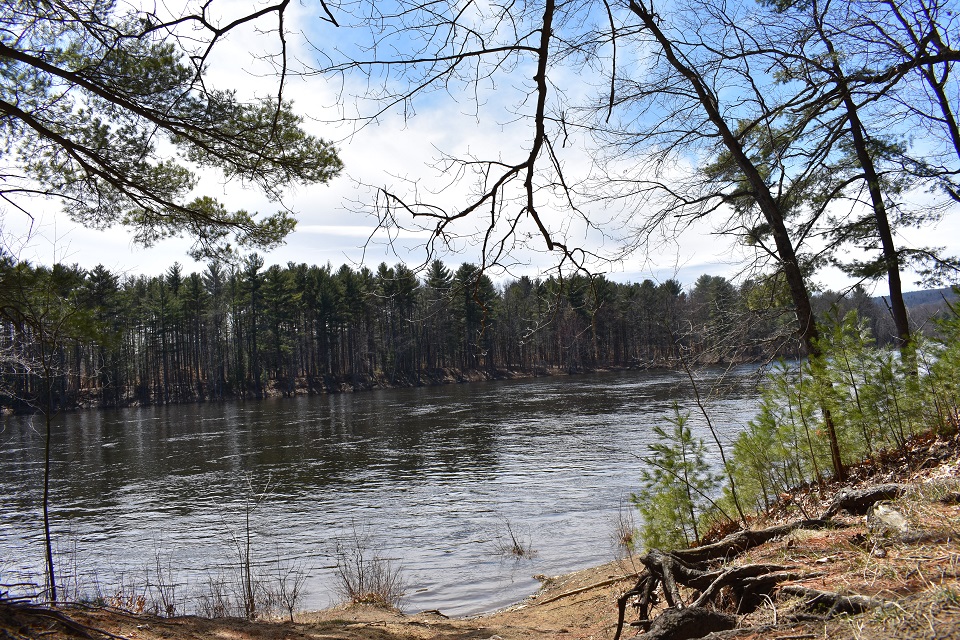 The Hudson River was cold and placid, running high with snowmelt as it flowed towards Glens Falls. The sun was doing its best to warm the water. Every couple of yards there was another unique spot on the bank of the river. I don’t know if there’s good fishing at this point in the Hudson, but there were plenty of good locations to make a cast. 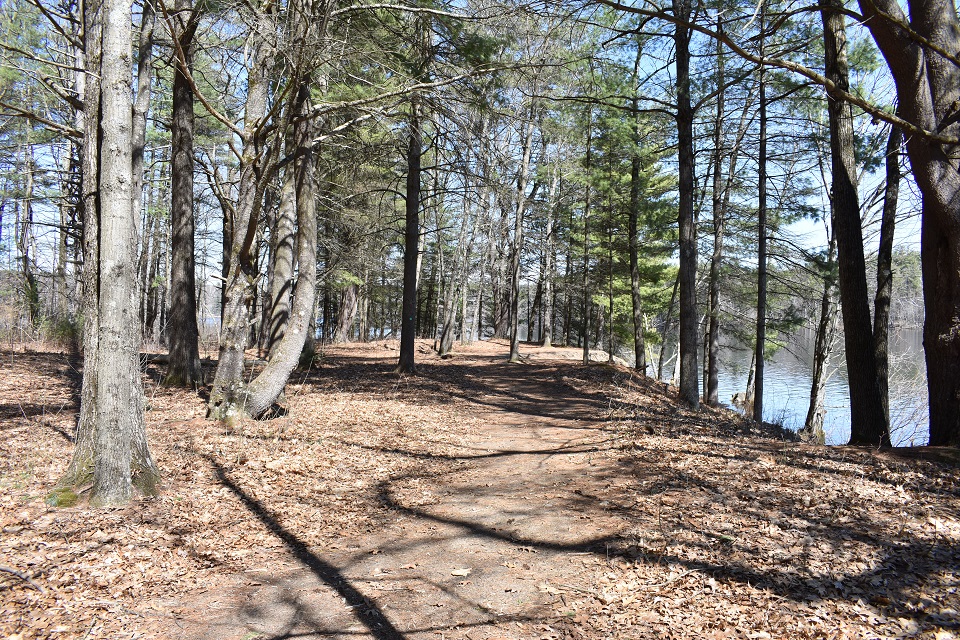 I kept wandering the green trail, occasionally exploring an open space that allowed me to get close to the water and snap a picture. Before long, I found myself in a soft, marshy area. These wetlands were hugging Big Bay on the Hudson, a wide turn that almost breaks off from the main river. A 2’ wide wooden walking bridge covered the trail, keeping my hiking boots dry. I could hear birds chirping and frogs croaking. 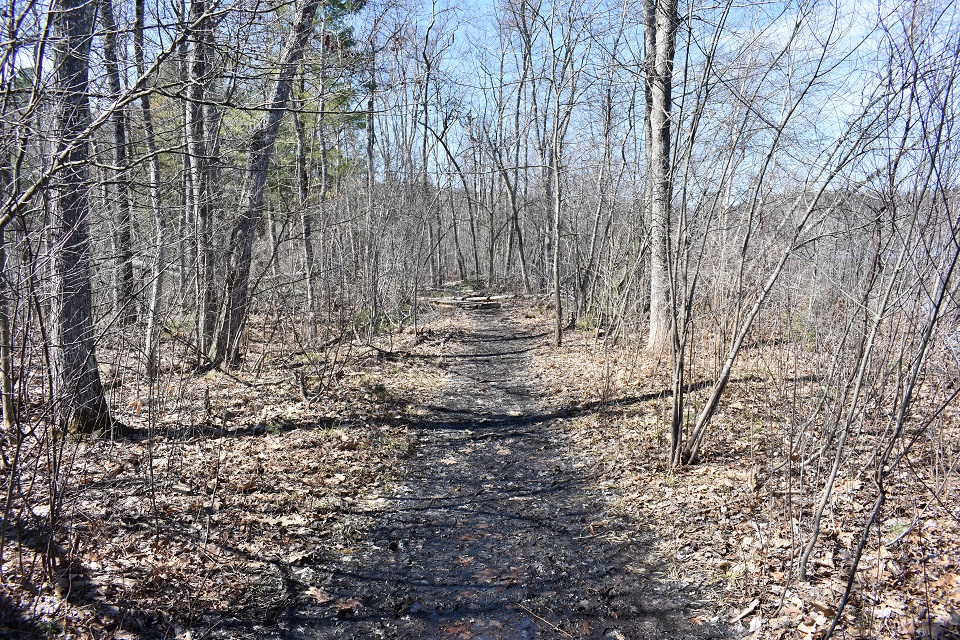 I ran into a fellow hiker who stopped to tell me, “You’ve only got a little bit of trail left before you’re underwater.” For another minute or two, I wasn’t sure what he meant, until I rounded another bend in the bridge and found the planks underwater. 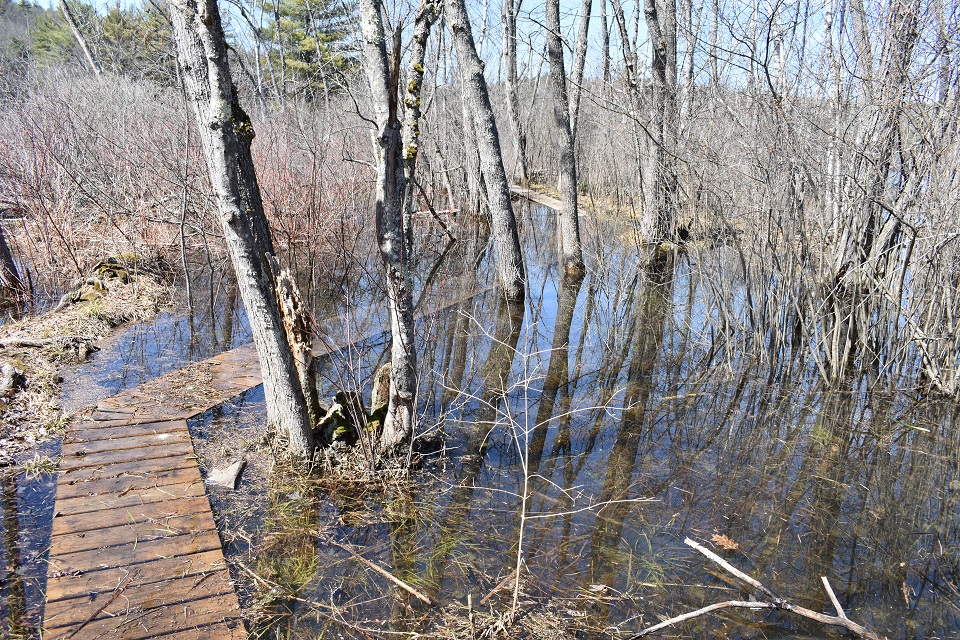 I tried to walk through the water, but it kept getting deeper and the bridge began to sink. It was time to turn around. I followed the trails that I had already walked back to my car. 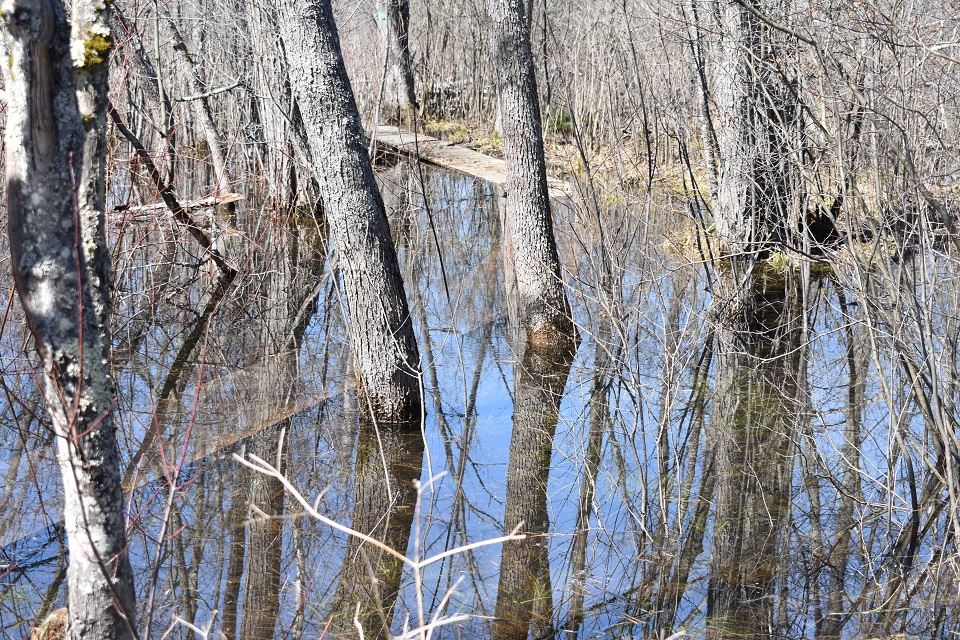 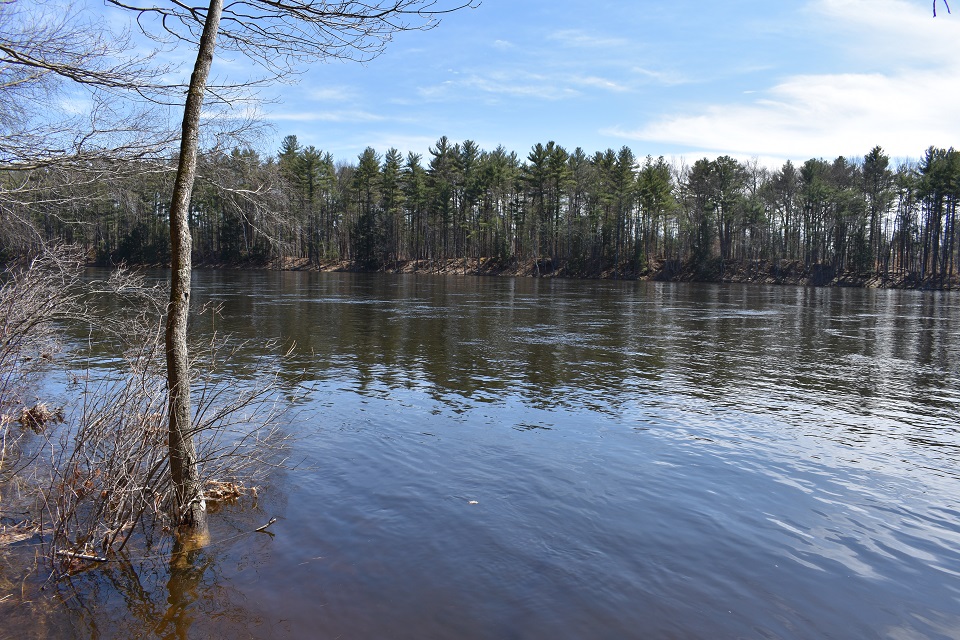