Tongue Mountain juts into the center of Lake George like a child’s finger into a bowl of pudding, separating Northwest Bay from the Narrows. The Tongue Mountain loop trail, a 12-13 mile slog, is one of the toughest hikes in the Lake George Area. The trail brings hikers up and down Tongue’s individual precipices, offering slices of lake view from various lookouts both high and low. 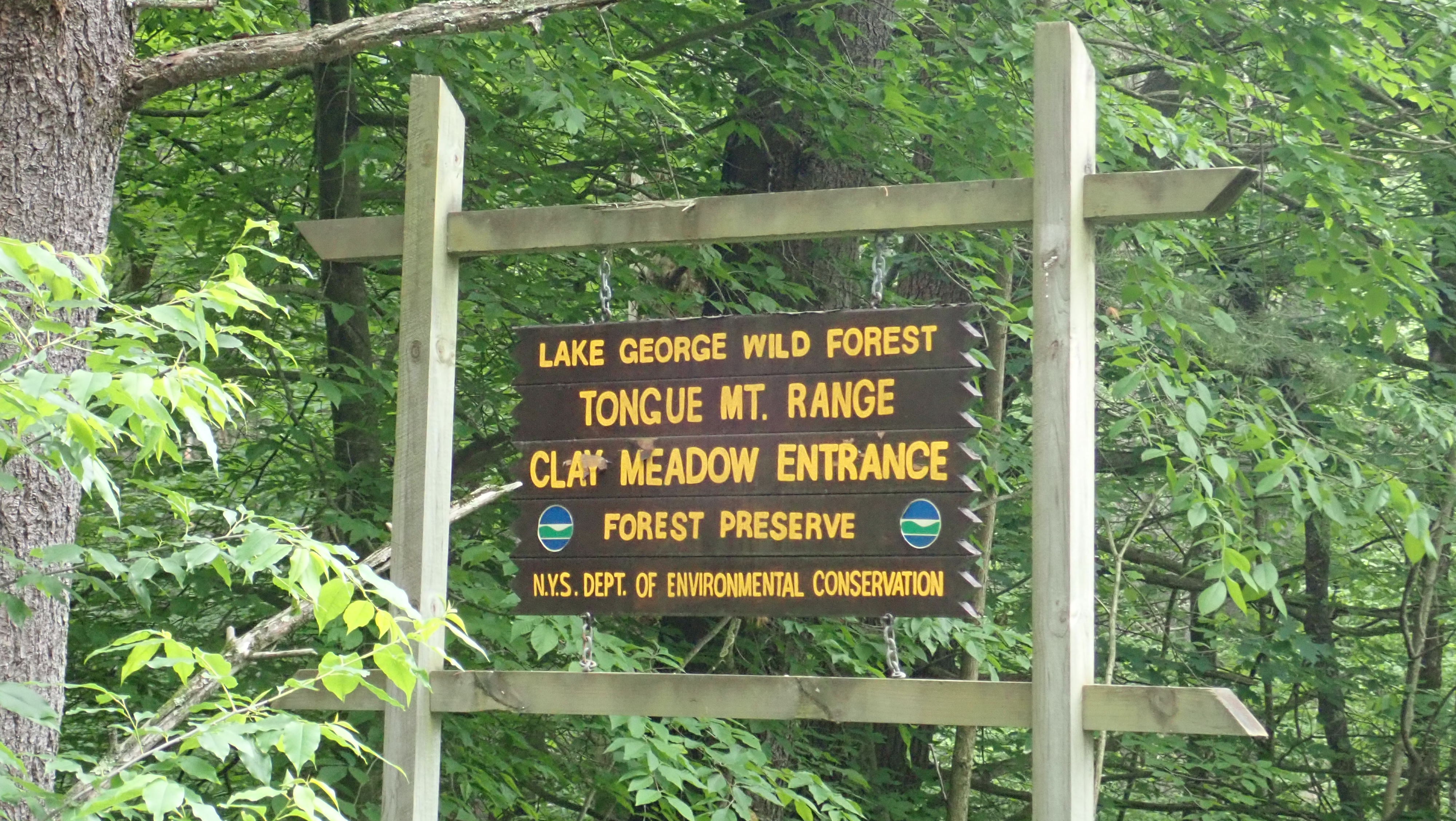 I wasn’t up for that long of a walk, so I opted to hike Fifth Peak on a chilly summer morning in June. Fifth Peak is a popular, moderately challenging hike of about six miles that leads to a wooden lean-to and pretty views of Lake George and several mountains.

I parked at the Clay Meadow parking lot and walked down Route 9N to the trailhead. A sign lists a few mileage numbers to the different spots on Tongue Mountain you can reach from Clay Meadow. They list Fifth Peak as 2.6 miles one way, which seems a little short. 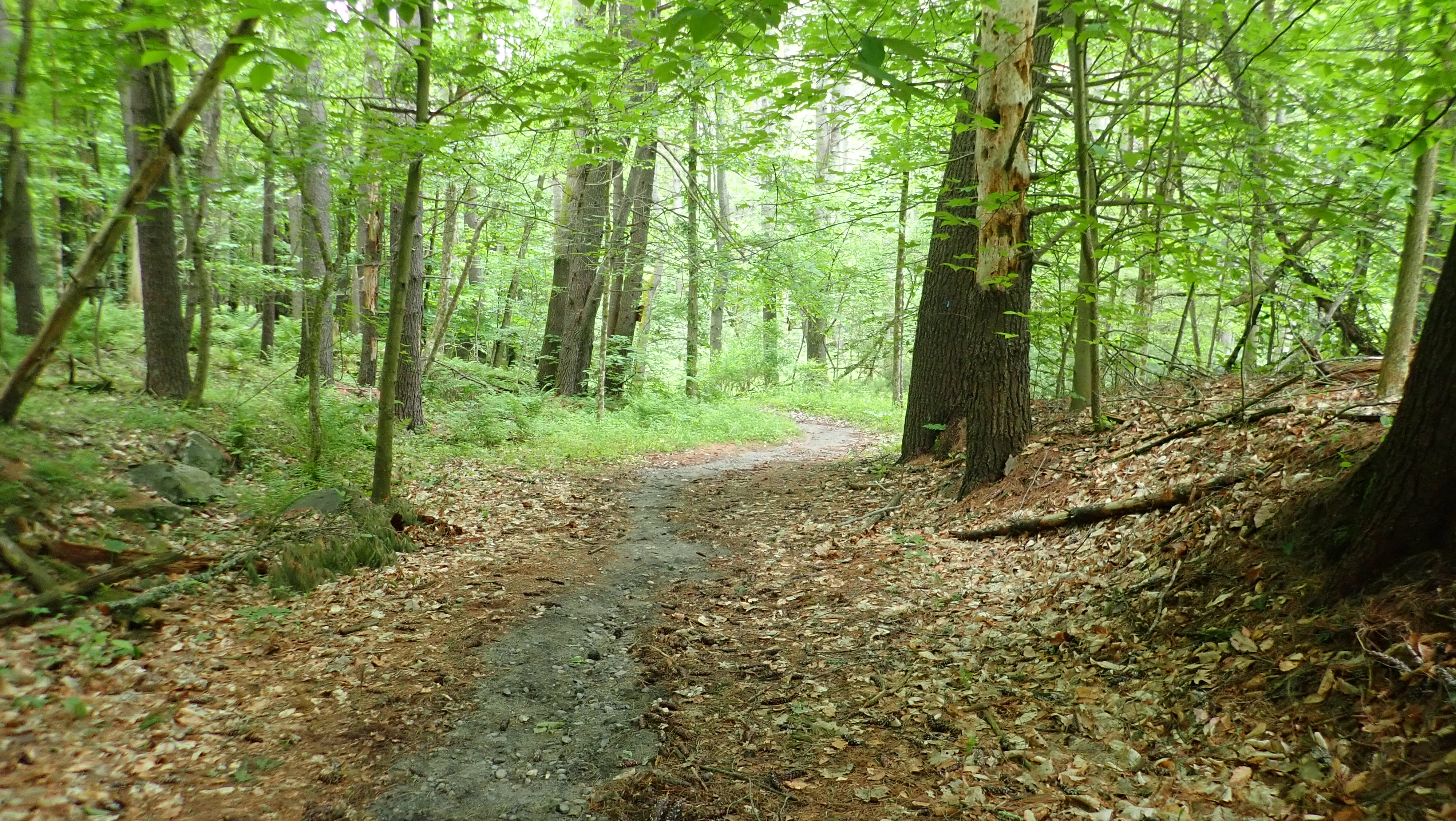 The trail begins as a narrow dirt path lined with green ferns and tall pines. The trail was wet and muddy but I sloshed through it like an off-leash dog, putting my Merrell hiking boots to good use. Downed trees and limbs are scattered throughout the forest, some blocking the trail. Faded blue DEC signs mark the trail. 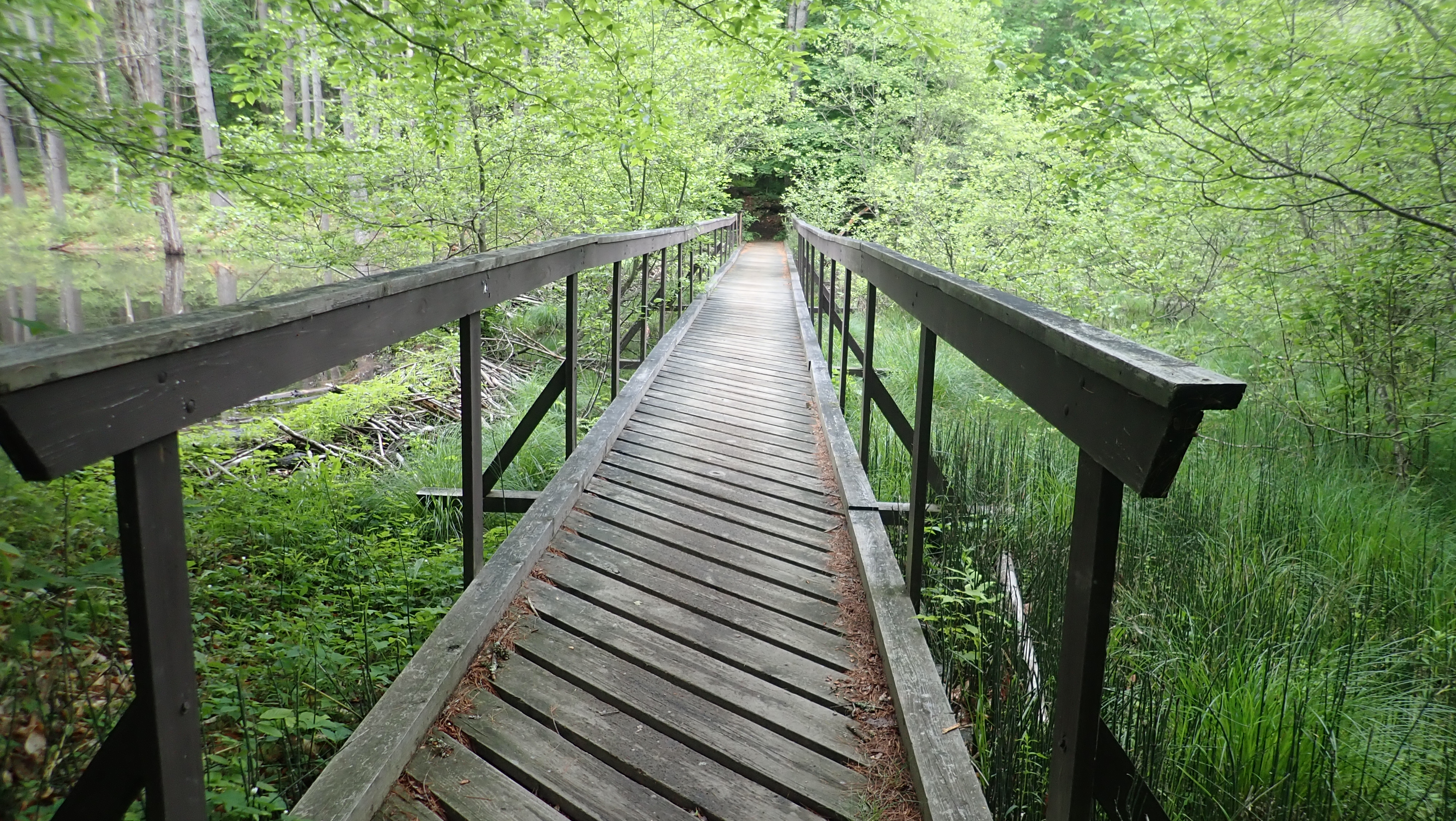 The trail to the Fifth Peak lean-to warms you up with a long flat walk for the first few minutes. A long bridge over a beaver dam is one of the cooler features of the hike. I didn’t see any beavers but I could tell they were hard at work. The bull frogs were singing.

After crossing the bridge you’ll come to another trail sign pointing towards Fifth Peak and the red trail. It estimates 2.6 miles to the lean-to and an ascent of 1,600 feet. This is where the first gradual inclines begin. The trail is wide and littered with rocks. A fast flowing stream parallels the right side of the trail. 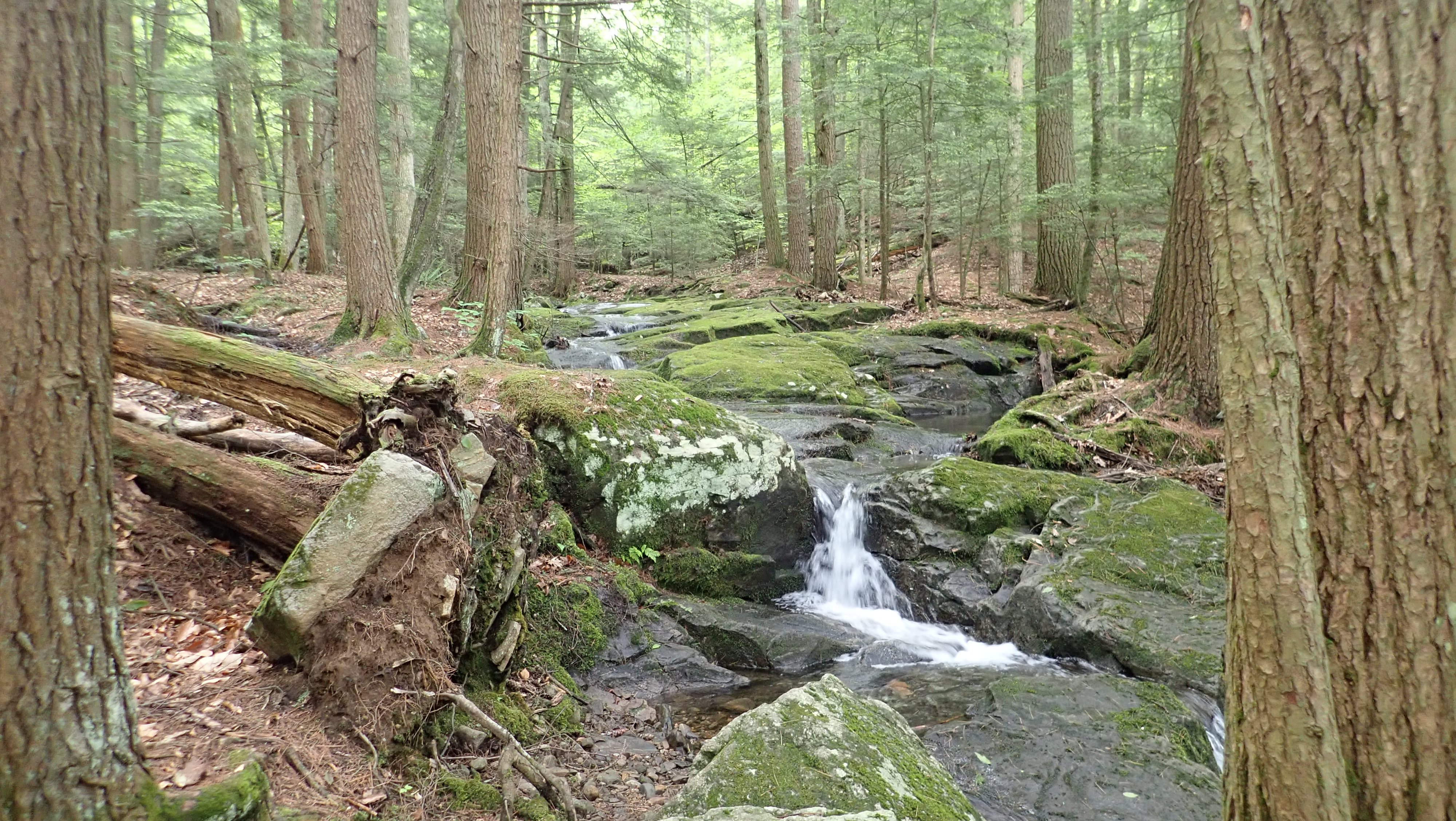 This steady hill is the most difficult portion of the hike. Roots and rocks poke out of the trail to grab your boots. Mud and mosquitos were constant. I crossed a second footbridge and then a third, both helping to span a stream that winds down the mountain. A few red-spotted newts were on the trail, doing what they do. 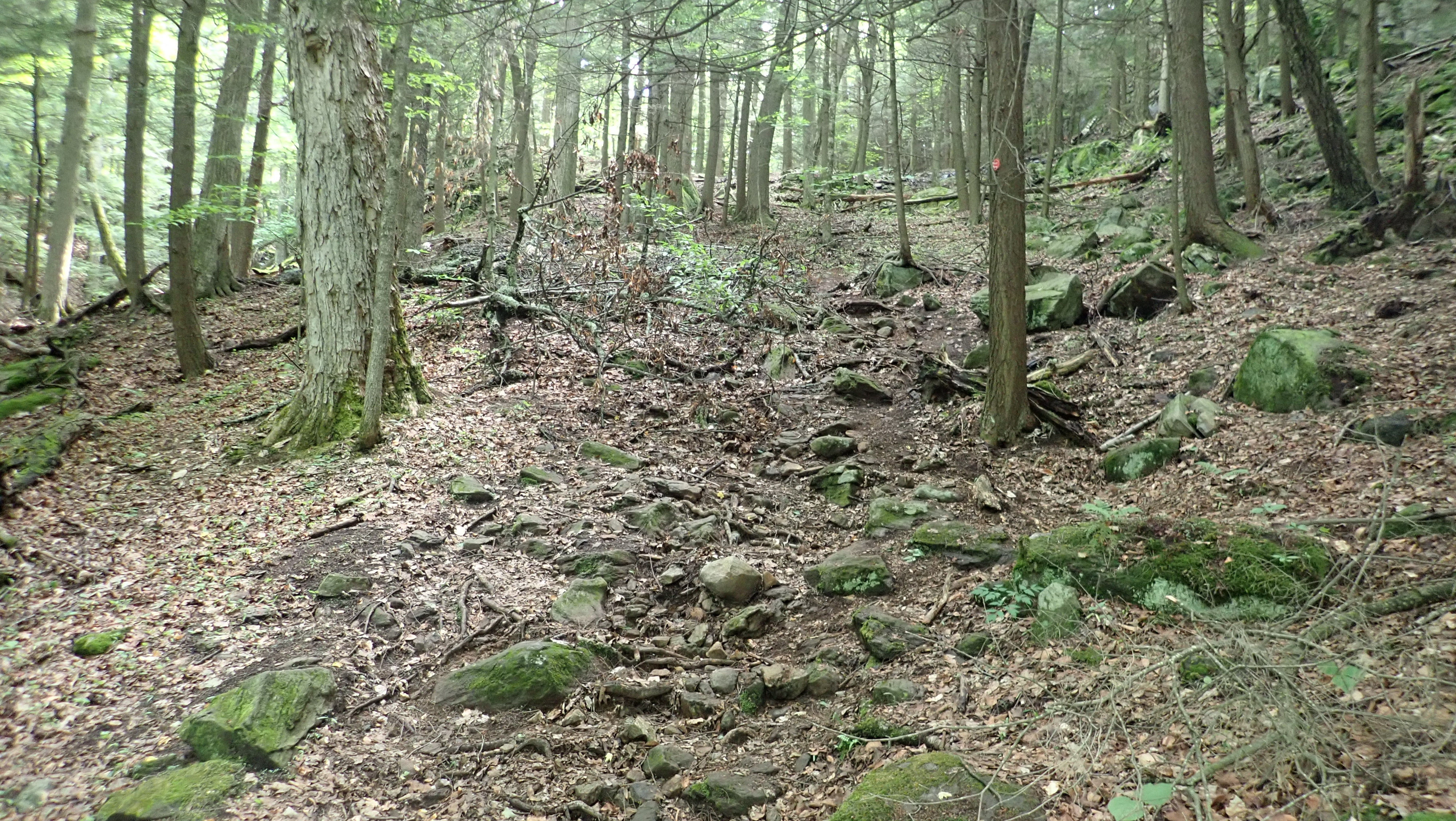 One of the great parts about Fifth Peak is the stretches of flat walking that follow the climbs. Eventually, you’ll crest a hill and reach a long, straight flat that moves through an open forest. The trail follows the previously rushing stream that is now barely moving. I walked and caught my breath, slapping entire families of bloodsuckers from my arms and legs.

After the long stretch of flat, the trail takes a right turn and you’re climbing uphill once more. The incline is sharp and steep, but the trail zigs and zags, making the hill easier to climb than it looks like from the bottom. At the top of this final steep section, I spotted some strange garlic-looking mushrooms on a wet, fallen log. I did not eat them. 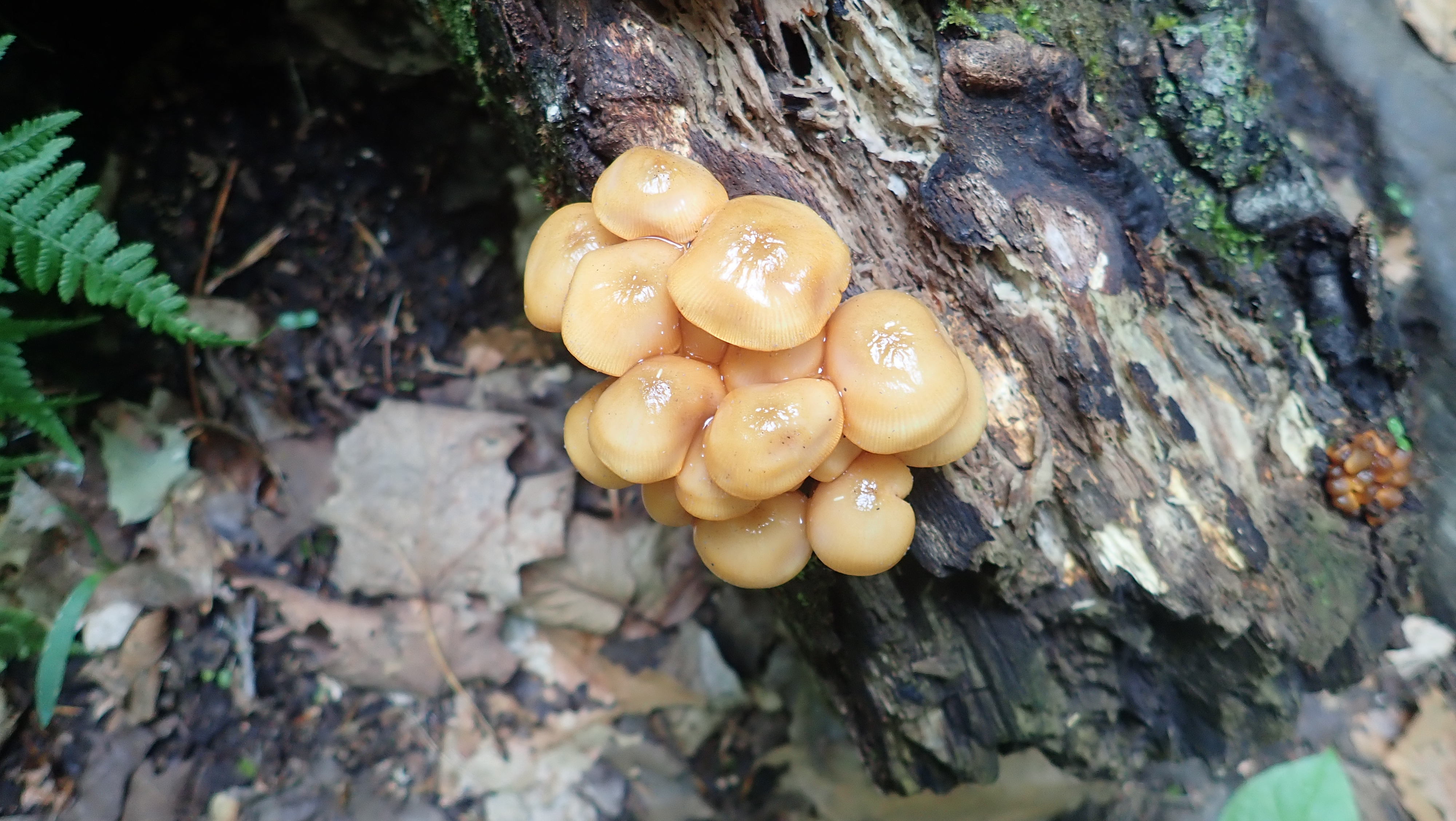 Before long I found the fork that would take me to Fifth Peak. A large and obvious DEC trail sign will point you toward the lean-to on the blue trail. Hikers can also find a much longer trail around Tongue Mountain from this point. I turned right and walked the final 0.7 miles of easy ups-and-downs until I saw the dark wood of the lean-to and blazing sun of an open clearing. 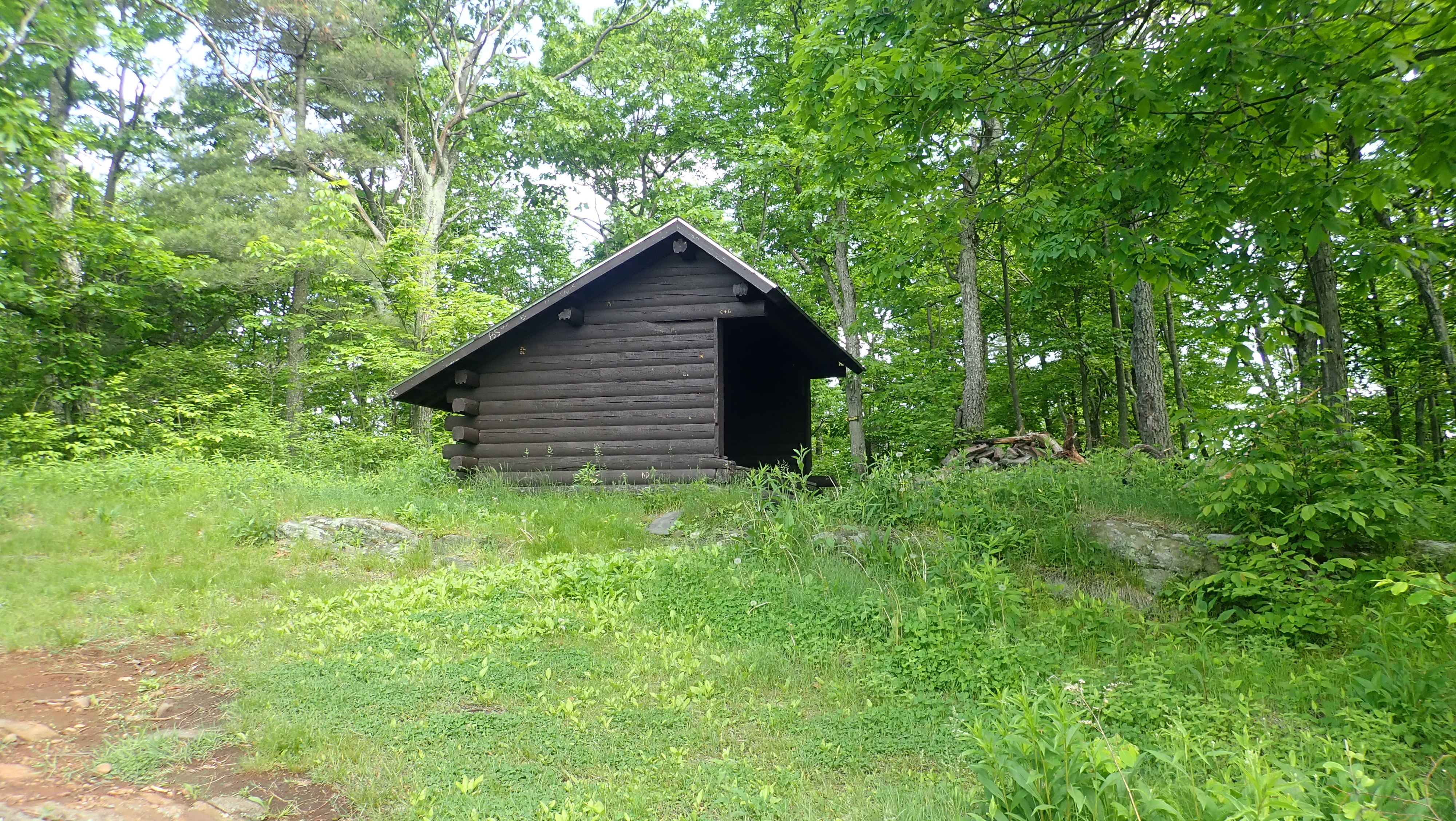 The lean-to was empty. It can sleep four to six people comfortably on a first come-first served basis. The fireplace in front of the lean-to’s opening was cold with half-burned wood. A “Toilet” sign on a tree nearby leads hikers with the urge to a square box with a lid on hinges. If you have business to take care of, you can do it there with minimal risk of being spotted.

While the lean-to is cool, the views from the summit take the cake. Just south of the lean-to is a small slice of Lake George that is slightly obscured by green tree branches. The lake was flat and quiet, without a boat in sight. 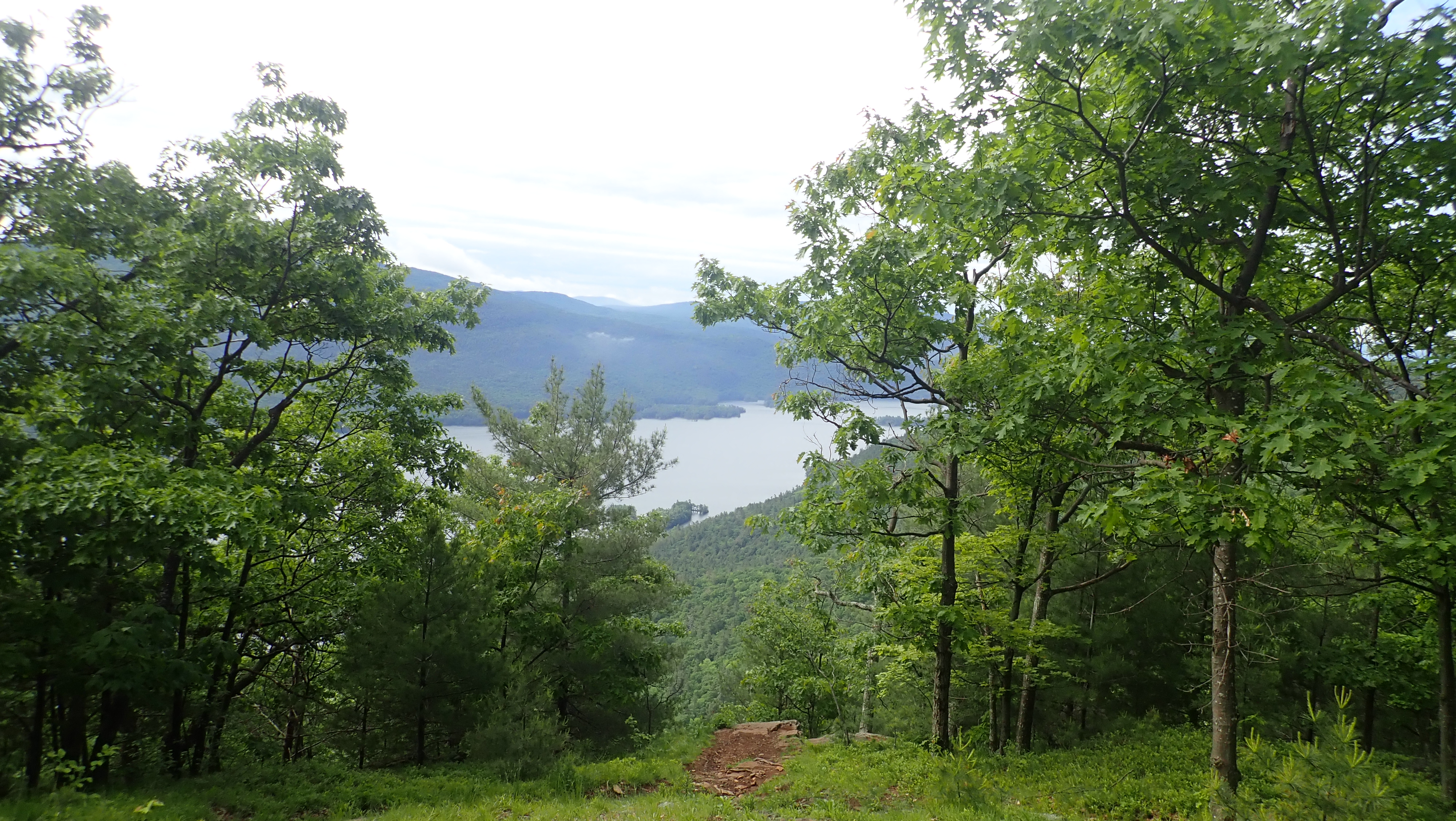 Behind and east of the lean-to is a large, grassy clearing that would have been perfect for a sandwich if I had brought one. Tongue Mountain and its multiple peaks and valleys extend miles to the south. Another little slice of Northwest Bay is within view as well. Light, translucent clouds mixed with the lush greens of mountains in the distance. I hiked Fifth Peak on the perfect day. 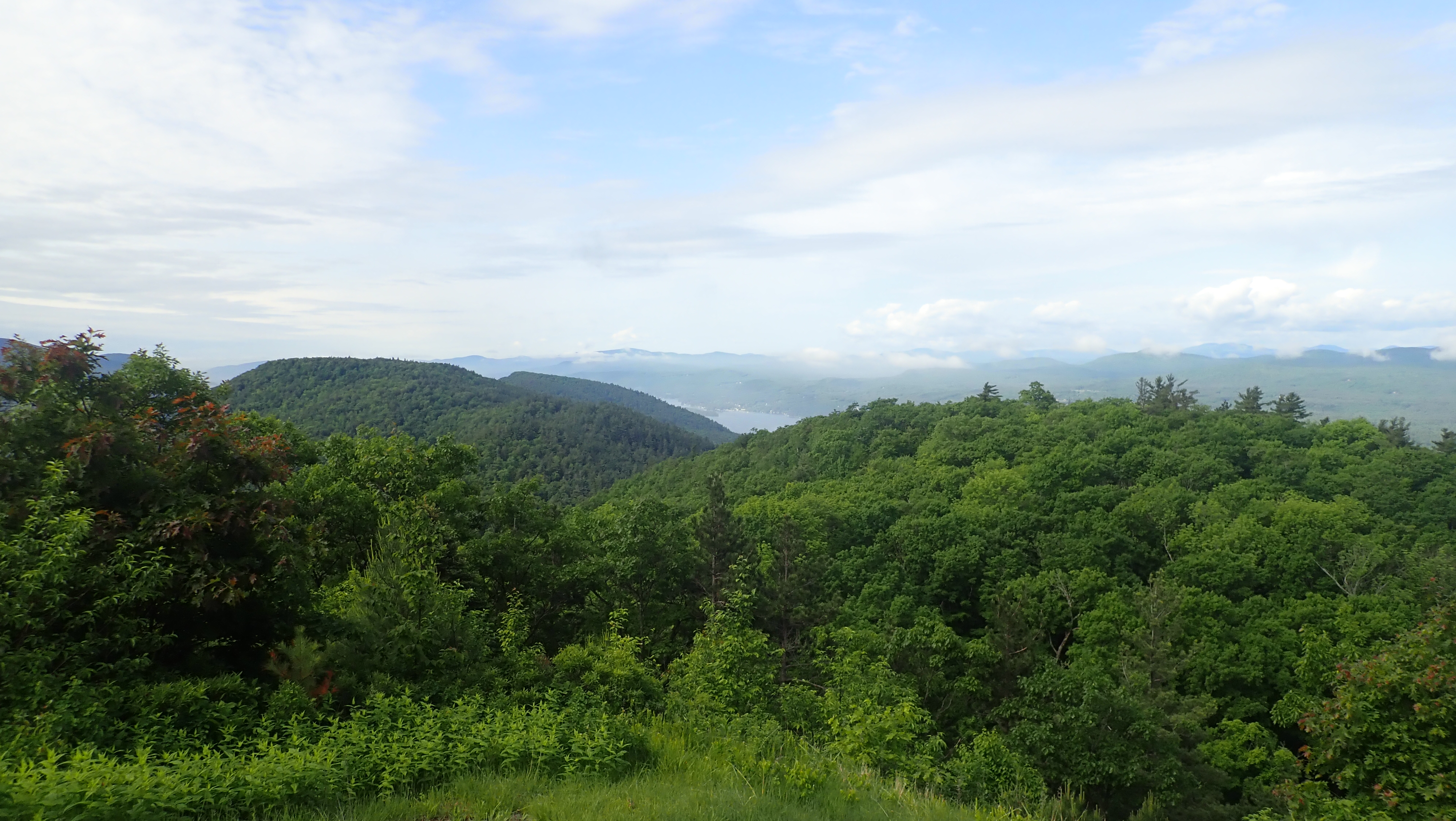 After wandering around the summit for half an hour, snapping pictures and staring at the views, I started my walk down. My legs were tired, making picking around the jutting boulders a pain. I passed a young couple carrying full packs, maybe beginning a journey around the entire Tongue Mountain Range. I'll conquer that hike someday.

Forty five minutes later I was at the wooden bridge that spanned beaver dam. Tired and daydreaming, I almost ran into this guy. Luckily, the harmless garter snake let me walk (okay, run) on by. 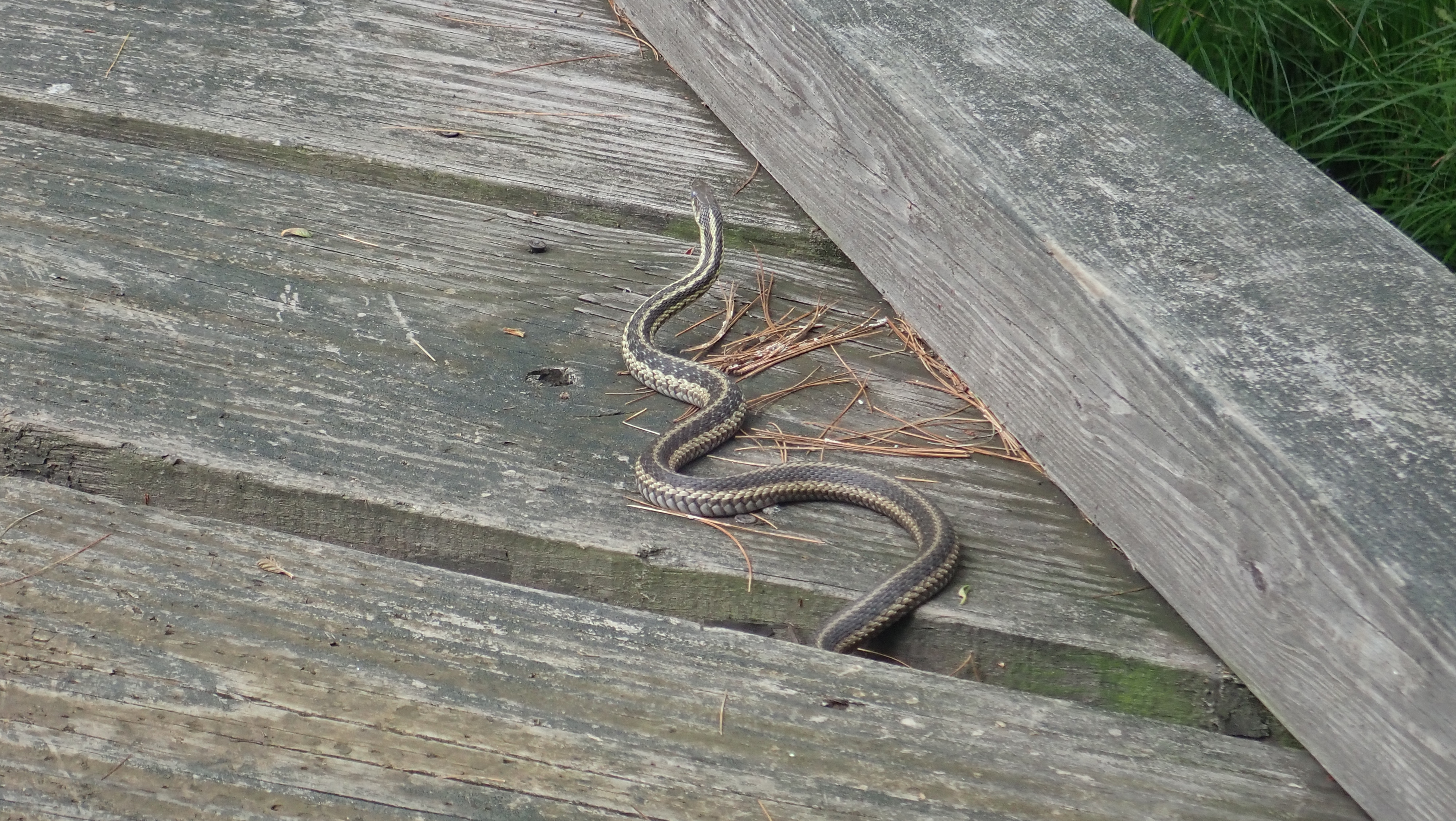