On a sunny Thursday morning with temperatures nearing 80 degrees, my girlfriend and I drove to the lakeside hamlet of Brant Lake on the northern border of the Lake George Area. Our plan was to hike Bartonville Mountain, a quick, 1.5 mile round trip hike with a beautiful peek of Brant Lake just before the summit.

We hit the road before 9 a.m., discussing breakfast and bug spray, and headed for exit 25 on I-87. We took a right off the exit and followed route 8, a winding road that brings you over the Schroon River and into Brant Lake. The morning was hazy and hot and the sky was a vibrant blue. After about a mile and a half, Market Street and Brant Lake came into view. We took a left onto Market Street and pulled into The Hub’s parking lot.

The Hub is a service-based bike shop that sits in a square building with brown, hardwood floors. Cyclists can bring their rides in for tune-ups, brake adjustments, cable replacements, and a whole medley of other fix-ups. But The Hub is so much more than a pedaler’s paradise. They’re an eclectic cafe with an open kitchen that serves breakfast, lunch, and dinner. The menu features items like breakfast pizza on naan flatbread, cold cut panini sandwiches, soups, salads, coffee, and more. They also have local craft beers on tap, a full, z-shaped bar, and live music on many evenings throughout the summer. The place is flat-out cool, whether you’re pedaling miles a day or you still haven’t removed your training wheels.

We went into the Hub to sign into the trail on a small notepad on the counter. The owners request that anyone hiking Bartonville Mountain register before hitting the trail. After smelling the frying bacon and locally roasted coffee from the open kitchen I had a good feeling we’d be back in for a post-hike breakfast.

We walked back outside, retied our boots and tightened our backpack straps, and started the hike. The trail is a meandering dirt path with intermittent rocks to dodge. Occasionally there’s a large spread of bald rock to cross. The trail is two to three feet wide and well-marked with abundant red trail markers that are almost always in view. About five minutes into the hike there’s a bird’s eye view of the backside of The Hub and the southern edge of Brant Lake.

The pitch of the trail is rarely steep. A few sections had us breathing hard but they always flatten out quickly. We're young and in decent shape, but we’re not exactly marathon runners. We stopped once to perch on a few rocks for water, but heavy rest wasn’t required.

The common sounds of civilization are always within earshot. Cars driving on Market Street and folks pulling into and leaving The Hub remind you that you're not far from the world below. It would be tough to get lost on this one. Of course, the tweets and rustles of usual Adirondack birds and critters are also abundant.

The trail stays narrow and well-worn. The surrounding forest changes from wide open to compact several times throughout the hike. There are a spots where a view of Brant Lake and the distant mountains may be possible once the leaves fall. Massive boulders are scattered on the sides of the trail. Hikers will often have to step over or around jutting roots and rocks. Experienced Adirondack hikers will recognize many of these features.

As we were driving to the trailhead that morning, we realized we had forgotten our bug spray. We discussed turning around but decided not to. There was a point during our hike when we remarked how few bugs were buzzing around, especially in the shade. That didn’t last as we crossed into some sunny spots. The black flies, mosquitos, and deer flies were flying around and biting. This is to be expected. Bring your bug spray.

The first view of Brant Lake is near the summit. And what a view it was! Behind a mask of trees, the lake spreads out far below, cradled by mountains. The trail continues to the left and the ground slopes off to the right. Hikers can hop from rock to rock in search of the best view or for a perfect photo op. It’s not hard to take a solid picture when the subject is the Lake George Area. The lake looked crisp and welcoming, and the weather was warm enough that we were tempted to hit the beach after the hike.

After admiring the view of Brant Lake I spotted some wildlife on the side of the trail. An American Toad (I think) was hopping through the brush. It narrowly escaped death underneath my Marmot hiking boot and escaped into the safety of the forest. 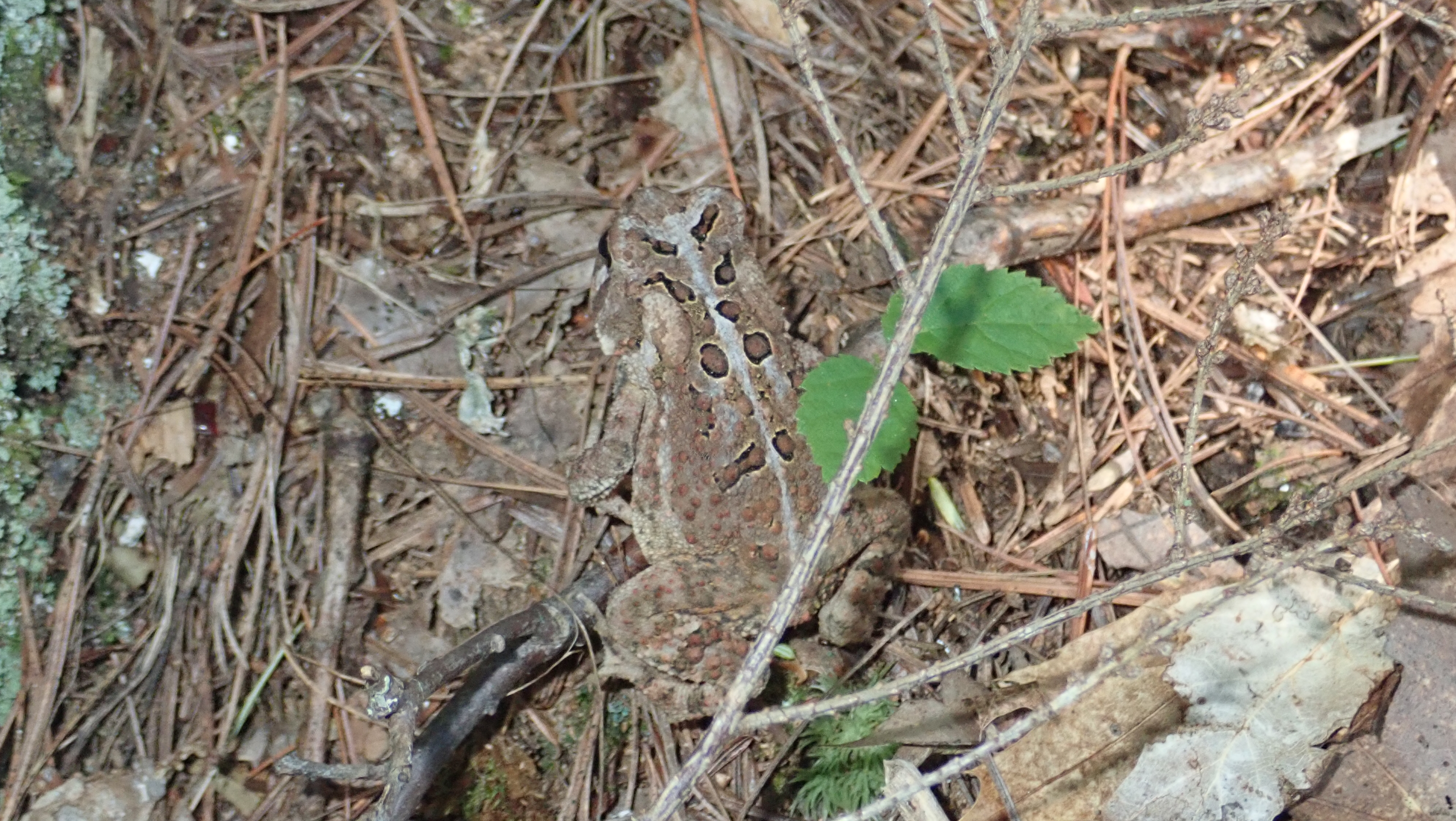 The trail ends at a large clearing where orange tape signals the end of the trail. The Hub sells picnic lunches for hikers to take with them, and this clearing is the ideal place for lunch in the shade. If you’d rather eat in the sun, head back down to that gorgeous view of Brant Lake and pick a rock to sit on. We sat down, slugged some water, and discussed how lucky we were to be hiking in the Lake George Area on a Thursday morning.

We started to hike down, reluctantly, after about 20 minutes. The trail is as well marked on the way down as it is on the ascent, but make sure you’re keeping an eye out for those red markers. In fifteen minutes you’ll find yourself at The Hub’s back door once again.

Then it was time to eat. We went up to the counter and studied the menu. It was about 10:30 a.m., so we both decided to go with breakfast. We ordered a sausage, egg, and cheese with roasted red peppers on Italian bread and a classic bacon, egg, and cheese on Italian. The sandwiches were grilled paninis, so the cheese was melted and the sandwich was hot. We agreed that both sandwiches hit the spot. The only thing that would’ve made breakfast better was some live music or a local craft beer.

So that was Bartonville Mountain. An easy-to-moderate, short hike behind an awesome bike shop. Next time you’re in Brant Lake stop into The Hub, explore Bartonville Mountain, and grab a drink or a sandwich. There aren’t many bike shops where you can drink a refreshing beer after hiking a mountain in the Lake George Area, so you don’t want to miss this one.