A few frozen hours at the Lake George Winter Carnival

My girlfriend and I wanted to experience another year of that winter happiness that lasts all February long. We decided to check out the carnival on the opening Saturday. The weather was clear and the lake was covered with a foot of solid ice. We found a parking spot on Montcalm Street, two blocks behind the main drag, and walked towards Shepard Park.

The village was lively – the feeling a town takes on during its proudest event of the year. Families with kids were walking towards the lake decked out in their warmest snow boots and thickest ski jackets. Cars streamed down the backstreets continuously hunting for an open piece of curb. Everyone had a place to be.

Shepard Park is that place for most of the carnival. That’s where we headed. We strolled by a busy Leonelli’s Playland Arcade and several busy restaurants. A horse and carriage briefly clopped across our field of view, carrying carnival-goers up the street. A unique and comfortable joy was in the air.

We crossed Canada Street and walked into the park, officially marking our entrance into Winter Carnival territory. The first sight to see was a massive bench carved from ice. We wanted to stop and test the seat, but kids were crawling all over the bench and not leaving much room for us. We kept moving down the sidewalk in search of something else to do.

Shepard Park was packed. Our next stop was to watch someone chainsawing a huge chunk of wood in front of a crowd of patient onlookers. We watched the artist for a minute, wincing as he maneuvered on three plastic boxes and chunked pieces away. He was carving the shape of a bear, and it looked pretty darn good. We left before it was complete, but hopefully carnival-goers who attend later in February will see a roaring piece of art.

We kept heading down the sidewalk and came to a long line that snaked underneath the Shepard Park Amphitheater. This was the line for the chili cook off, one of the most popular events of the Lake George Winter Carnival. The line was about 100 people long, and since we had already had a robust breakfast (doughnuts), we skipped the chili and kept moving towards the lake.

Unfortunately, we had just missed the outhouse races. Teams of racers were pushing their brightly colored wooden wonders off the lake as we walked down. However, hundreds of carnival-goers were on time for the race. The frozen lake was swarmed with people. Couples had their arms around one another, holding each other up with gloved hands. Little kids were sprinting and sliding on the ice in their snowboots, laughing as they fell. The atmosphere was jolly, and we were happy to be part of it.

Our Director of Tourism, Joanne Conley, made it to the race on time. Here are her thoughts:

"Orange cones served not only to keep teams in their lanes, but also to keep spectators safely away from the outhouse trajectory.  A bullhorn reminded us that an outhouse on skis being pulled by a team of racers has no braking or steering system. Each racing team had a theme and some dressed in keeping with their theme; most had some sort of traction on their boots. While the winning team after double elimination heats was a multi-color aerodynamic sled, few would argue that Best of Show should go to the volunteer firefighter team who competed in their jackets and helmets, replete with a fire truck siren and flashing lights!"

A helicopter was in a corner of the crowd with a line of people waiting to take flight. A lone snowmobile was revving its engine and doing donuts, and a few ATVs were navigating their way through the crowd. The Lake George Winter Carnival was full steam ahead, even on its first Saturday. 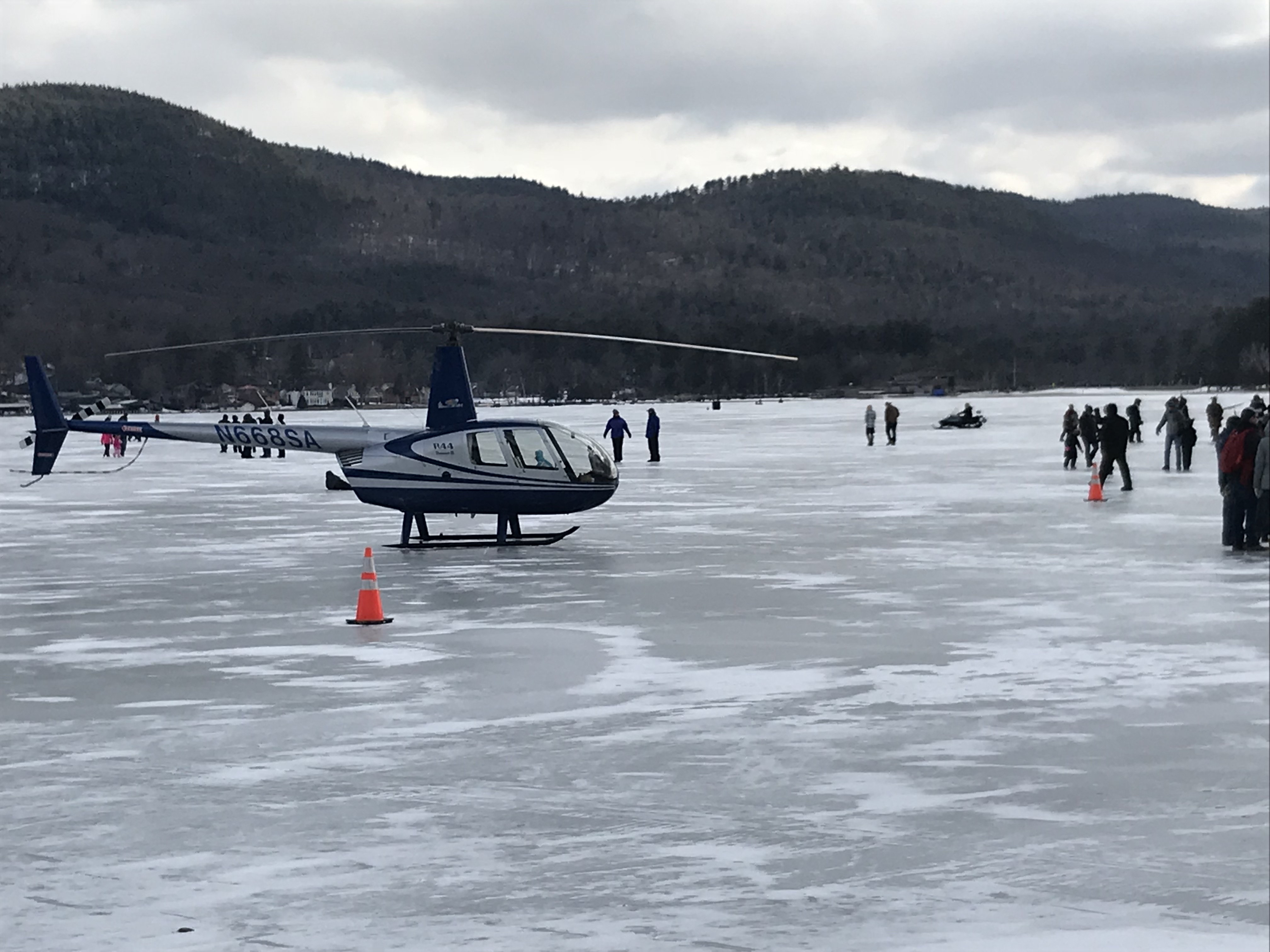 It was time to join the party. We carefully slid out onto the ice. People young and old, locals and visitors, stood on the ice and admired the towering mountains and the beautiful sky. After taking in the scene for a few minutes we slipped and skated back to the beach.

We walked south among dozens more people taking photos and enjoying the revelry on the sidewalks. A refreshment stand sold hot dogs and drinks, and a radio station’s car blasted tunes towards the crowd. We ventured out to the end of the pier, abandoned during the winter months, and stood on the cold benches to take a photo of the crowded ice. With frozen feet and wind in our face, we decided to head inside. The Lake George Beach Club looked welcoming.

We opened the door to a jam-packed restaurant. Every stool at the U-shaped bar was occupied, with people standing two rows deep waiting for a drink. Despite the crowd, every patron seemed to be giddy, taking bites of their burgers or wraps, devouring wings, and sipping on beers. There wasn’t an empty table in the house, and even the servers and bartenders were enjoying themselves.

We squeezed our way to the bar and ordered two Bear Naked Ales from Lake George's Adirondack Pub & Brewery. After our beers came we snuck over to the stone fireplace to warm up and relax. Double Vision, an acoustic guitar and drums duo, was serenading the crowd with their renditions of classic rock tunes.

The fire was blazing and we were happy to be standing in front of it, moving briefly so an employee could throw another log on. There were two beer pong tables carved from ice and an ice bar serving drinks – further proof that ice bar season extends into February – on the outside deck. We didn’t play any beer pong, but I assume the party moved out there eventually. We finished our beers, placed our empties on the bar, and left Lake George Beach Club behind.

Snowflakes fluttered to the ground as we wandered back to our car. Families continued in a constant stream towards the lake. As we walked, we talked about coming back another weekend. Maybe for the ice races, or to watch a Polar Plunge. Definitely for another drink. The Lake George Winter Carnival only comes once a year, and we wanted to get our fill.