These are the ski conditions that dreams are made of.

The stars aligned last week to bring not one, but two significant snow storms.  While downhill ski resorts have snowmaking systems in place to offset that which Mother Nature may not provide, cross-country skiers need to rely on lots of natural snow. When I woke up to bluebird skies on Saturday with temperatures in the mid-teens, I knew this would be the perfect day to ski in Cole's Woods. To say that conditions were good would be an understatement. Conditions were epic.

Cole's Woods is a multi-sport recreational hub located in Glens Falls, neatly tucked behind the YMCA. A dedicated team of volunteers meticulously till and groom the trails to include a generous skating lane alongside classic tracks. There is also a dedicated snowshoe trail, which makes this the perfect destination for winter aerobic activity. There are several parking areas offering easy access to the trail system. I parked near the ice rink with the intent of warming up around the running track loop before I entered the wooded trail. 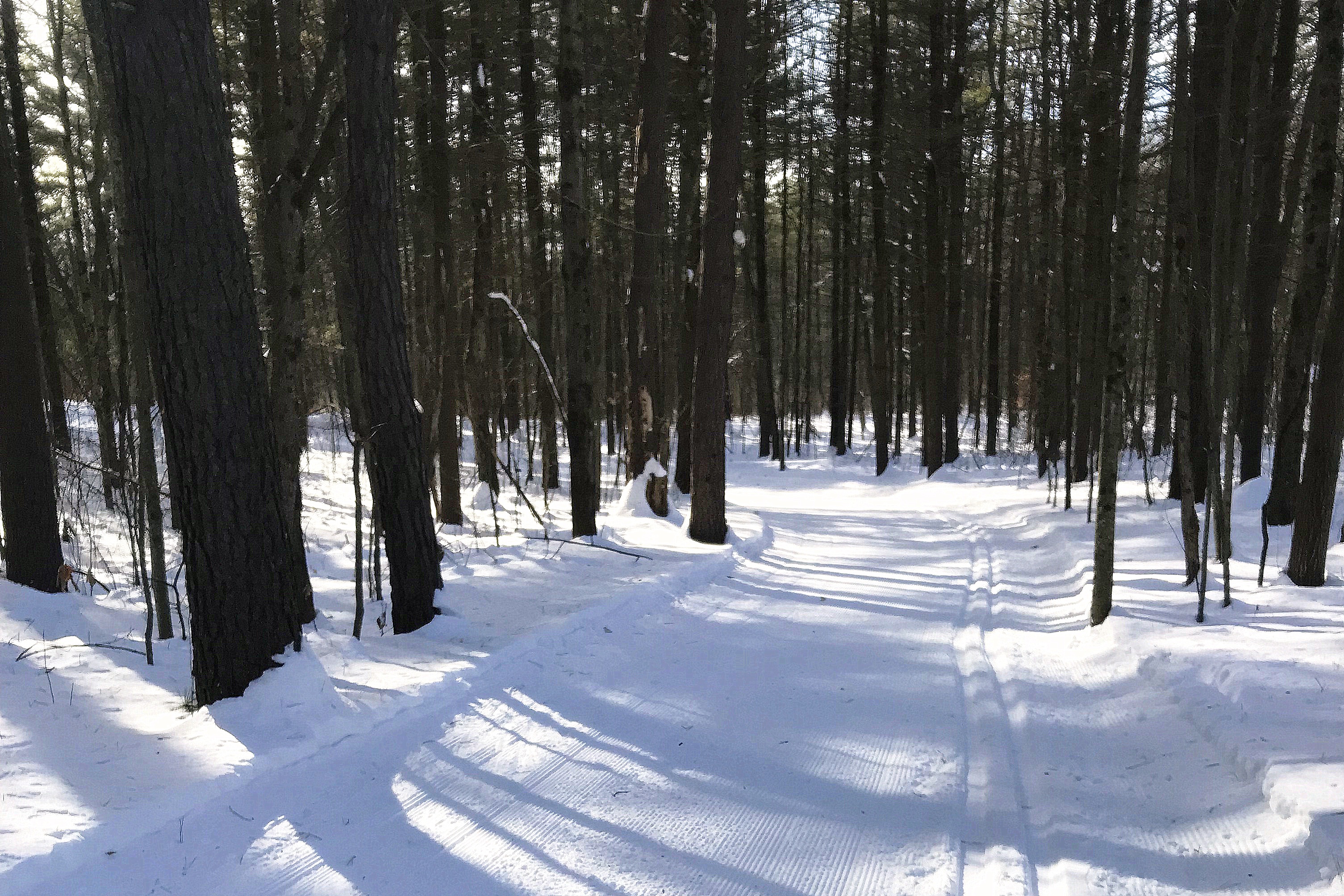 It quickly became apparent that trails had been recently groomed as a carpet of fresh corduroy welcomed me. A family of four entered the loop just ahead of me and I followed them over the first bridge to the Four Corners intersection. At this point I veered right onto an ungroomed perimeter trail while the family of skiers followed the red markers of the 5k race trail. After a long and gradual uphill I veered right and then looped over to re-join the tracked red trail. When I came upon an intersection where I had to choose between the Hard Way and Easy Way trails, I opted for Easy, but the two trails soon rejoined and led me to a short and steep uphill. 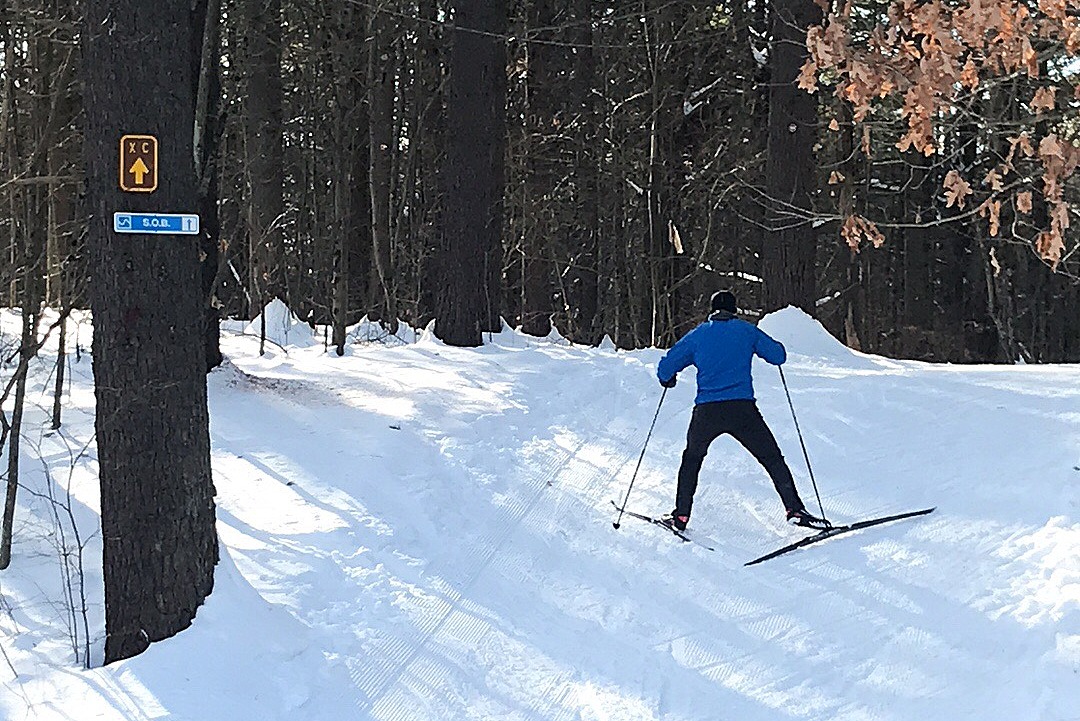 Continuing at an enjoyable pace I glided past two rather large "invisible water towers" at the northeast corner of the system and toward my favorite trail - the Snake Trail. The Snake is a long and gradual downslope that will make even a novice feel like an accomplished skier as it gently lulls you downhill. Next up is a short, flat stretch that parallels Halfway Brook. Although temperatures had been sub-zero for many days, the brook babbled it's way through the park as it flowed downstream from west to east. On the left I came upon the steepest uphill climb on the course, appropriately named The Wall. Two rather proficient skate skiers flew by me uphill, although they did put an honest effort into the climb. I dutifully angled my skis outward and mustered a quick herringbone climb to the top. Even though temps were in the teens, a workout like this will warm you up in almost no time.

As I approached the last bridge crossing I heard the hum of the grooming machine from behind. I jumped as far to the right as I could, allowing the groomer to traverse the bridge handily. The corduroy left behind was a thing of beauty to behold. 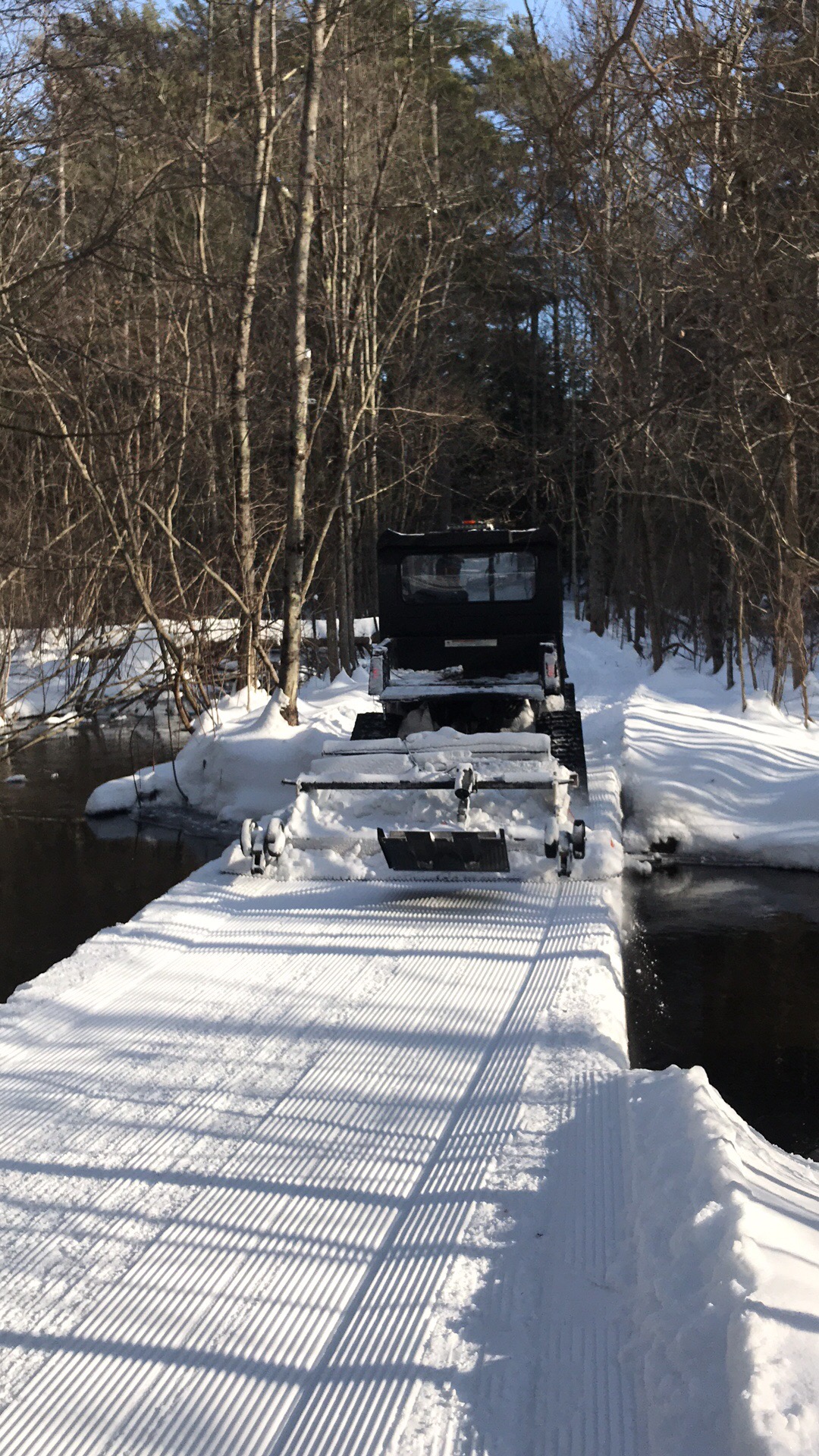 By the time I returned to the ice rink parking area the Rec Mapper app on my phone tallied my mileage to a snaky 2.5 mile loop. Use the above map to give you a lay of the land, and keep an eye out for signage/mapping around the system providing a "You are here" perspective.

If you are looking for trail conditions, check out this link: http://coleswoods.weebly.com/trail-conditions 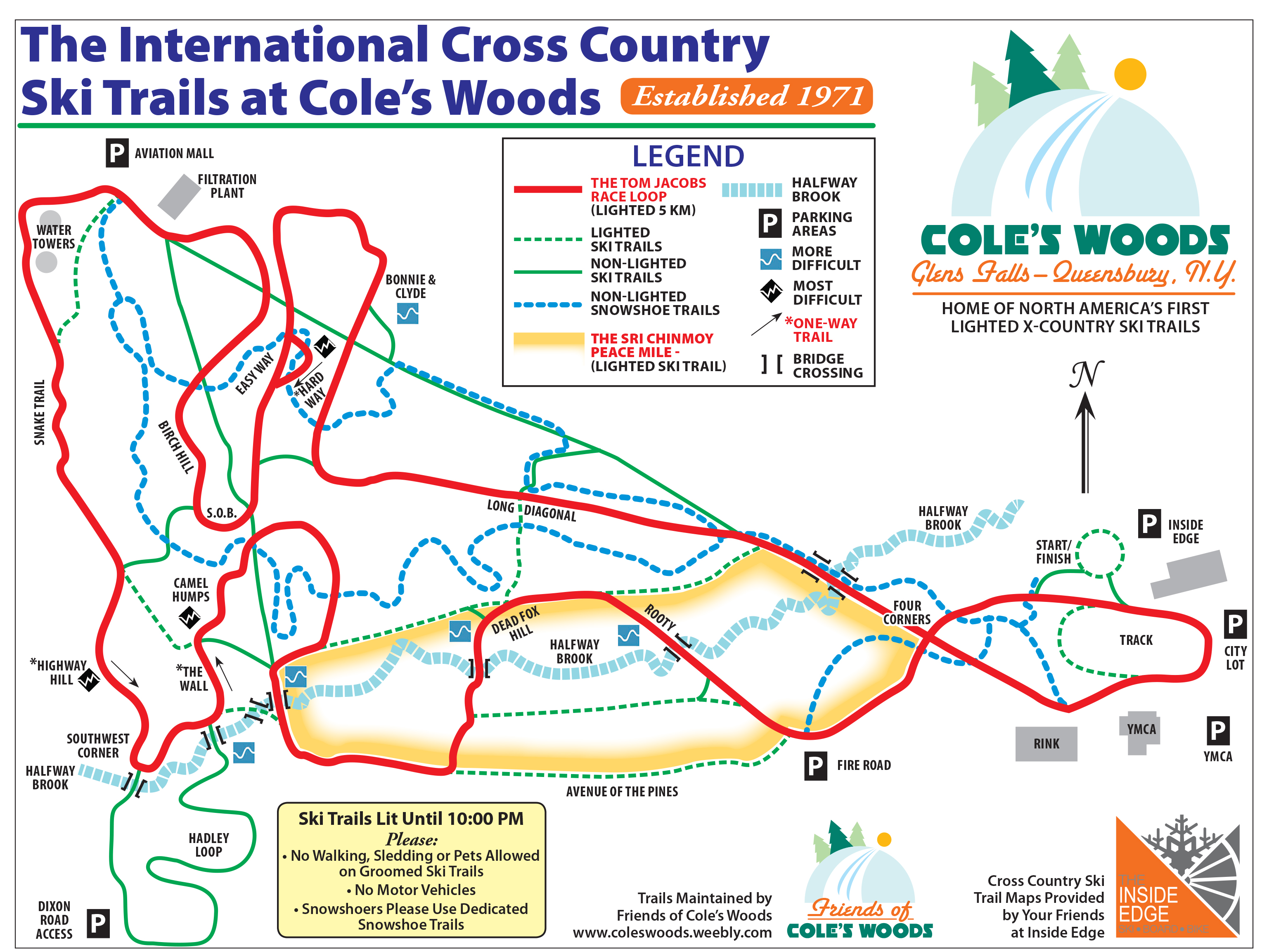 The 5k Race Loop at Cole's Woods is lighted until about 10:00 p.m. It's always wise to bring a headlamp in the event that a light is out and the trail is a bit dark.

A dedicated snowshoe trail within the Cole's Woods park system is noted by a blue dotted line in the map above. The trail is clearly marked and easily accessible from several locations, with the ice rink parking lot offering the best starting point. For the most part, the snowshoe trail is distinctly separate from the ski trail, although the two cross on many occasions. When snowshoe and ski trails run in tandem, snowshoers should always keep to the far right of the classic tracked trail.