A “Cool” Trip to an Icy-Hot Event: Winter Fun at the Sagamore Ice Bar and Bolton on Ice

A first-hand look at Bolton Landing during the Sagamore's annual ice bar!

Although I’ve been a lifelong three-season visitor to the famed Sagamore Resort located in scenic Bolton Landing, I confess that the first time I attended the hotel’s annual Glacier Ice Bar & Lounge was only recently. Even though the event is relatively new, you’d think it was already a decades-long tradition, and it attracted cold-weather loving revelers from far and wide.

Carving more than 18,000 pounds of ice into an incredibly detailed outdoor bar, barstools – even an ice “luge” for funneling chilled vodka into glasses – is no easy feat. The process takes days of careful, detail-oriented work. And of course, the weather also needs to cooperate. According to the Sagamore’s general manager, Tom Guay, ice carving begins on the Monday before the event. Each night, the ice is protected by insulated covers. Of course, the sun is tough on the ice and it can melt even if the temps dip below zero.

The resulting ice sculptures are works of creativity and artistry – and they’re also utilitarian, to boot. The bar is a bona fide work station, the stools and other seating areas in the event offer perfect little gathering nooks, and the photo-ops are fantastic! 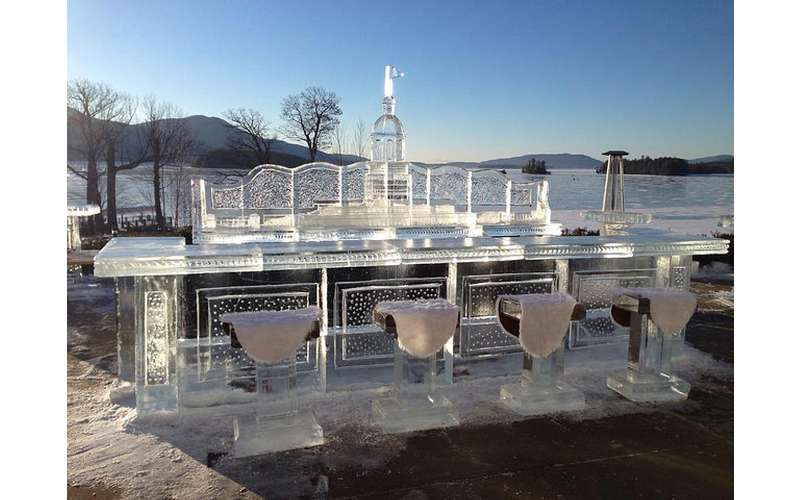 I decided to visit the Sagamore on one of the event's two January weekends at the insistence of friends traveling here from the south, who had also not yet experienced the Sagamore “on ice."  Being a “local,” I wisely opted to drive the few extra miles to NYS Northway Exit 24 and approach the charming village of Bolton Landing from the north, to avoid the traffic arriving from the south. This route also gives travelers an amazing view of the lake, seen from a higher vantage point than other routes through Lake George. Once I reached the northern edge of Bolton, the majestic Sagamore came into view, a tribute to the early days of the Adirondacks as America’s original vacation spot. The Sagamore Hotel, which occupies Green Island on Lake George, is one of the only remaining original Adirondack hotels, and its history has enthralled historians and writers and filled numerous books.

When I arrived, the quaint little bridge that connects Green Island and the hotel property with the village was bustling with people bundled for warmth and heading on foot up the drive to the hotel. Others who had traveled by car were parking in lower lots and hopping on the shuttles that ran regularly, carting passengers to and fro, between the hotel and the parking areas.

I’d been expecting it to be a busy scene; but I wasn’t prepared for the crowds the ice bar attracted. The brisk walk to the hotel was invigorating, and I marveled – for perhaps the millionth time – at the awesome beauty of Lake George and how lucky I was to have this treasure in my own back yard. 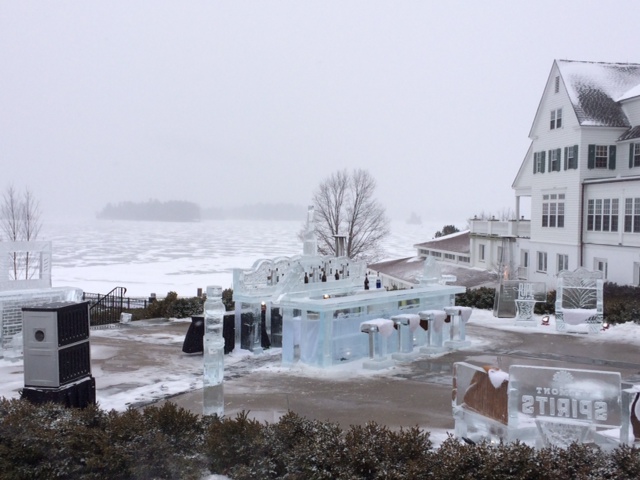 Once inside the hotel, I started out in search of my friends. Of course, I was pretty sure I’d find them somewhere near the nearly 20-foot long, solid ice bar that was serving an assortment of yummy vodka cocktails, courtesy of Tito’s. The frigid barstools were covered with soft sheepskins to keep bottoms warm and cozy as guests perched on them, socializing.

I quickly located my friends and we proceeded to wander about, taking in the amazing sculptures that bordered the tented outdoor area. My favorite was the icy snowmobile and, of course, we all had to get our pictures taken as we “revved” the frozen engine. 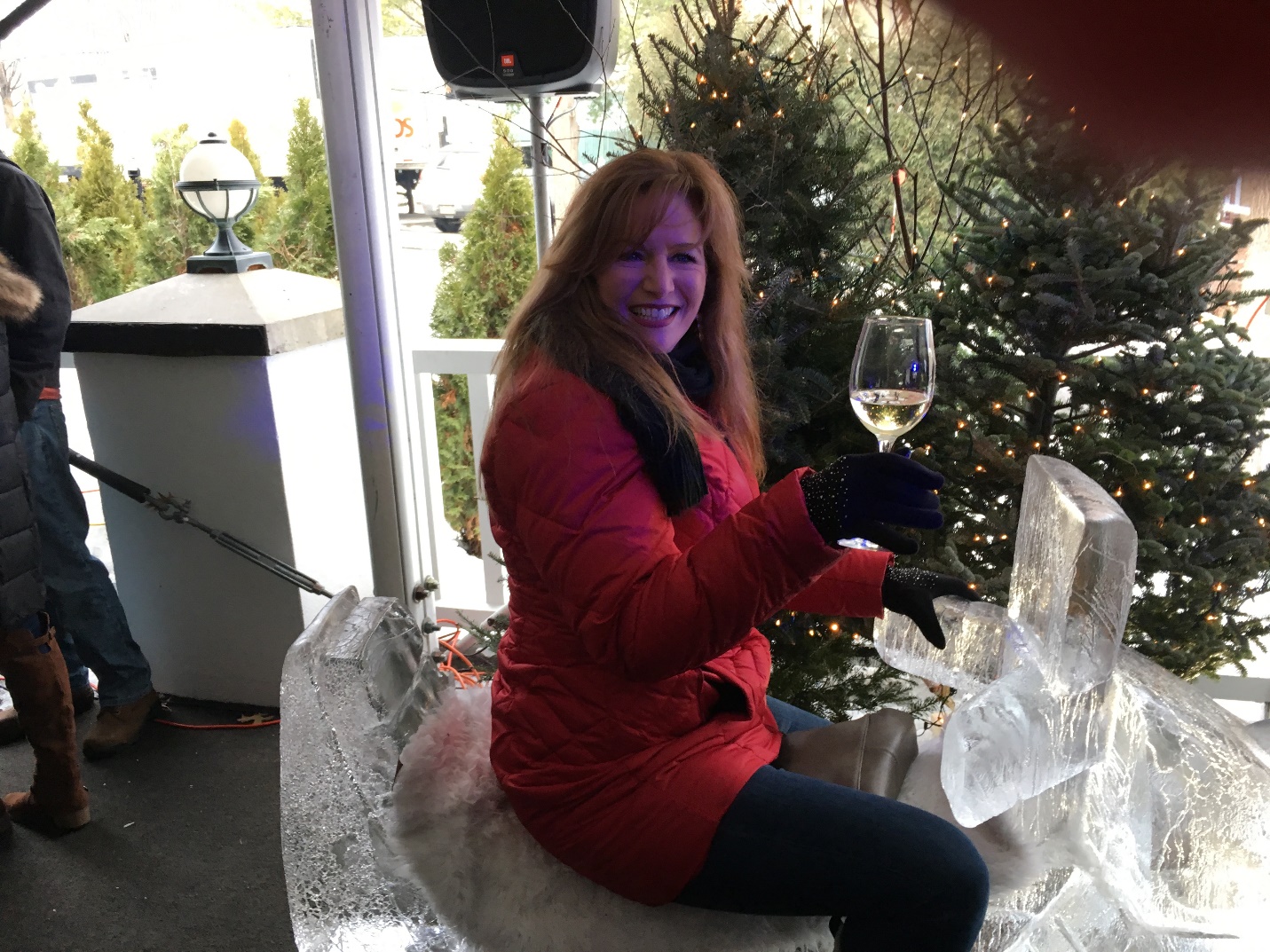 One of the wonderful things about the Glacier Ice Bar & Lounge is the festive atmosphere. Everyone is in a jubilant mood, and we struck up conversations and new friendships with people visiting from as nearby as Albany and as far as North Carolina and Ontario. The whole scene was reminiscent of the annual Quebec Ice Carnival, and I was thankful once again to be able to hop in my car and make the short 40-minute drive from Saratoga County to Bolton Landing to experience a glittering winter fantasyland. 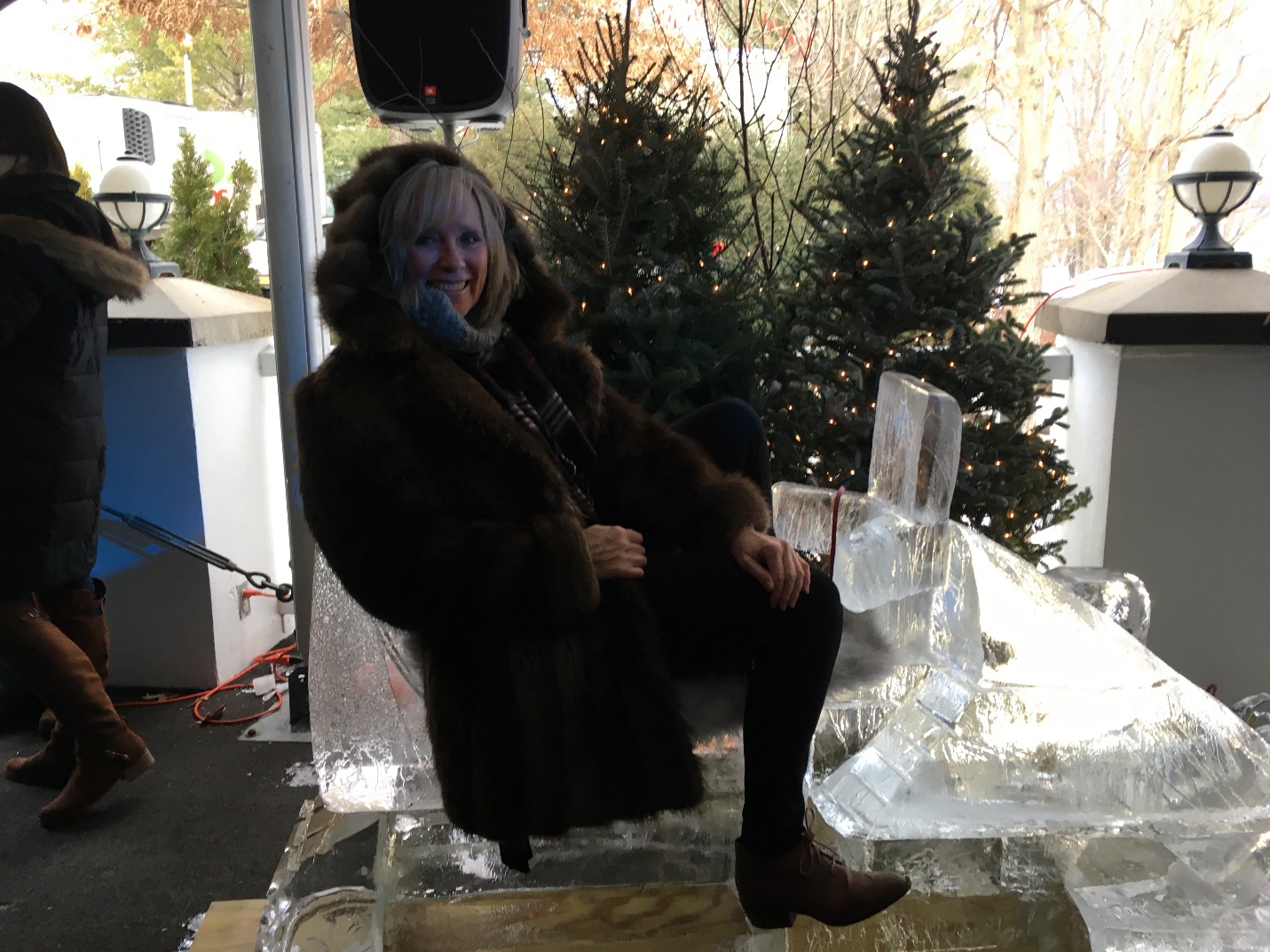 And speaking of Bolton, the village gets in on the winter act, with its own Bolton on Ice festival. After enjoying a cocktail and some amazing chili in the hotel, my friends and I ventured back over the bridge and into the village. We were so delighted that all the retail stores were open, and their winter sales were in full swing. The restaurants in town were overflowing with revelers who, no doubt, had the same idea we had. They were exploring the village, shopping, and maybe sampling some of the enticing appetizers and entrees on the menus.

As we wandered in and out of shops and restaurants, we approached Rogers Memorial Park, where a wood-carving exhibition was in full swing. Originally intended to be an ice-carving session, the weather had decided to take a slightly warmer turn, putting a “wet blanket” of sorts on the event. But the town of Bolton organizers were undaunted and, instead, they secured the artistry of Glenn Durlacher, owner of Glenn Tree Art in nearby Queensbury. 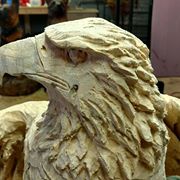 Glenn has been creating sculptures from trees for more than 30 years. Originally from Long Island, Glenn ironically began his career as an ice sculptor for the Marriott Hotel chain. His work has been a part of several First Night celebrations around the NY Capital Region, and he has created centerpieces for celebrity events around the Northeast, including Hillary Clinton’s senatorial campaign event in 2000.

For Bolton on Ice, Glenn decided to carve an iconic American image – the Bald Eagle – which was auctioned off for nearly $2,000. The proceeds from the auction went to the Town of Bolton’s community fund.

Once we’d had our fill of shopping, eating, more shopping, and sampling signature beers and cocktails, we wended our weary way back to the cozy comfort of the hotel fireplace, where the party was still in full swing and strains of music coming from the nearby saxophone player had us tapping our feet despite being tuckered out. And what better place to rest one’s head for the evening than in one of the wonderful rooms in the historic Sagamore! My friends had booked one of the rooms in the original hotel building, overlooking the expanse of frozen lake. While I’ve been fortunate to enjoy that view in summers past, I must admit that it was perhaps even more breathtaking to see the sunlight glint off the icy waters, undisturbed by the comings and goings of boaters, jet skiers, and parasailers.

It’s safe to say that it only took one visit to make the Glacier Ice Bar & Lounge and Bolton on Ice a new annual winter tradition for me. In the future, in addition to my returning friends, I’ll also have a large family contingent on hand. My eldest daughter and her hubby, and my youngest daughter and her beau will travel to the Lake George Area to spend the weekend skiing, skating, and sipping cocktails with family and friends. It’s nothing out of the ordinary for millennials like my girls and their guys to drive up from as far south as Manhattan to take advantage of all the Adirondacks have to offer. Add to that, the festival atmosphere of Bolton and the gracious Adirondack allure of the Sagamore, along with good music, great food, and friends and family in abundance, and you’ve got a winning recipe for a wintery destination getaway.

Looking for more icy fun? Stay the night and check out Funky Ice Fest or browse our list of other amazing ice bars in the Lake George area! 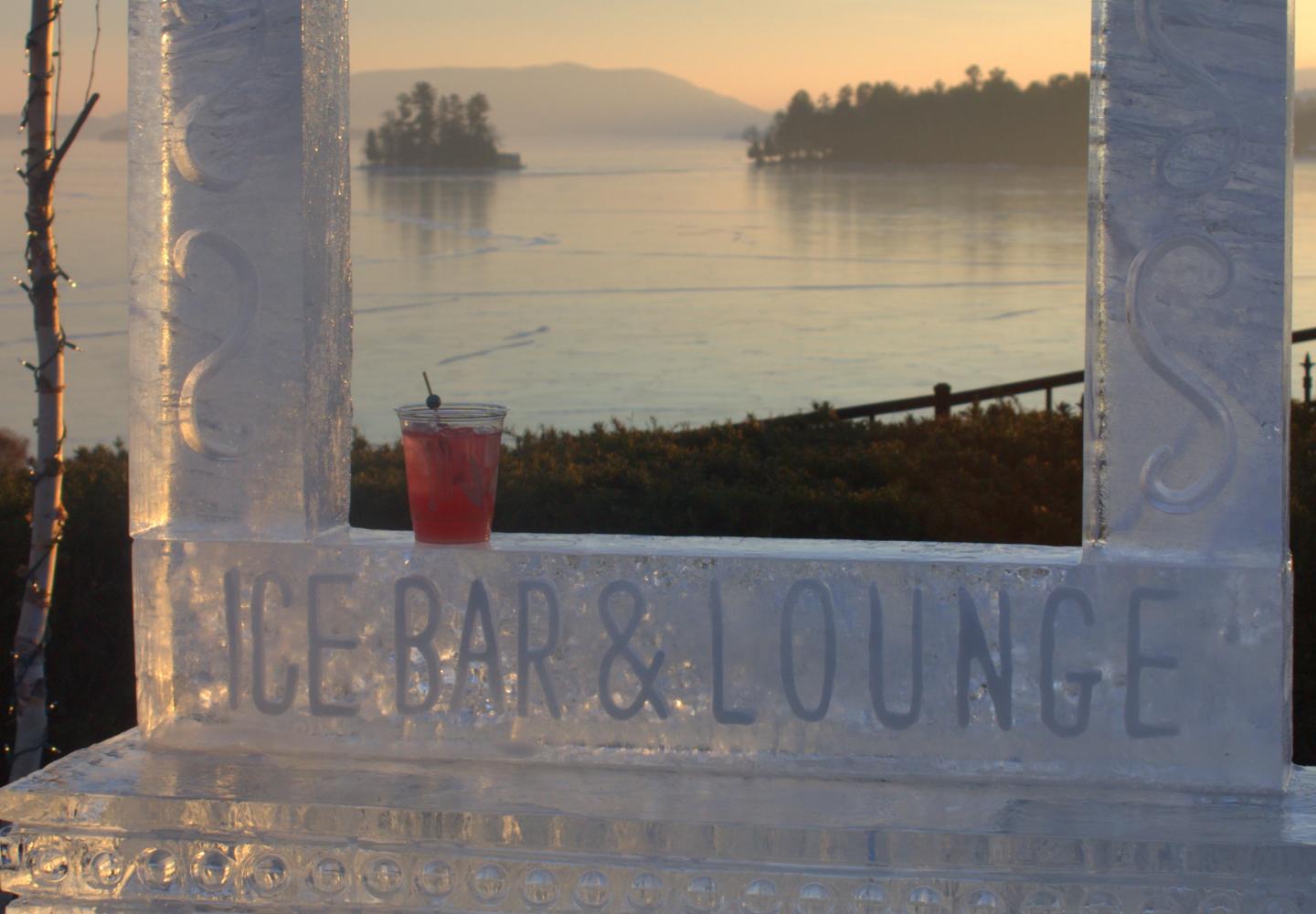 Pull up a stool at one of these frozen bars before it's too late.

Five Things to Know About Winter in the Lake George Area

A few things to know before you venture to the Lake George Area in those colder months.