This small town winter carnival is full of family fun

My fiancé and I wanted to experience an event we had never attended, so we chose the Brant Lake Winter Carnival. When we rounded a bend on Route 8 and saw the long stretch of cars lining the shoulder near Jimbo’s Club on the Point, we knew it was going to be a great afternoon. Jimbo’s Club on the Point is a gorgeous, Adirondack-style wedding venue, restaurant, and retreat. If everyone in Brant Lake and the surrounding community was at the Carnival, it was where we wanted to be, too. 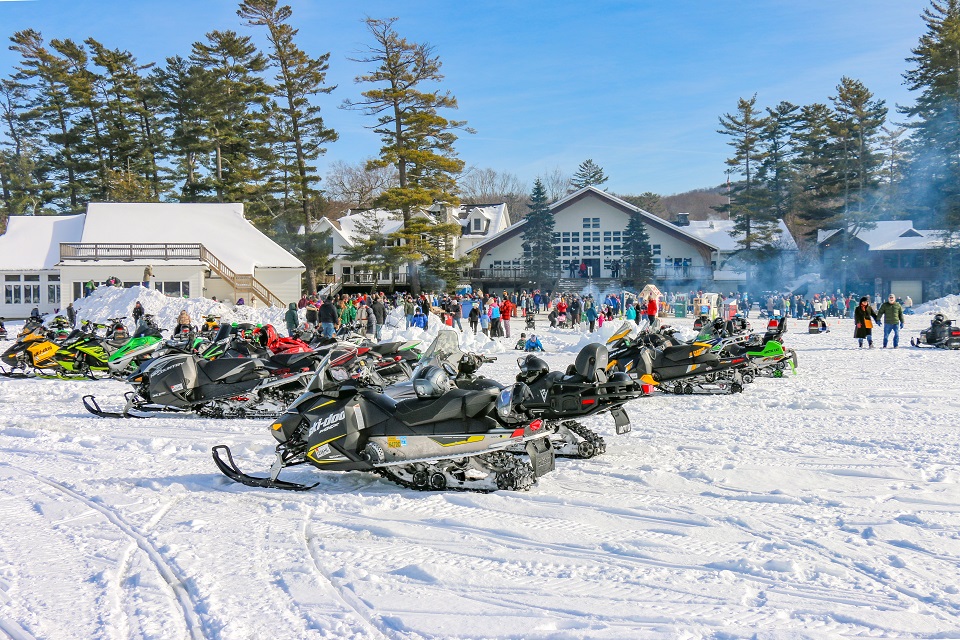 We slowly rolled past the string of cars hugging the guardrail, careful to give parents and their children plenty of room to walk toward the lake. We parked, pulled on warm gloves and thick jackets, and trudged toward Jimbo’s. 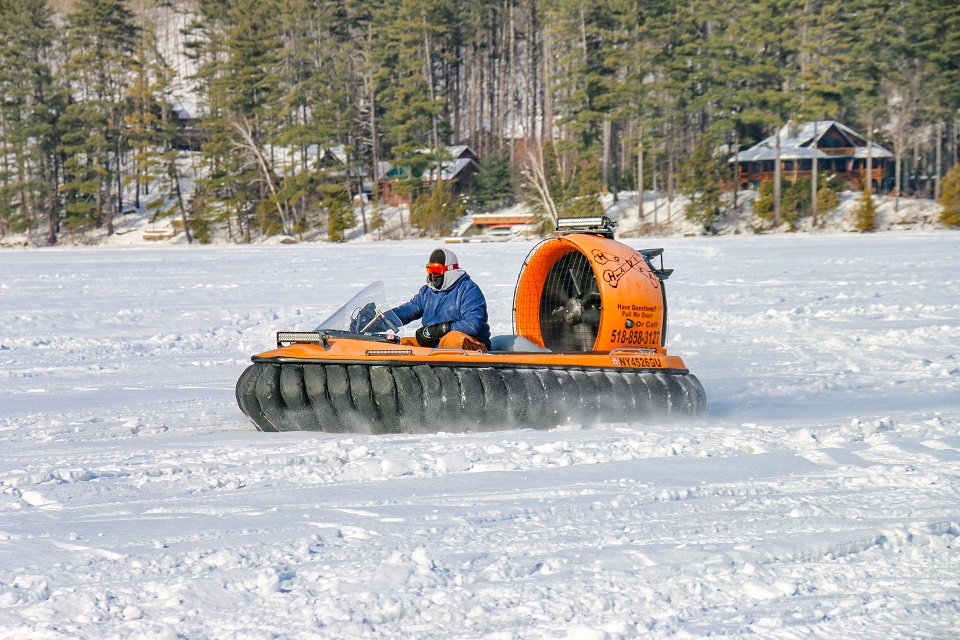 We carefully tiptoed down Jimbo’s long, icy driveway towards Brant Lake, following excited crowds of revelers. Each side of the driveway was lined with empty cabins and other buildings. The lake came into view after a short walk. Before venturing onto the ice we went into Jimbo’s to check the place out.

The inside of Jimbo’s was packed! The room reminded us of a huge Adirondack dining hall. It had horizontal wood paneling and a towering A-frame ceiling. A few dozen tables were buzzing with couples and families sipping on drinks or enjoying a sitdown lunch. Servers hustled back and forth from the kitchen to the dining room carrying beers, sodas, burgers, and sandwiches. A lucky group of people were huddled around the beautiful stone fireplace. A small corner bar served drinks to thirsty attendees. 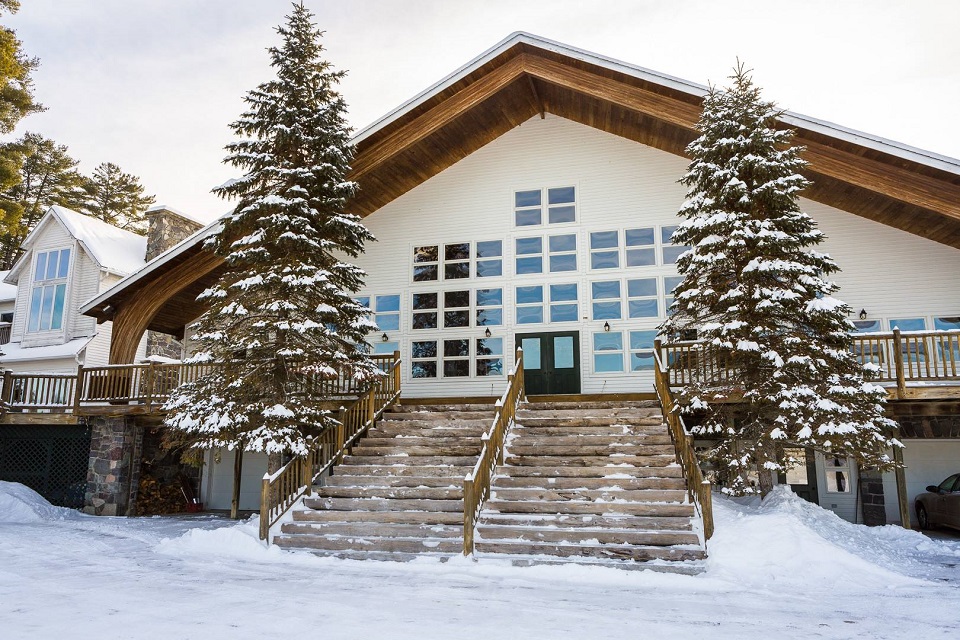 After strolling around the restaurant for a few minutes, we exited the building and found ourselves on a porch overlooking the Carnival. Two bonfires were burning and a stage was set up for event winners. A large staircase descended toward the beach. The beach was loaded with Carnival attendees! Families, couples, and dogs took part in the fun and entertainment. We walked down the steps and started wandering around watching events.

We started at the left side of the carnival and worked our way to the right. Our first stop was the skating and hockey rink. People were skating laps and passing a puck around the plowed, square rink. There was no skill necessary, and all the shots on goal were done in pure fun. Everyone was laughing and having a great time while they skated. When we walked away more people were sitting in the soft snow, frantically pulling their ice skates on, ready to join the action. 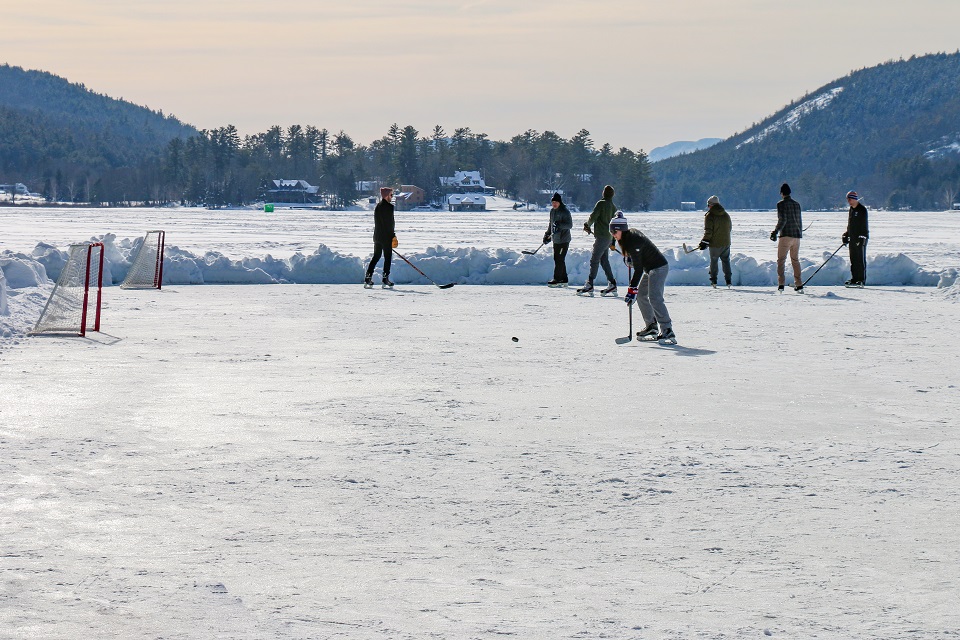 Next, we wandered over to the giant chess board, which featured huge replicas of chess pieces placed on mats in the snow. There was no one at the chessboard because of the activity next to it: Adirondack curling. Teams slid a heavy stone across the plowed sheet of ice and used brooms to help move the stone at the correct speed. We didn't think there were any future Olympians at the Adirondack curling rink, but everyone was having a great time anyway. 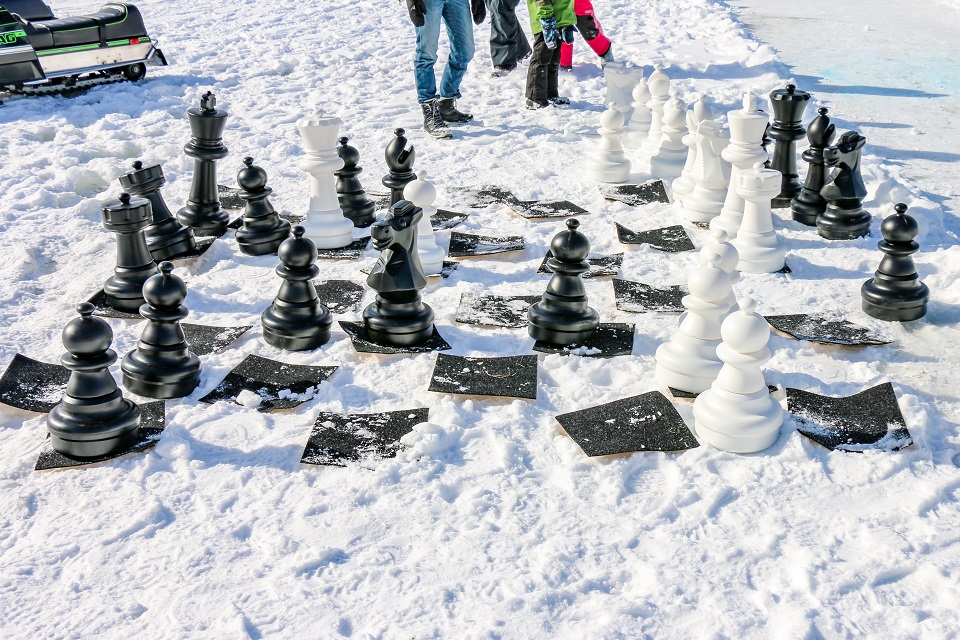 Behind the chess board were the vintage snowmobiles. An awesome looking black and white Arctic Cat JAG, and several sweet Polaris sleds sat parked on a patch of snow. There was supposed to be a vintage snowmobile parade, but we either missed it or the parade didn't happen. 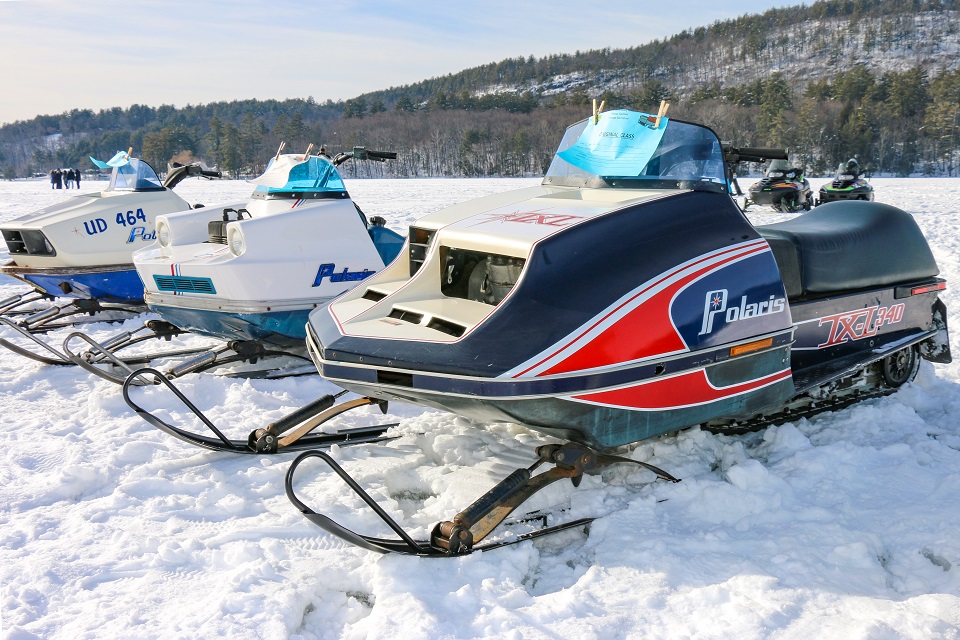 Next, we went to the bowling alley. A few kids decked out in thick, bright bright snowsuits were rolling bowling balls down the icy lane. Banks of snow created perfect natural bumpers. A few slipped and fell after they released the balls. It didn’t matter if they hit the pins at the end of the lane or not, they were having a great time. 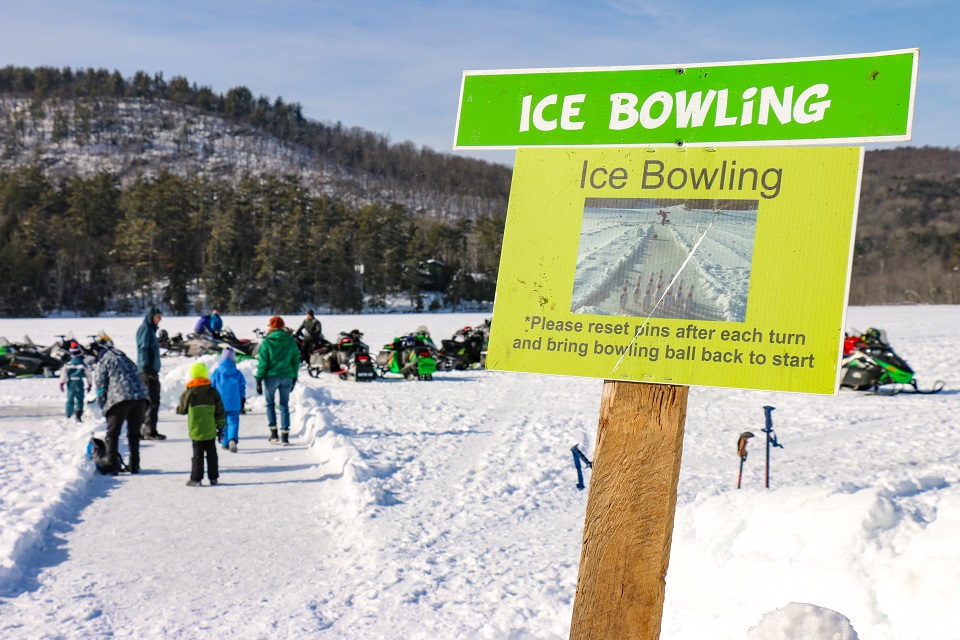 There was more fun to be had on the human foosball court. A rectangular box held about ten people who worked to kick a ball through goals on both sides of the box. The participants, holding poles that spanned the width of the box, kicked and thrashed their feet at the ball without much success. 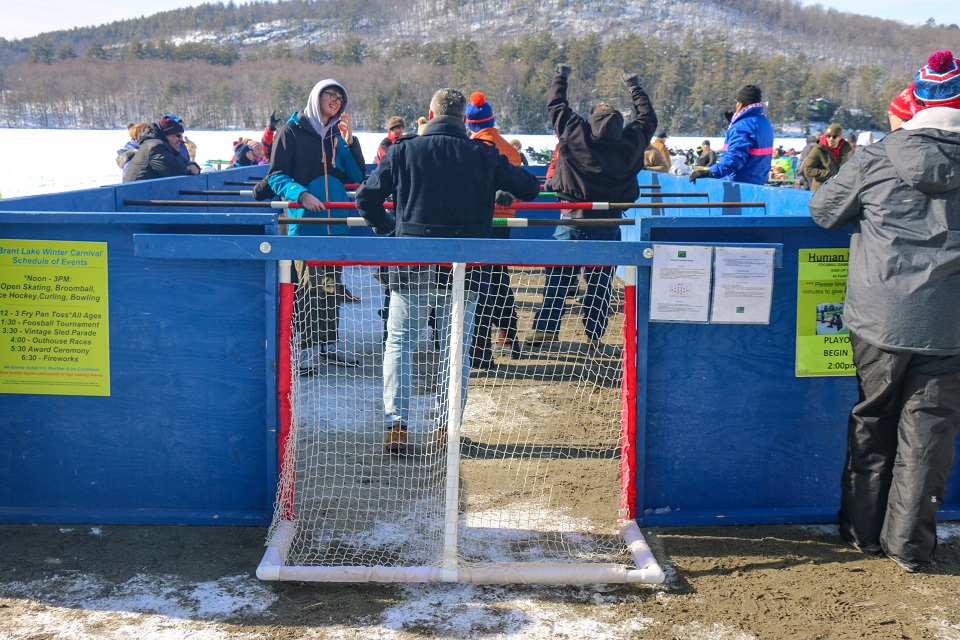 There's so much more to do! We missed the fry pan toss, where participants do exactly what it sounds like. Kids were cruising down a giant sledding hill and wiping out at the bottom, families were watching snowmobiles rip across the frozen lake, and more. But most importantly, it was time for the outhouse races. 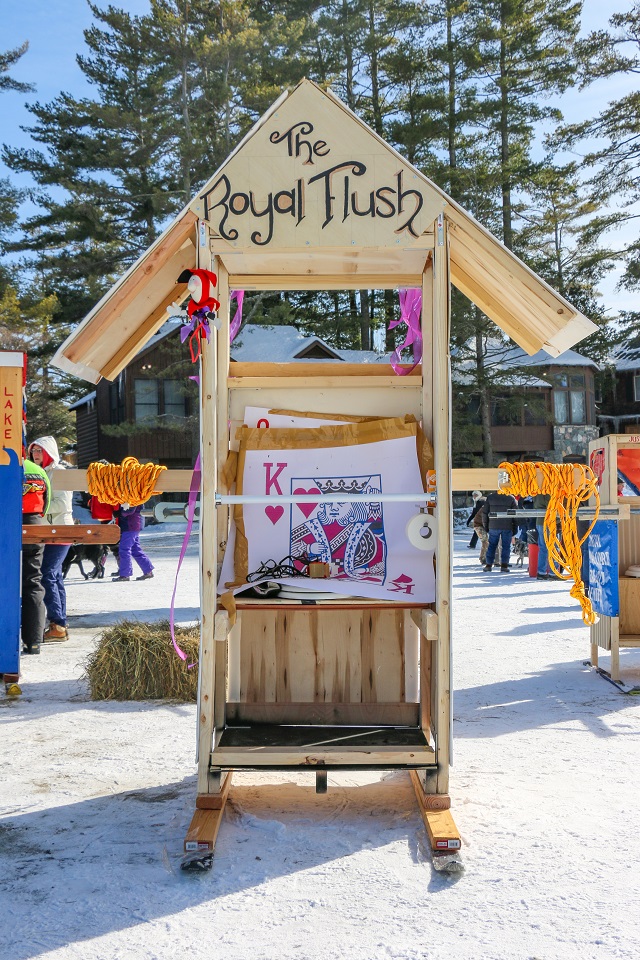 The outhouse races are, hands down, the most fun event at the Brant Lake Winter Carnival. Literal outhouses attached to snow skis are pushed by racers down a long track, with one helmeted rider sitting inside the outhouse. Each outhouse has a team name and theme, ranging from “The Royal Flush” decked out in cards, to a Loon Lake themed outhouse. Two outhouse teams race one another down the track lined with spectators. A judge stands in front of the outhouses in between their tracks, counts down from three, and the race is on. Outhouses are eliminated after a loss, and eventually a winner is crowned. 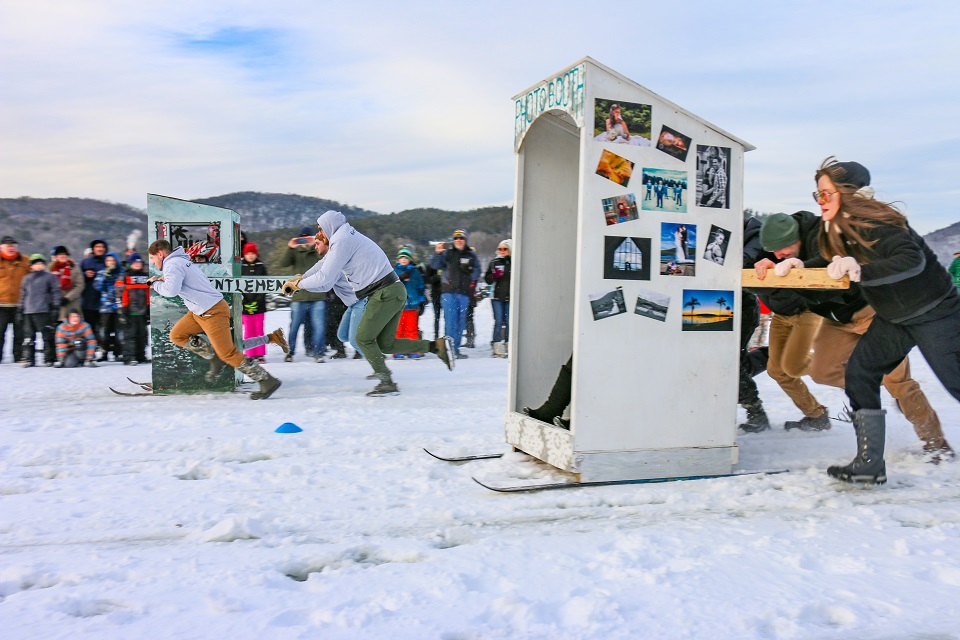 The sun started to set behind the trees and the temperature began to drop, so we headed for the car after a few outhouse races. We weren’t the only ones. It was a great couple of hours in Brant Lake, and we talked about attending the following year with friends. The Brant Lake Winter Carnival is best spent with friends. 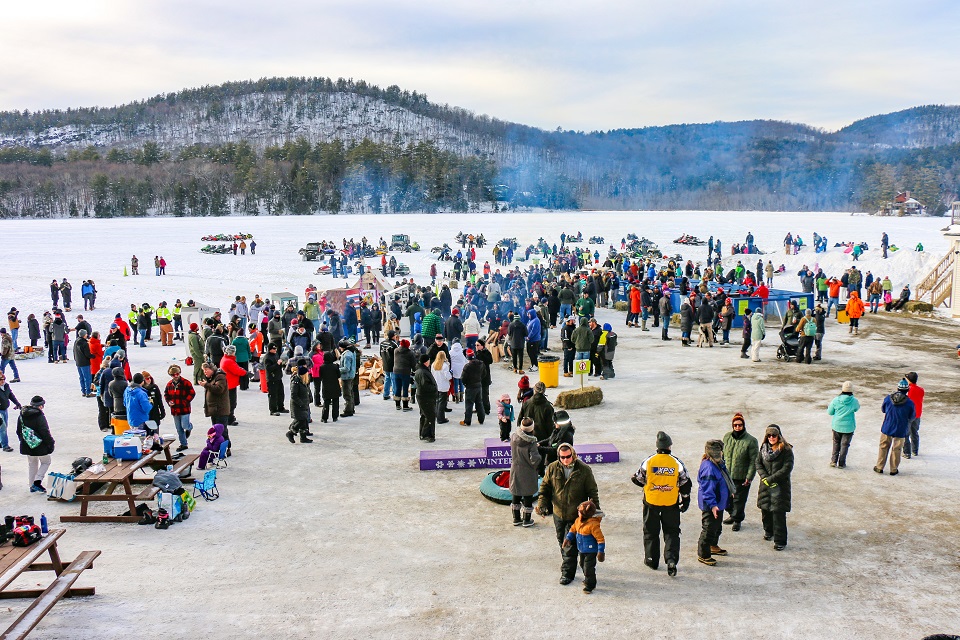